Preserving Hawaii’s Biodiversity Is Up To Us - Honolulu Civil Beat

Preserving Hawaii’s Biodiversity Is Up To Us

The recent delisting of 23 native species in our islands is just the tip of the iceberg.

When the U.S. Fish and Wildlife Service announced plans to delist 23 species from the endangered species list due to their presumed extinction, it highlighted the importance of preserving biodiversity and supporting conservation.

Among the species slated for delisting, one-third of them (eight birds and one plant) are known only in Hawaii. The disproportionately large number of extinct Hawaiian species, relative to the islands’ geographic size, is illustrative of why Hawaii has been given the unfortunate moniker “the extinction capital of the world.”

Those 23 species are just the tip of the iceberg. Today, one-third of Hawaii’s more than 1,300 native plants are listed as threatened or endangered, with many species still unassessed. Because nearly 90% of Hawaii’s plants are endemic (found nowhere but here), biodiversity and conservation are tangible concepts that underscore the notion that extinction is forever.

As a Hawaii-based environmental nonprofit organization dedicated to saving plants, we at the National Tropical Botanical Garden couldn’t help but notice that only one of the species to be delisted was a plant. It has been well documented that when it comes to wildlife and conservation, plants are often overlooked by the public in favor of charismatic animals.

According to Botanical Garden Conservation International, there are more threatened tree species than mammals, birds, amphibians, and reptiles on Earth combined.

This week’s announcement raises many important points. Accelerated extinction and the loss of biodiversity is not just tragic for individual species, but can threaten whole ecosystems, with broad implications beyond.

Birds like the Kauai amakihi, iiwi, anianiau, and elepaio are just a few of the species that are part of a larger suite of living creatures that make Hawaii’s biodiversity a unique and important part of our world.

The impact of degrading entire ecosystems is exemplified by the disruption of relationships between birds and plants. Birds rely on plants for feeding, breeding, and nesting. Plants depend on birds to distribute their seeds, pollinate their flowers, and more.

Hawaii’s high level of endemism is a reflection of the unique and specialized relationships formed by plants and animals as they co-evolved isolated from continental influences. One plant NTBG works closely with, the cliff-dwelling alula (Brighamia insignis), known only on Kauai and Niihau, illustrates this concept. Although alula have been widely cultivated and we continue to conduct research on the species, today alula and its presumed pollinator, a sphinx moth, are believed to be extinct in the wild.

At the same time, we know from our own field work that rare and endangered plants that were believed to have been lost have been rediscovered decades later.

More than 50 native Hawaiian plant species have not been observed in over a century.

Increasingly, conservationists and scientists in Hawaii are using drones and other new technology to find and monitor endangered plant populations that were previously unknown or thought to have gone extinct. We learned this firsthand in 2019 when our scientists used a drone to rediscover a Hibiscus relative that had been considered to be extinct in the wild.

In the two years since then, discoveries and rediscoveries continue to be made and exciting new technology holds promise for future successes.

One of the most important ways to stem the tide of extinction and preserve as much biodiversity as possible, is through collaboration. NTBG works closely with federal and state agencies, as well as conservation and science-focused institutions and organizations, large and small.

The challenges before us are simply too large, too complex, and too numerous to face alone.

Also important in preventing more extinction, is funding. Ultimately, much of the work needed to protect endangered species comes down to financial support.

The question is: what are our priorities and what are we going to fund, even at the expense of something else.

Among our top priorities, not only in Hawaii, but around the world, we believe, should be the preservation of biodiversity and our natural environment.

Plants, animals, and other living creatures play a direct and indirect role in our own wellbeing, from everything as basic as the air we breathe, the water we drink, and the food and medicine that sustains and heals us, to how we live, and the future we will pass on to our children, grandchildren, and the generations that follow.

The decision to prioritize saving biodiversity and preserving the natural world may be the most important choice before us and is ours alone to make. 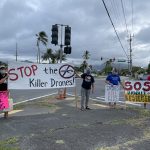 Chad Blair: Do We Really Want Deadly Drones Based In Hawaii?

This article reminds me of a Presidential policy from 29 years ago.The biggest failure of that administration's policy was the lost/lack of support for the National Land Use bill - it would have placed all land regardless of state subject to the same conditions of use and aided today's issues increasingly critical environmental losses."The time has come to increase the technological resources allocated to the challenges of meeting high-priority domestic needs. In my (Nixon's) State of the Union Message last month, I announced an expanded Federal research and development commitment for this purpose. There is great potential for achievement through technology in the fight against pollution and the larger drive for quality in our environment."

"the extinction capital of the world." I couldn't help but think after reading this anthropomorphic sentimentality for the plant species disappearing in Hawaii, that at the same time, Hawaii is also the invasive species capital of the world.DLNR has a list of invasive species that are so common that we don't realize they are considered invasive.Formosan Koa, Hilo Holly, Asparagus fern, Ironwood, night blooming jasmine, ginger, mock orange, blackberries, Christmas berries, African Tulip, Mexican creeper, and the list goes on and on.Since bio-diversity is an ever changing dynamic of populations in flux, with some disappearing and new ones being introduced, causing imbalances and disruptions of established bio-systems, and the universal biological mandate to procreate and migrate, it makes me wonder about the wonder of it all.