Denby Fawcett: Why Doesn't The City Crack Down On Commercial Uses Of Parks? - Honolulu Civil Beat

Denby Fawcett: Why Doesn't The City Crack Down On Commercial Uses Of Parks?

A number of businesses from surf schools to yoga classes have set up shop in Kapiolani Park without permits, with few consequences. 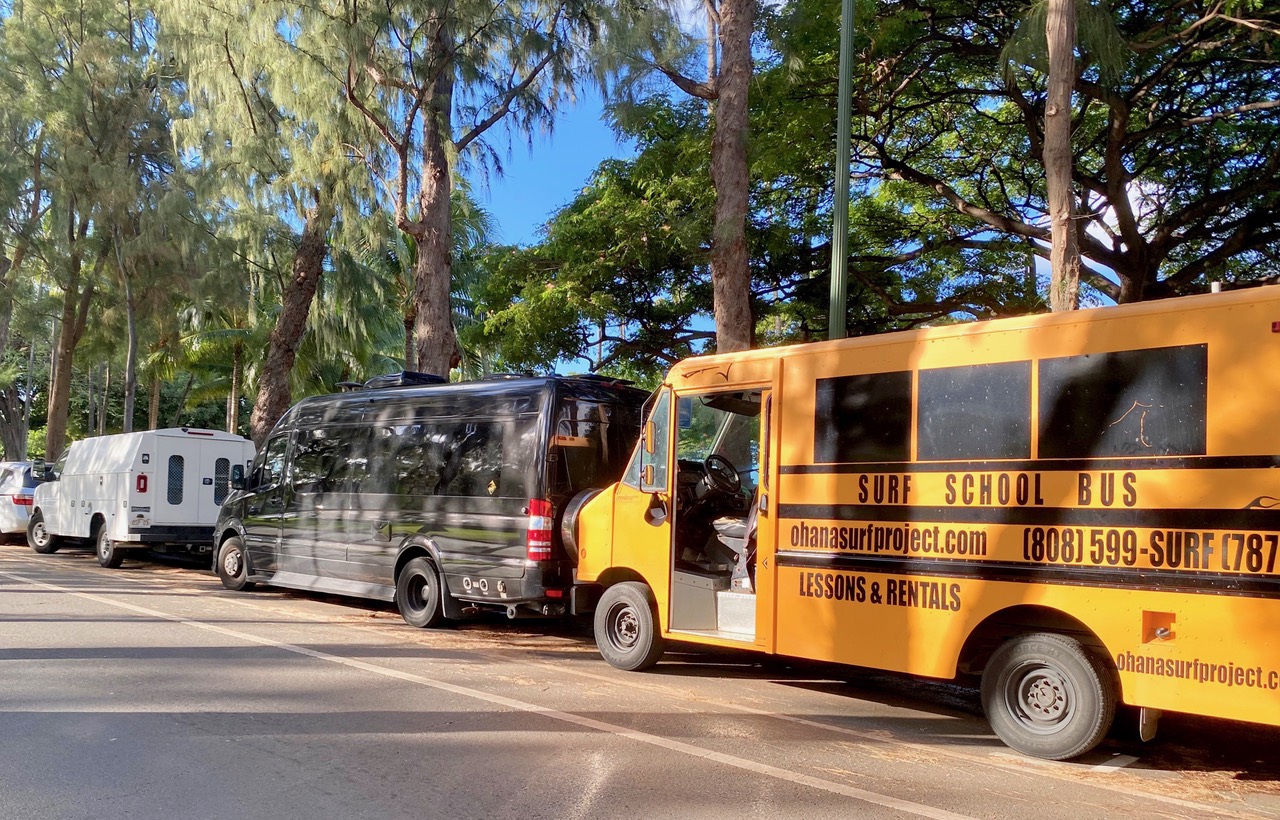 Such violations are wrong on a number of levels. The businesses are taking up parking spaces meant for the public to use to enjoy the park. Some of the businesses don’t pay taxes, and others lack required state and city permits to do commercial business in public places. Their operations give them an unfair advantage over other businesses that pay rent and abide by city and state laws.

The City and County of Honolulu has clear permitting requirements to regulate commercial activities in Oahu’s public parks.

Private businesses and community groups must have city permits if they want to sell products or services in parks.

But despite the regulations, many businesses operate without permits in Kapiolani Park, including yoga classes, surf schools and commercial surf photographers.

Alethea Rebman, president of the Kapiolani Park Preservation Society, says the society has documented at least 30 businesses operating in the park at different times without permits.

“It’s frustrating to see businesses selling tickets on Eventbrite and others giving the Park as their business address,” Rebman wrote in an email.

Rebman says the city is turning a blind eye to businesses operating openly in the park which, she says, is against the city’s own ordinances prohibiting issuing permits for surf schools at a number of beaches, including Queen’s Surf Beach in Kapiolani Park.

Kapiolani Park Preservation Society is a nonprofit watchdog group whose mission is to preserve the terms of the Kapiolani Park Trust — to keep the park free and open to the public forever.

The society has been active for 40 years and in 2009 won a state Supreme Court decision to halt Hans Hedemann Surf Inc. from operating  in violation of the city zoning law at the Kaimana Beach Hotel in Kapiolani Park.

The city said only one of three surf schools I saw doing business during four different visits to Kapiolani Park last week had a city permit: Pro Surf School Hawaii.

Businesses operating in parks not only must have city permits but also must be ready to show the permits when asked. And if they are running commercial operations in the ocean, including surfing lessons, they need a commercial-use permit from the Department of Land and Natural Resources Division of Boating and Ocean Recreation.

“In response to numerous community members expressing concern, I have asked parks director Laura Thielen to take action against these illegal commercial businesses at Kapiolani Park,” Waters said in an emailed statement. “I have subsequently brought this issue up with the Mayor and Managing Director, and I am confident that with their being aware of the situation, the issue will be remedied.”

Kapiolani Park is run differently than all other city parks. The park is a charitable trust operating under the state probate court’s jurisdiction. The trustees of Kapiolani Park are the nine Honolulu City Council members, but the city’s Parks and Recreation Department is responsible for the day-to-day management, except for the zoo and the Waikiki Shell, which are managed by the city’s Department of Enterprise Services.

When I asked Parks Director Thielen what she is doing to halt illegal commerce in Kapiolani Park, she responded in an email:

“We work with the Honolulu Police Department on enforcement and have park rangers in select parks, including at Kapiolani Park. These park rangers do not have citation powers, but are primarily used to inform the public of park rules.”

Two park rangers are assigned to Kapiolani Park seven days a week, but they are in the park only during daylight hours and, as Thielen says, have no authority to stop prohibited activities. They depend on HPD for that.

After I asked HPD in several emails what it was doing to enforce the commercial businesses permit and parking violations in Kapiolani Park, HPD spokeswoman Michelle Yu wrote in an email Monday afternoon that HPD earlier that day had cited several employees from two surfing businesses for conducting commercial activity within a park without permits. She did not identify the businesses.

She said parking citations were also issued to company vehicles. The commercial activity citations require a court appearance on Dec. 6 and can carry fines of up to $500. The parking fines range from $35 to $50. Yu said police officers spoke with one of the owners and will continue to check the area periodically.

Thielen says enforcement of commercial operations can be difficult.

“We prohibit the exchange of monies for a service in the parks, but many of these businesses are nonprofits that operate on donations. It can be difficult determining a paid class from a group of people using a park space for communal exercise,” she wrote.

It should not be so difficult when many of the businesses I looked up online clearly stated their location in Kapiolani Park and listed the different fees they were charging for their services.

In her email, Thielen said she has been working with Waters, who she says has asked various state departments to verify if the businesses operating in Kapiolani Park have all the required licenses.

“We hope that this regulatory method is an effective way of alerting these businesses that we are monitoring their actions,” she wrote.

The Hawaii Department of Taxation cracked down on 25 businesses from Ala Wai Boat Harbor to Kapiolani Park on Aug. 19 for operating without general excise tax licenses. But the department would not provide the names of the businesses it found in Kapiolani Park in violation of tax law.

The surf school called Ohana Surf Project monopolizes three public parking spaces in a row every morning in the park behind the Barefoot Beach Cafe. The vehicles remain parked all day. On its website, Ohana Surf Project calls the black Mercedes Benz van regularly parked in one of the three free parking stalls its “mobile office.”

It also sets up a tent on the grass in the park and lists Kapiolani Park’s address as its business address.

Ohana Surf Project owner Sean Anderson says he doesn’t need a city permit since he is not doing business in the park. He says all the company’s transactions are done online.

The city says Ohana Surf Project does not have a city permit to operate in the park. The state says the company has the required commercial-use permit but only in the ocean, not on park land.

During the time I watched the Ohana Surf Project’s operation, none of its three vehicles was ticketed by HPD for overstaying the two-hour parking limit.

“The free parking spaces were meant to be for residents, including families coming to the park for picnics and to swim with their children,” said Donna Ching, a regular park user and a board member of the Kapiolani Park Preservation Society. “The parking places are not supposed to be for businesses to use all day, every day.”

Currently there are two bills pending approval in the City Council to ban commercial activities at parks in Waimanalo from Makapuu Beach Park to Bellows Field Beach Park (Bill 38) and on the North Shore from Sunset Point to Kaiaka Point (Bill 34).

Council Chair Waters said, “I look forward to hearing from the City Administration if it needs laws to be changed so that they can effectively utilize the $500,000 we appropriated in the budget for park rangers to conduct enforcement.”

That alone would make a difference because all park rangers can do now is remind scofflaws they are breaking the rules, they can’t do anything to stop them. 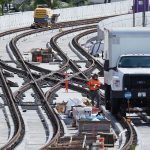 Denby I donât know any other way to contact you but wanted to express my appreciation for your article on the invasive birds. I just hope that the state will see this as a worsening threat and take action like Kauai did.

Bottom line to this problem as well as the vast majority of Hawaiiâs problems is too many people!

Sounds like a typical Gold Coast attitude represented here. A little entitlement mixed with a little indignation. Some people have nothing better to concern themselves with than making it hard on local people trying to make a living. These people have been coming to Hawaii for generations and itâs the same old story. The minute they move in they instantly want to control everything they see. Always trying to regulate us, our businesses, and our culture which, by the way, here on Oahu (and especially in the Waikiki area) is about sharing aloha and surfing with our friends, families and visitors. Thereâs no aloha in trying to hurt peopleâs ability to make a living especially doing something that doesnât hurt anyone like yoga or surfing. One last thing, the parking problem is because of all the big, mostly foreign, businesses in Waikiki not a couple local companies, a couple of surf vans, and a yoga class.