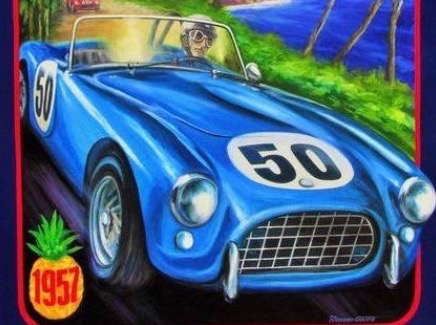 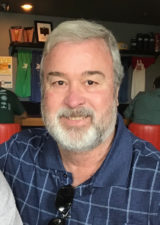 Anyone familiar with the 2019 movie “Ford v Ferrari” knows the contribution of race car drivers Carroll Shelby and Ken Miles to motorsports. What most people don’t know about are their extensive activities in Hawaii during the late 1950s and early 1960s.

I had no idea either. My curiosity was aroused by a social media image of the “Kahuku Point Pineapple Grand Prix” depicting a ’50s-era AC Ace tooling around tropical oceanfront scenery. Was this a real thing, or simply a fantasy poster created by an imaginative artist?

My Google search initially conjured up Episode 42 of the anime “Speed Racer” where our hero enters the “Pineapple Grand Prix” somewhere in South America. For some reason the cartoon racers were required to have a pineapple in their car during the race. Some nefarious individuals have hidden a diamond in one of the pineapples leading to various attempts at thievery and other high jinks. Exciting stuff, but not useful in verifying the Kahuku racing story.

Like many old military runways at the close of World War II, Dillingham Field at Mokuleia and an airstrip at Kahuku Point fell into disuse. The long, flat slabs of concrete were immediately set upon by Hawaii’s motorsport enthusiasts, first by drag racers and later by sports car road racing clubs.

As the tracks improved and participation picked up both venues started to attract the big boys. Now, fully sanctioned by the Sports Car Club of America, the Hawaii events were part of the major “airfield circuit.”

Among the first to arrive was the John Edgar race team from California. Edgar was a wealthy aficionado of exotic race cars, a hobby that, in turn, attracts the best drivers. This included the legendary Carroll Shelby and his sidekick Ken Miles. Also, on the Egdar team was the equally talented Phil Hill.

Ken Miles, as depicted in the movie, was sabotaged by a bone-headed PR stunt concocted by the Ford suits and came in second on a technicality. The previous year, Miles had been passed over completely by the Ford execs who sent Phil Hill and Bruce McLaren to pilot the latest version of their Ford GT.

That year all the Fords failed to finish, as predicted by Miles. But in the late ’50s, here were some of the best race car drivers in the world, just prior to their championship runs, honing their skills on the North Shore of Oahu.

In 1957 John Edgar packed his team, a Maserati 300s, a Ferrari 410, an older Ferrari 847s and a couple of Porsches onto the SS Lurline and set off for the Territory of Hawaii.

They were also expecting the delayed delivery of a monster Maserati 450s for Shelby to use to humiliate the competition. The team set up camp in the Royal Hawaiian Hotel and began prepping for their debut in Hawaii Speed Week. Most of the “prepping” involved drinking heavily, partying and hanging out with Duke Kahanamoku.

The Edgar team transported the cars to Dillingham Field for a week of racing. Miles won his class in a Porsche and set the stage for the more powerful race cars to cap the week.

Edgar’s contract with Maserati explicitly stated he could not use any Ferraris or risk scuttling his deal, which would have changed the delivery date of the much anticipated 450s from late to never.

With no 450s in sight Edgar decided to put Shelby in the underpowered Maser 300s. He did, however, test the waters by letting Hill do the qualifying runs in the Ferrari, which clocked in at 165.12 mph, easily the fastest car on the track. However, as the start time for the “Gold Cup Challenge” finale neared, Edgar got cold feet and pulled the Ferrari and Hill. Shelby finished in third place in the 300s, missing second by a mere whisker.

I found a printed program from the “First Running” of the Kahuku Point Sports Car Races dated Sept. 2, 1956. So, clearly, road racing was going strong at both old runways from 1956 to around 1963. There are accounts of both Shelby and Miles racing at Kahuku, with Miles in an AC Ace and Shelby in a Maserati. The driver in the “Pineapple Grand Prix” poster looks suspiciously like Ken Miles.

Shelby and Miles went on to become partners in the creation of the AC Cobra, which was the AC Ace chassis with various versions of a V8 stuffed into it. One of the first 1961 versions featured a massive 6.4 Liter Ford V8, which Miles raced at Sebring. He pronounced the car “un-drivable,” and nicknamed it “the Turd.” But things did get better.

They continued to polish and perfect the AC Cobra and eventually did race these iconic cars at Kahuku. In 1963, in one of the last events staged there, they won all three top spots with Cobras.

Things changed fast after 1963, and with the construction of Hawaii Raceway Park and plans for a new resort at Kahuku underway, the old runway tracks finally shut down. The roar of engines and the screech of tires gave way to the tranquility of golf and refinement of polo.

The North Shore, as we all now know it, gives no clue as to its past incarnation as a hot spot for the noisy and exciting world of auto racing and the bold and impetuous characters that made it go. 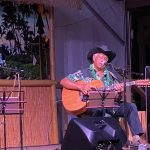 Spent many a weekend in the "pits" at Kahuku and vaguely remember a Shelby Cobra stored in our garage for a friend of my dadâs who was deployed.  Great memories but probably better that this area has gone back to the birds . . .