Neal Milner: What The Honolulu Marathon Says About Hawaii

This year's race, set for Dec. 11-12, will undoubtedly return to the pre-pandemic levels of crowds, noise and hundreds of runners. 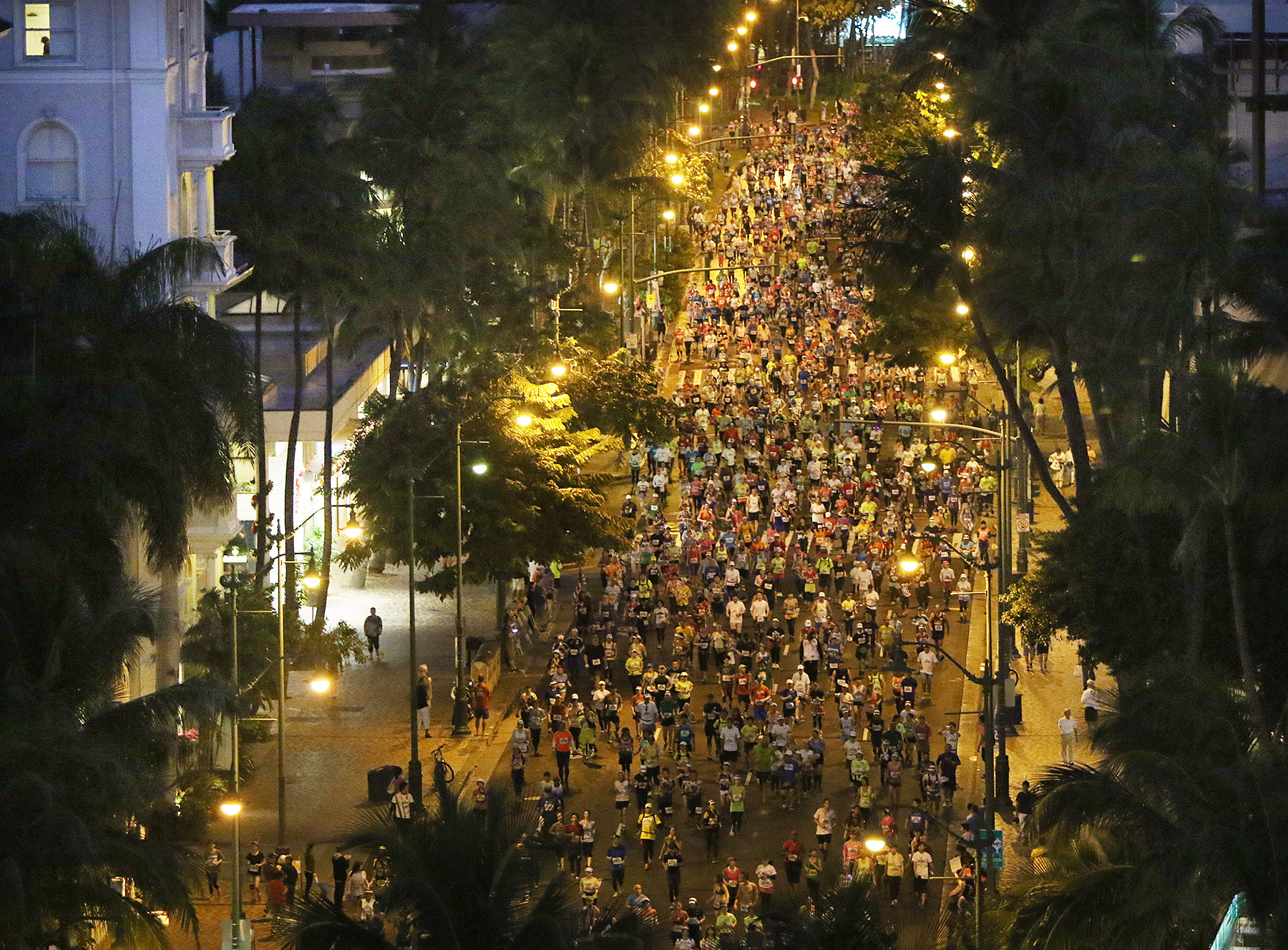 A few days ago, I was talking to my friend Heidi about the upcoming Honolulu Marathon, which will be live and in person for the first time since the coronavirus pandemic began.

She suggested I write about it because I was present at the creation. I ran in the first Honolulu Marathon, along with just 150 or so other runners, back in December 1973.

The marathon was simple then. It’s far from simple today in ways that are understandable. Still, the modern Honolulu marathon makes me wistful and a little sad.

I want to reflect on what the marathon has become, how what it’s become mirrors what Honolulu has become over the close to 50 years since that first race.

I remember very little about that 1973 race, not because it was such an overwhelming blur, but because things were so ordinary.

It was more like a very long, hard, quiet Sunday run with a small group of runners, many of whom, like me, did not really know what the hell we were doing.

The race was in its own small way very well organized, but organization was not at the center of things. The start looked like a small group of people milling about, getting ready for a couple of laps around Kapiolani Park or a hillier run around Diamond Head.

One runner was dressed in black socks and dress shoes, which was a little odd but tame compared to the Mardi Gras costuming and selfie ceremonials that have become so much a part of the race today.

At the finish we runners all got mango bread that one of the runner’s mom had baked. From there we had to traipse to the award ceremony, which was at Ala Moana Park.

A big accomplishment, but no big thing.

Today of course it is a big thing, a hugely big thing.

The number of runners in each recent Honolulu Marathon would almost fill Aloha Stadium. The 1973 group wouldn’t have filled the seats in the Kaiser High School cafetorium.

The marathon has become a fete, a super event, with crowds lining the streets, music, a real celebration and a not so small army of volunteers making it happen.

I ran a couple of Honolulu Marathons after that first one. I did really well in my second one, finishing a few minutes off Boston Marathon qualifying time.

“With a little harder work, a more organized training plan, I could …”

That never happened. I quit running marathons because I missed what that first one was like and hated what the Honolulu Marathon had become.

To say I hate it is not to say I criticize it. The race is superb, moving and caring for thousands of runners in hot, humid weather, arranging for hundreds of volunteers, working with politicians and first responders.

But all that is not me, which brings me back to my two most lasting memories of the 1973 run, which will help you understand my admiration for the marathon and my wistfulness over what it has become.

First memory: Joy was pregnant with our second child. The due date was two weeks after the race, but four years earlier almost to the day our son was suddenly born a month early, very surprisingly and very fast.

What would happen if Joy went into labor while I was on the course? Well, not much from my end.

That’s not me. I don’t want to be part of a crowd. The hoopla, cheering, noise and camaraderie of being nose-to-tail with dozens of runners makes me uncomfortable.

Our plan if you could call it that was this: If she went into labor, she would call 911 and ask the police to find me. During the race I would check in by calling her once, from the bank of pay phones across from the Aina Haina fire station.

Zany and about as likely to succeed as — okay, I’m going to say it — rail.

Imagine a Honolulu Police Department SWAT team van, blue lights flashing, driving down Kalanianaole Highway looking for a 9-minutes-per-mile skinny guy in a cheesy, cheap pair of imported Japanese running shoes. Lassie had a much better shot of finding Timmy no matter what deep well that cute, careless little boy had fallen into.

(Incidentally, at that time the ambulance stationed at that fire station across from the pay phones was one of those swell pre-EMT, hearse-like Cadillacs you see in old noir films.)

I remember this so vividly because it’s such a strong reminder of what Hawaii was like at the time. I miss those pay phone-reliant times when you couldn’t be constantly tracked, alerted and informed.

It’s now a relief — a luxury — not to easily be found.

My other memory is about getting lost. I ran most of the race with my friend Jim who had talked me into running a marathon because we would get a free T-shirt.

For most of the run there were few if any other runners within shouting distance. Near the 16-mile mark, about where the Hawaii Kai Safeway store is now, Jim said, “we haven’t seen another runner at all for a long time.”

It turns out we were lost. Never mind the logistics, we took the wrong turn and should not have been on that road at all.

Jim and I stopped, figured out our mistake, did some seat-of-the-running-pants calculations, and decided that the distance on our accidental route was about the same as the real route.

We also decided that — big surprise — we weren’t in contention. Plus, no one would ever know or even care. (In fact, there is no official list of 1973 finishers).

So much space between runners, so quiet, and on what I remember at the time was a new road lined almost entirely by vacant lots. There were also vacant lots in Hawaii Kai and on the highway. Hawaii Loa Ridge was just a ridge.

I believe in the Honolulu Marathon’s mission as a people’s race that accommodates itself to huge crowds of runners. It is superbly organized. And as its organizers had hoped, it makes people healthier by showing them how to get off their okoles and run. You can’t have lived here without knowing someone like that.

But it’s not for me. To enjoy running in these modern marathons, you need to savor crowds, groove on the noise, and appreciate being managed.

That’s not me. I don’t want to be part of a crowd. The hoopla, cheering, noise and camaraderie of being nose-to-tail with dozens of runners makes me uncomfortable.

More and more, crowds and their management have also become an inescapable part of living in Honolulu. That’s what happens when a small city, which Honolulu felt like back in 1973, becomes a big city.

Getting lost is a good thing. All by yourself in a quiet place. Finding your way in your own good time. 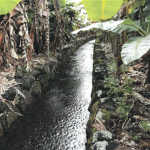 Great imagery of a long lost time when the marathon was a true athletic event, held not for the money, but for the sport and accomplishment.  Unfortunately, those humble beginnings have faded away and what isn't mentioned is that the today's event is not only bigger, but it's run for immense profits for the organizers and the tourism industry.  I doubt residents where ever inconvenienced in 1973, or in many years after, but today anyone near or along the route is trapped in their home for not just a few hours, but for the entirety of the day.  The reason for that stems again from profit.  Unlike, real races that have cut off times, Honolulu is an endless sea of walking and barely moving pedestrians that come simply for the T-shirt and to say they finished.  Nothing like doing 26 miles in 13 hours as a badge of honor, while preventing locals from parking at Diamond Head to surf.  It's long overdue for the city to put some time limits on the disruption and inconvenience, as the race does little for the average tax payer.  And for the thousands of us that live on the East side, we would welcome the old days.

Thank you for giving me a glimpse of what Honolulu was like years ago.  Sounds like heaven.  That's why they call it, "The Good "Ol Days!"

I love this essay. I was a tennis player and believed that marathons were all about The Loneliness of the Long Distance Runner. After switching my weekend warrior routines from tennis to distance running, I've completed 31 marathons, including 7 Honolulu Marathons with its outstanding sponsors, organizers, and volunteers. But my favorite ones have been those, while official, have just a few hundred entrants who root for you as you do for them. For a few hours, sometimes longer, you become friends. You finish and you still feel like you've just won an Olympic gold medal!