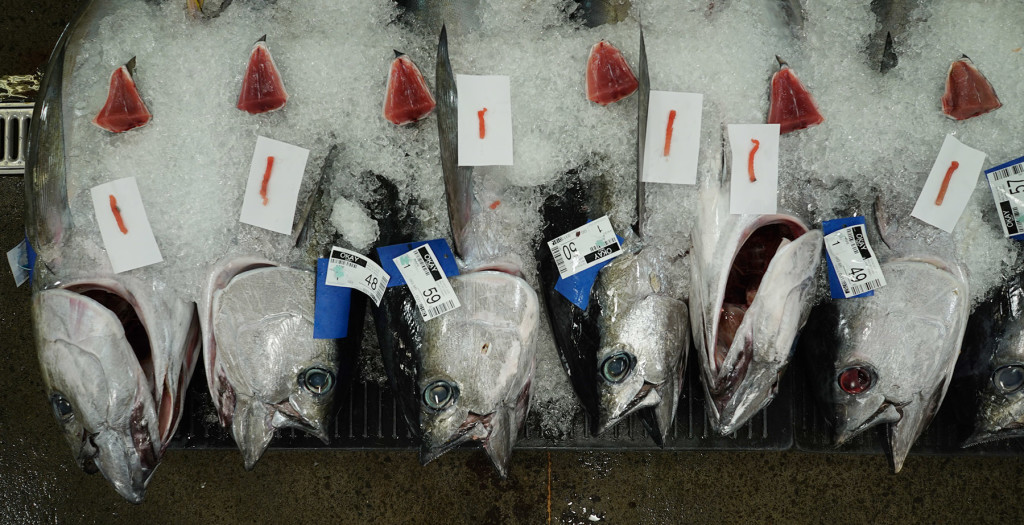 Warmer waters are shifting the size and behavior of ahi in the Pacific, which could affect prices for consumers. But it’s not all doom and gloom.

Hawaii’s beloved bigeye tuna will be smaller, less abundant and farther away for local fishermen to catch as the Pacific heats up with global warming, scientists project.

And that could mean more expensive poke bowls and sashimi plates if the supply of fresh ahi declines as expected.

The association represents about 145 longline vessels and almost all target tuna. They have made Honolulu a top port in the U.S. in terms of the value of fish landed — roughly $104 million in 2017. The Hawaii fleet catches about 80% of all the bigeye tuna landed in the U.S.

But as the planet warms as a result of greenhouse gas emissions, ocean temperatures are also rising. The changing climate is also affecting the water’s oxygen levels and acidification.

Tuna — and their prey — are especially particular when it comes to temperature. That’s part of the reason fishermen have gotten so good at catching them. They know how deep to set their hooks based on how cold the water is.

Tunas dive a few hundred meters deep or more to access ideal foraging waters with temperatures between 10 and 15 degrees Celsius. The bigeye are moving toward the poles and east in search of cooler waters as their historic feeding grounds closer to the tropics heat up and less food becomes available.

Phoebe Woodworth-Jefcoats, a research oceanographer with the U.S. Pacific Islands Fisheries Science Center, studied the impacts of climate change and fishing on bigeye tuna and the ecosystem that supports it.

In a peer-reviewed paper published this summer, she and her colleagues found “the decline in Hawaii’s longline fishery yield may be inevitable.”

For now, fishing is the biggest manmade stressor on the tunas and the ecosystem. But climate change will have a growing impact in the decades to come, the study says.

“It starts out as a small change and just gets worse over time,” Woodworth-Jefcoats said in an interview earlier this month. “We expect that climate change will lead to fewer and smaller bigeye tuna in the future.”

A suite of scientific studies, taken together, shows that “climate-driven declines in food availability may reduce fish body size and biomass, as well as future fishery yields,” her paper says.

It could also mean more costly tuna. If fishermen have to travel farther to find bigeye, she said, it can make each trip longer and more expensive. Or perhaps coming home with fewer fish since it’s so important to bring back a fresh product when it comes to bigeye.

But the study also found a reason for optimism if fishery managers take action.

Modeling showed two scenarios, both assuming a 1.5 degree C increase in global temperature. In the first, fishing effort remained the same and resulted in 25% less catch and a 20% reduction in biomass. In the second, fishing effort was slowly cut in half and the biomass increased 44% while the loss in catch remained about the same at 23%.

“Our decisions on how much to fish can have an impact on how the ecosystem responds to climate change,” Woodworth-Jefcoats said.

The modeling framework she and her colleagues developed offers a new tool for supporting strategic management decision-making in the Western and Central Pacific and other regions.

The 16-member Western Pacific Regional Fishery Management Council has jurisdiction over more than 1.5 million square miles of ocean. It makes the official recommendations to the National Oceanic and Atmospheric Administration on how much tuna the fishermen should be allowed to catch each year, subject to internationally agreed upon limits.

Over the past decade, NOAA has generally approved whatever Wespac proposed. That has meant maximizing the amount of bigeye that Hawaii’s longliners are allowed to catch, including creative schemes to double their quota.

“It’s important we use the time now to get the management right.” — Dave Gershman, The Ocean Foundation

In June, Wespac recommended increasing the catch limit again for tuna. If approved, the longliners would be allowed to catch 18 million pounds of bigeye.

That’s more than double the limit set by the Western and Central Pacific Fisheries Commission, which includes the U.S. and more than two dozen other countries and island nations.

Wespac and Hawaii’s longliners have gotten around the quota limits by making agreements with Guam, American Samoa and the Northern Marianas.

They attribute additional catch to one or more of the U.S. Pacific island territories in exchange for payments into a sustainable fisheries fund managed by Wespac. Each $250,000 agreement buys the right to fish for another 1,000 tons of ahi.

The new proposal, which would be effective through 2023, would increase the amount of quota that Hawaii’s longliners can allocate to each territory by 50%. So instead of 1,000 metric tons per territory, it would be 1,500 metric tons.

While noting her study just came out in July, Woodworth-Jefcoats said she has yet to see any direct management measures in response to her paper or other scientific reports showing how climate change may affect Pacific tunas.

Wespac spokeswoman Sylvia Spalding said in a statement that “climate change remains a notable priority” in the council’s five-year planning and research priorities in concert with NOAA.

The council works closely with the Western and Central Pacific Fisheries Commission in supporting research on the distributional changes of tuna fisheries projected under expected climate change scenarios, Spalding said.

French researcher Inna Senina last year published a study suggesting a distributional shift of skipjack tuna that could be either detrimental or fortuitous to some small island developing states and territories which can reduce or increase fishing opportunities.

The Northern Marianas would see an expected 48% increase in skipjack biomass within its exclusive economic zone by 2050, Spalding said, and American Samoa would expect a similar increase.

Scientists from the Pacific Islands Fisheries Science Center work with the council’s Pelagic Plan Team, which Woodworth-Jefcoats is a member of, to develop climate indicators that can impact pelagic fishery performance, such as bigeye tuna, Spalding said.

Ocean temperatures, and how they shift swordfish and tuna stocks, are closely monitored to make informed decisions on fishing effort and targeting, she said.

Kingma said the good news is Hawaii’s longline fleet has the ability to roam far distances in search of bigeye. And he sees value in using the fleet as a research platform since there are so many vessels out on the water targeting tuna.

This could boost the overall understanding of species distribution, said Kingma, who worked for Wespac before joining the longline association. He earned his doctorate last year, focusing on international fisheries law and policy.

“The scary thing about climate change is whether ocean productivity will decrease,” he said. “If productivity decreases, that’s a problem. Right now there’s a lot of speculation about that but not a very good understanding.”

The Pacific bigeye tuna were upgraded in the 2017 stock assessment to a status where they are considered sustainable and no longer being overfished.

Dave Gershman, who focuses on international fisheries at The Ocean Foundation, said it’s critically important to continue research on this issue.

He is encouraged by the commission’s decision to develop a longterm harvest strategy for tunas. He sees this system of rules designed to keep stocks healthy while improving their resilience to climate stressors as a critical move away from the short-sighted practice of negotiating catch rates each year.

The Ocean Foundation will be among the non-governmental organizations in Papua, New Guinea, this December advocating for such policy changes when the commission holds its next meeting.

“The science is beginning to show that climate change will have real impacts on these fisheries and these are incredibly valuable fisheries both to provide food for people and jobs and livelihoods,” he said. “So it’s important we use the time now to get the management right.”

Read more in Civil Beat’s ongoing series, “Hawai 2040,” that explores climate change in Hawaii. Tell us how you’re being affected by climate change and what you think can be done.