Fighting the effects of climate change comes with a price tag.

Hawaii lawmakers will be considering over the next few months how much of the state’s $34 billion biennium budget should be spent on a litany of issues facing the islands as a result of global warming. 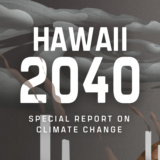 Rising sea levels are eroding prime money-making beaches, including Waikiki on Oahu and Kaanapali on Maui. Wildfires are costing more to control. And feral goats and pigs are threatening freshwater supplies, native habitats and the recovery of endangered species.

The state Department of Land and Natural Resources is asking the Legislature to approve millions of dollars to continue ongoing initiatives and beef up other areas related to climate change.

Director Suzanne Case presented her department’s case for additional funding Thursday before the House Finance Committee, chaired by Rep. Sylvia Luke, though she dipped out after opening the meeting and let Vice Chair Ty Cullen run the show.

Lawmakers will be balancing these funding requests against a laundry list of other pressing needs facing the state, such as homelessness and public education. But land officials highlighted how many impacts of climate change affect all of the state’s 1.4 million residents and the soaring number of visitors.

DLNR already receives less than 1 percent of the state’s overall budget. For fiscal year 2020, which starts July 1, the department’s total budget request is $171.3 million, which is about a 7.6 percent increase and includes about 1,000 positions. For FY 2021, DLNR is seeking $168.8 million, about 6 percent more than this year.

And that’s only what Gov. David Ige agreed to include in his budget that he submitted in December to the Legislature. DLNR asked for much more, but its requests were whittled down to balance the overall spending plan.

The 20-member commission, which the Legislature created in 2017, has started to gain traction. It completed a monumental sea level rise report that shows how more than $20 billion in coastal buildings and roads are threatened by rising seas and increased flooding in the coming years. Now, the commission is looking at how it can put that science into management decisions.

And on Monday, the commission held the inaugural Hawaii Climate Conference, an all-day event at the East-West Center featuring expert panels and speakers.

The department is asking for $65,000 to $75,000 annually to make the climate coordinator position permanent and another $110,000 for planning and administration costs for the commission.

Sam Lemmo, who heads DLNR’s Office of Conservation and Coastal Lands that oversees the commission’s work, said the work that’s being done would be “severely impacted” if lawmakers don’t approve the funding.

He said it’s possible the effort would be picked up by some other entity if money isn’t appropriated, but it’s unclear who would take it up.

The House has the first stab at the overall budget, which it’s expected to draft by March and then send over to the Senate. The final differences will be negotiated in April before the legislative session wraps up May 4.

DLNR is also asking for $5.6 million in fiscal 2020 and $5 million in 2021 for watershed protection statewide.

“Immediate action is needed to secure Hawaii’s water supply,” DLNR says in its budget request. “Hotter, drier conditions and damaged watersheds are escalating the costs and conflicts over water.”

The money largely goes toward fencing that keeps hooved animals — goats, pigs, deer — out of forests and other areas important to Hawaii’s freshwater supply. The animals eat native vegetation and root around, loosening soil and increasing erosion.

Some lawmakers expressed concern over DLNR doing aerial eradication — shooting goats from helicopters — in some areas, particularly the west side of Oahu.

Rep. Cedric Gates, whose district includes Waianae, said some of his constituents had complained and that it had become quite a controversy.

Brian Nielsen, of the Division of Aquatic Resources, said the department has heard those concerns and worked to increase hunting seasons for residents and stopped shooting in certain areas.

But he said the environmental threat posed by thousands of goats remains serious and some aerial shooting will continue in remote areas that are hard to access otherwise.

“We’re seeing unprecedented amounts of erosion out there,” he said.

Gates was also worried about wildfires on the west side.

DLNR has asked for $300,000 for fire and emergency response because the cost of controlling wildland fires is trending upward with climate change. The Division of Forestry and Wildlife is responsible for 1 million acres of forested watershed (25 percent of the land in Hawaii) and works with the feds and counties for another 30 percent.

Rep. Nadine Nakamura, whose district includes the north and east side of Kauai, asked Case what’s being done about the rise of rapid ohia death, a fungal disease that has destroyed native forests on the Big Island and recently spread to the Garden Isle.

Some effects of climate change, such as stronger storms and more hurricanes, make it easier for such diseases to spread.

The governor’s budget included $500,000 to help DLNR respond to rapid ohia death. The department had wanted another $1.25 million for research and outreach about rapid ohia death but Ige did not include it in his request.

The restoration of beaches, a fundamental part of life in Hawaii and crucial to the visitor-based economy, was a big-ticket item in DLNR’s proposed budget.

Ige wants to add $10.4 million in fiscal 2021, including $3 million in private contributions, for the Waikiki Beach Master Plan improvements.

The Office of Conservation and Coastal Lands has completed a draft environmental assessment to replace the Royal Hawaiian groin at Waikiki Beach, and used hotel tax revenues to initiate a major project to conduct beach improvements at Waikiki Beach.

Case and her division heads will be making a similar budget pitch Friday morning before the Senate Ways and Means Committee, headed by Sen. Donovan Dela Cruz.

See the full presentation below.

How A Powerful Lawmaker Forced Through A Contentious Energy Bill

Catherine Toth Fox: We Have To Find A Way To Keep Our Kids Safe At School

More Hawaii Schools Are Using Dogs To Sniff Out Covid

The Coronavirus Pandemic Caused An Uptick In Eating Disorders