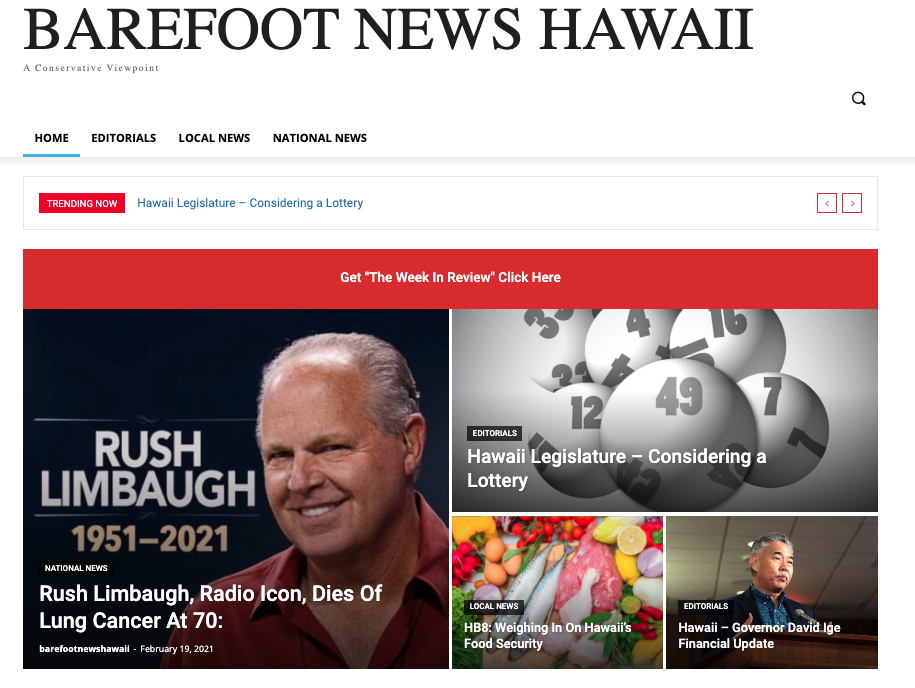 An obituary for Rush Limbaugh posted Friday makes clear how admiringly its subject was viewed.

“Reaching an audience of more than 15 million listeners, Rush used his platform for years to dig into political correctness, foretell the rise of Donald Trump, and lead listeners around the nation through conversations regarding Republican issues,” it reads. “Limbaugh took the honor of badge (sic) in being a truth detector, doctor of democracy, and lover of mankind.”

Nope. It’s from Barefoot News Hawaii, an online newspaper/blog run out of a Kapolei office.

The content of Barefoot News, which was launched Oct. 12, is proudly conservative. Recent headlines include Liberals Are Banning Books Now, Proof of Hunter Biden Scandal Censored By Mainstream Media and Reopening Schools – A Democratic Political Weapon.

But there are locally focused articles, too, including HB8: Weighing In On Hawaii’s Food Security, which looks at House Bill 8 before the Legislature calling for setting up a Hawaii Food Security Initiative Program within the state Department of Agriculture.

There is also this story, The Hawaii Affordable Housing Problem. That article includes this observation: “The political party that manages to solve the affordable housing problem without burdening the state with more costs and without angering voters is going to govern Hawaii.”

Translation: It isn’t the Democratic Party, which has controlled Hawaii governance and politics for the better part of 60 years.

Barefoot News Hawaii is run by Dennis Kennedy, owner of Kama’aina One Source, a property manager services company that helps with cleaning, repairs and other general handyman work.

“I’ve been a conservative most of my life,” he told me earlier this month. “I am not way out to the right — probably more right of center. I am not an extremist. I very much consider myself to be a fiscal conservative and an individual who likes to see results.”

Not Pay To Play

In a column in October I wrote about six new pay-to-play journalism websites with Hawaii-themed names. I learned about them from a New York Times article that said there are 1,300 such sites across the country created by Republican groups and corporate P.R. firms seeking to “fill a void” in a media landscape such groups feel is dominated by liberals.

Kennedy, 65, is trying to fill a void here in Hawaii, one of the bluest states anywhere. But he is not affiliated with the conservative groups Metric Media and the Business Daily network, and the NYT’s piece makes no mention of Barefoot News. Indeed, Kennedy is the registered agent for Barefoot with the state Department of Commerce and Consumer Affairs.

But he also believes there is a serious lack of conservative voices in the islands, and that’s why he started his site.

“Don’t think I am crazy,” he said. “I am just trying to provide some information out there, trying to find conservatives to write articles and giving them a forum for that.”

Kennedy said he was inspired to do so during the Trump administration years, saying, “I saw a gap in people being able to express opinions or write articles. I decided I wanted to see a more conservative viewpoint.”

Kennedy, originally from Ohio, has lived in Hawaii for more than 15 years. He’d like to make a little money from Barefoot through advertising, but for now it’s been largely a labor of love. “It’s cost a bit of money,” he acknowledges.

One struggle is finding people to work for him who live in Hawaii, preferably on Oahu. While Kennedy will use the byline D. Kennedy for his own articles, others use obvious aliases like T. Jeffersonian.

“Some of them are in critical government positions and have to be careful about their viewpoints,” he explains about the anonymous contributors.

The articles are typically between 400 and 500 words, and Kennedy has an editor review them, add photos and links and develop keywords for SEO — search engine optimization — before publishing.

As you might have guessed, Dennis Kennedy is a Trump supporter, calling him the second-best president after Ronald Reagan and followed by John F. Kennedy.

“Whether you like him or not, he did everything he said he would do,” he says about Trump, adding that he does not believe Joe Biden was elected “fair and square.”

But he accepts that Biden is president, noting that many Democrats never accepted Trump.

What does he think of the Jan. 6 storming of the U.S. Capitol?

“I believe that it was preplanned and I believe some of those people that were there were not Trump supporters,” he said, noting that Trump’s speech that day did not explicitly call for violence.

What about the impeachments?

“A waste of taxpayer money. He was never going to be convicted.”

In addition to sharing more conservative viewpoints, Kennedy is also interested in helping Republicans in Hawaii.

“The first thing the local Republican Party needs to do is respond to their base,” he wrote on Barefoot Feb. 2. “I am willing to bet if I contacted Hawaii’s Democratic Party, I would get a response. Why would they respond? Because they are well more organized than our party. This is not only true here in Hawaii but across the nation.”

Another recent article, How to Turn Hawaii into a Red Republican State from the mysterious T. Jeffersonian, suggests the GOP use the old Reagan line to attract support: “Are you better off than you were four years ago” in order to recruit supporters.

Reached by phone Friday, Kennedy told me he recently had a nice talk with Boyd Ready, the interim party chair.

“I know there is turmoil there,” he said, referring to the abrupt departure of former chair Shirlene Ostrov. “But I am trying to find out more of what’s going on and see if I can help.” 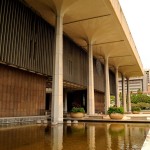 A Possible Fix For The Capitol’s Stinking Pools

Barefoot News is writing for about a dozen people in Hawaii.  The silver lining is that adding just one reader will increase the percentage of readers a lot.

I have moved away from the Democratic Party movement because they have become an authoritarian party of suppression of free speech unless they agree with you and blacklist those that have a conservative point of view.  People have lost their jobs because they not presented the "correct" point of view. Didn't we go through this in the 1950s?  We're headed in a very dangerous direction.

I don't recall Mexico paying for the wallDid I miss the Great, Cheaper, Better Health care plan (promised on day one)Bring manufacturing (jobs) back, we actually lost moreRebuild the country's aging infrastructure: never happened.Make America great again: His total incompetence in dealing with the pandemic has left 500,000 Americans dead, and economy in the dumps.Actually tied for worst, with Bush.Yea and Trump was so good for the deficit.