The former Hawaii congresswoman has faded from public view in the islands. But she's making waves again nationally. 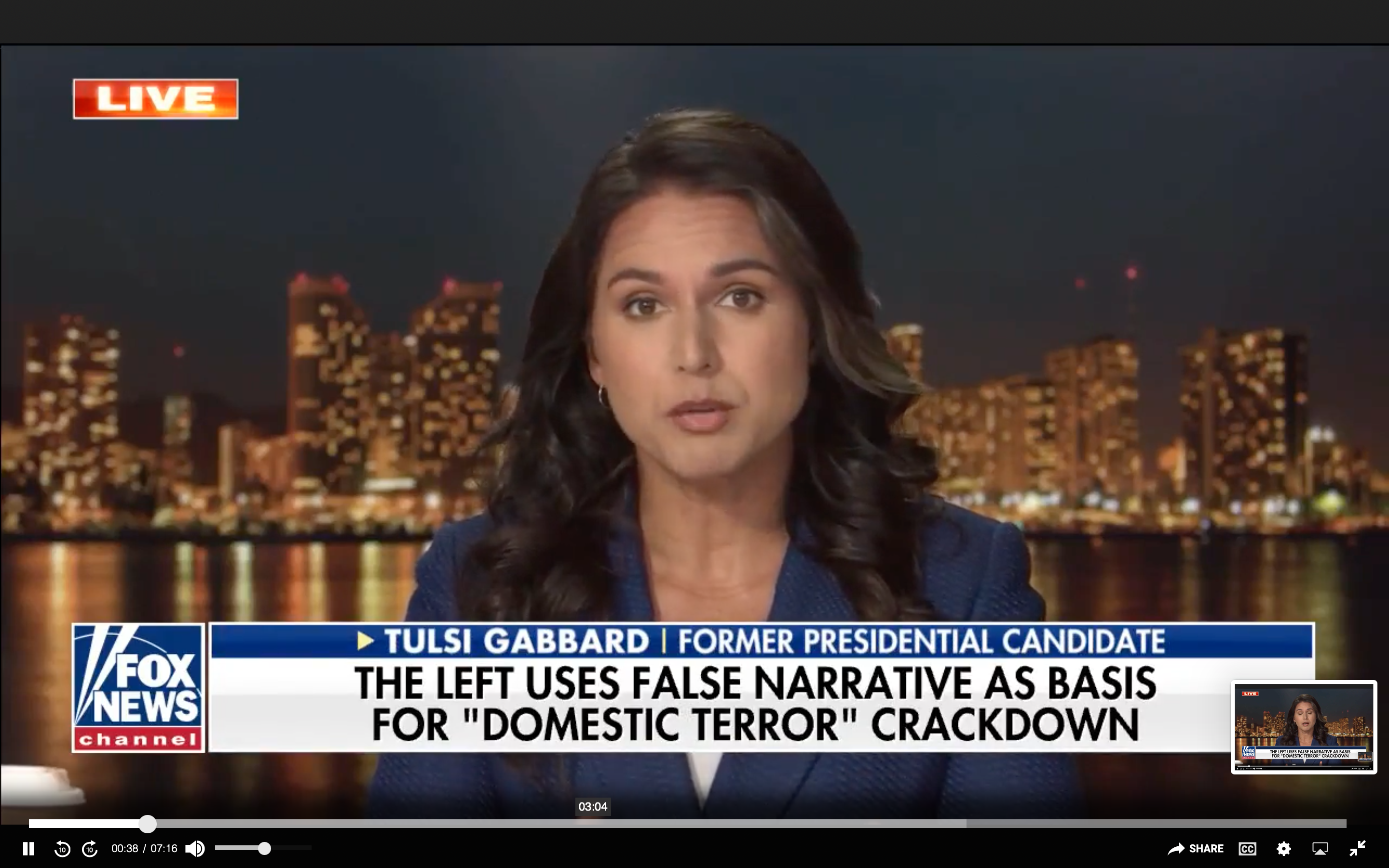 Serving in the U.S. House of Representatives is often a stepping stone to higher office.

Ed Case and Colleen Hanabusa stumbled in their attempts to advance politically, but each later returned to the House. Case is running for reelection again in 2022 and Hanabusa is again serving on the Honolulu rail board.

Six months after leaving her fourth term in the House and more than a year after her quixotic run for the U.S. presidency, Gabbard attacked the mayor of Chicago.

“Mayor Lightfoot’s blatant anti-white racism is abhorrent. I call upon President Biden, Kamala Harris, and other leaders of our county — of all races — to join me in calling for Mayor Lightfoot’s resignation,” Gabbard tweeted two weeks ago. “Our leaders must condemn all racism, including anti-white.”

Gabbard was reacting to Mayor Lori Lightfoot’s decision to limit for one day media interviews to journalists of color. Her remarks were criticized by some who said there is no such thing as “white culture” but embraced by the likes of Rep. Lauren Boebert (R-Colo.), best known for promising to carry a firearm into the U.S. Capitol.

The rationale of the mayor, who is Black and gay, was to emphasize the “overwhelming whiteness and maleness” of the Chicago media. The rationale of Gabbard, I presume, is to keep her name in the headlines and to curry favor with conservatives.

“Tulsi Gabbard takes a stand against woke liberal racism” ran a headline in the Washington Examiner.

She also managed to again upset groups that have never warmed to her. A writer for LGBTQ Nation noted that during her 2020 presidential bid Gabbard faced “strong criticism for her past work as a conservative activist including working for an anti-LGBTQ organization.”

The article also pointed out that Gabbard introduced a bill during her last two months in office trying to ban trans girls and women from participating in sports, “knowing it would not be considered at the end of Congress’s session.”

In addition to making news, Gabbard’s latest stance lit up the Twitterverse, too, much of it favorably.

“2024 election about to be Liz Cheney (D) vs Tulsi Gabbard (R),” tweeted Ohio Comrade. Cheney was ousted from her position as chair of the House Republican Conference last month due to her criticism of former President Donald Trump.

Not all of the tweets were flattering: “‘My Two Dads’ by Tulsi Gabbard, a children’s book based on the most important men in her life: Vladimir Putin and Bashar al-Assad,” wrote The Cascadian Pragmatist.

By the end of the month, Gabbard, a military veteran, was tweeting her support for the fallen on Memorial Day — and making more pointed commentary.

“Let us reject the self-serving warmongers & media propagandists who are now preparing the American ppl for more wars — from Asia/Pacific to Eastern Europe/Russia.”

Those remarks were reported by the far-right Breitbart.

Democrat In Name Only?

If Gabbard’s political obituary were written today it would likely lead with her 2020 run. She definitely made history, promoting herself as the “first female combat veteran to ever run for president.”

She was a unique candidate in others ways, too. According to tulsigabbard.com, she is of mixed ancestry — Southeast Asian (25.6%) French and German (24.6%) “and Polynesian descent, as well as a mixture of 9 other ethnicities” — and was raised “in a multi-faith family studying both the Christian and Hindu scripture.”

But where does Gabbard go from there, other than maybe hosting her own show on Fox News?

There was much speculation that she ran for president in order to get a job in the administration — Trump’s or Biden’s. That seems like a stretch given that she is a Democrat (or maybe a DINO) who has heavily and repeatedly criticized her own party, especially Hillary Clinton but also Barack Obama.

Others wondered whether she was some sort of Manchurian candidate running at the behest of a mentor or ideologue.

As a candidate she traveled extensively for her campaign, causing her to miss a lot of votes in Congress. And yet she won only two delegates, both from American Samoa.

Late last year Civil Beat reported that Gabbard was to become a major in the U.S. Army Reserve at a command post in Silicon Valley. We also reported in January that Gabbard was launching a podcast that will “go beyond the media soundbytes to share in-depth insights & thought-provoking conversations,” as she said on Twitter.

I could not reach Gabbard for comment to ask her about her plans. But my take on her appearances in the media and on social media over the past six months show her to still be focused on national and international events but not so much on Hawaii.

(One notable exception: She tweeted last month that the Red Hill fuel tanks should be removed lest Oahu water aquifers be polluted.)

She is also expressing worry about divisions in the country but seems to blame Democrats more than Republicans. And she continues to embrace a spiritual ethos.

Here’s a sampling of news clips featuring Gabbard, many from Fox News:

During her last month in office, Gabbard was one of only two House Democrats to vote against a massive federal COVID-19 relief bill. She argued that “$600 is a slap in the face to every American struggling due to the pandemic.”

It’s not surprising that the Senate approved Blinken as Sec of State. After all, he is a warmonger as are most senators in both parties.

She told Tucker Carlson that the House’s recent ban on gendered language denies “the very biological existence of women.”

Condemning the Jan. 6 Capitol riots on social media, she said that Rep. Adam Schiff, D-Calif., and former CIA Director John Brennan should be considered “domestic enemies” of the U.S. for “undermining our constitution by trying to take away our civil liberties and rights that are guaranteed to us.” Gabbard initially called them “domestic terrorists” but later said she misspoke.

She told Laura Ingraham that Nancy Pelosi, in wanting to spend more money on Capitol security to protect against the “enemy within the House,” was effectively throwing a “match into a tinderbox” while the nation remains on edge.

Speaking to Trey Gowdy, she compared cancel culture to extremist groups like Isis and Al Qaeda “who basically go and behead those who they deem to be infidels or heretics in order to silence them.”

The personal attacks against Senator Tim Scott were despicable. We need to discuss and debate issues fairly and with respect. This is the spirit of aloha.

In another Facebook post, Gabbard wrote, “My dear friends and fellow Americans, please, please let us stop the RACIALIZATION of everyone and everything — i.e., racialism. We are all children of God and are therefore family in the truest sense, no matter what our race or ethnicity. This is aloha. This is what our country and world need.”

Gabbard told Megyn Kelly that, while there are “well-intentioned members” from both parties in Congress who want to work together, partisan interests corrupt genuine intent. “If you do this, you’re not going to get the committee you want or you’ll get yanked off the committee that you’re on,” she said. “If we’re being serious it’s like high school.”

Gabbard warned Mark Steyn about a new federal surveillance campaign focused on white supremacists, racists and domestic extremists, adding that “none of these terms are clearly defined or really defined at all.” She continued:

“If you look at the term white supremacist, this is something that many agree, it’s the philosophy of the KKK and Nazis — people who believe the White race is superior, and therefore must have power and control over all other races.

In the meantime, she continues to inspire speculation about her political future. In addition to talk that she might switch parties and run in 2024 should Trump decide not to seek reelection, Texas News Today reported that a poll from the far-right One America News found that more than 60% of people want her to replace Gavin Newsom as governor of California.

I don’t hear much about Gabbard seeking office in Hawaii again, as Patsy Mink successfully did after leaving the House for the first time in 1977. Gabbard has burned a lot of bridges.

But she’s only 40 years old, she’s not afraid to speak her mind, she’s unpredictable and I suspect she still has political ambitions. She’s also pretty good on TV, where I expect we will continue to see her for some time to come.

And 2022 is a big election year. Could Gabbard defy expectations once again and maybe run for, say, lieutenant governor?

In addition to her eight years in Congress she also served on the Honolulu City Council and in the Hawaii Legislature. In a crowded primary where Republicans and independents are allowed to vote for Democrats, Gabbard could appeal to a lot of voters. 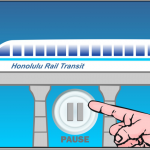 Tulsi Gabbard/Rand Paul '24. The establishment parties don't care about you. Then send you little tiny checks while spending billions on their special interests, friends and family. While you get lousy healthcare and retirement, they give themselves the best. While your schools fail, bridges crumble, they spend trillions in Endless Wars.

It's all about the "science" of identity and hence it is profoundly confusing.

Where Tulsi Gabbard shows her true colors is how she does not respond to communication from her constituents.  The one positive to me was when she cut through the missile attack message.  I thanked her, but received no reply.  Likewise when I communicated with her for trashing Hillary Clinton via opinions and not facts.  Again, no reply from my communication, despite indicating where I live, my telephone number, and my email address.  And her presidential campaign: hiding out in New Hampshire in her $129,000 "Tulsimobile."  Avoid her.