Chad Blair: Honolulu Was Already Transformed By Tourism In 1969

National Geographic's profile of Hawaii's capital city 10 years after statehood was a preview of things to come. 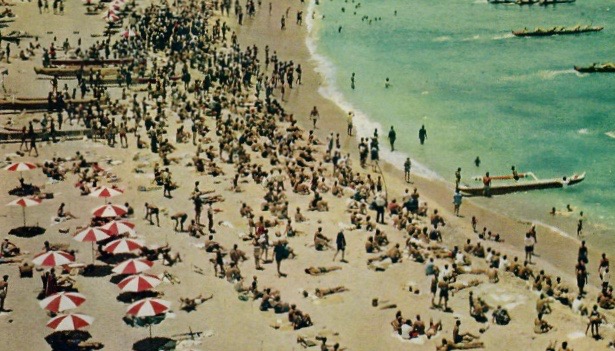 The year 1969 saw man walk on the moon, more than 350,000 hippies gather at Woodstock, the Stonewall riot in New York City, the Manson murders in Los Angeles, the Chappaquiddick affair of Ted Kennedy, the trial of the Chicago Seven, the debut of “Sesame Street,” the release of “Easy Rider” and the inauguration of Richard Nixon.

Busy year, eh? And that’s just in the United States.

It was also the year that National Geographic published a 32-page article that October titled “Look what happened to Honolulu!” It was written by Hawaii journalist Jim Becker with illustrations from the magazine’s photographer Bates Littlehales.

The article focused on how, just 10 years after statehood and with the arrival of the jet airliner, Hawaii’s capital had transformed from “a picturesque Pacific crossroads to something approaching an outpost of Southern California.”

“A tourist searching a postcard rack for a typical Honolulu scene might as accurately select one showing cranes flinging up new buildings as one of palms swaying in the balmy breeze. And he might hear the wham! of pile drivers as frequently as happy rhythms strummed on ukuleles.”

Becker described Honolulu as a boomtown whose 3% annual population growth was more than double the national average. New construction was valued at $415 million. And more than 1.2 million visitors in 1968 made tourism the second largest “enterprise,” trailing only federal money going to large military installations.

Mike McCartney, the director of the state Department of Business, Economic Development and Tourism, told me about the 1969 article after reading my recent column (“A 30-Year-Old Rant On Hawaii Tourism Still Rings True”) on Haunani-Kay Trask’s 1991 essay lamenting the tourism industry’s desecration of Hawaii and Native Hawaiians.

“I found it in my mother-in-law’s trash one day back in 2011,” said McCartney, who at the time led the Hawaii Tourism Authority. “I put it up on the walls of the HTA office as a reference where we could all see it as a reminder to keep the balance.”

Keeping the balance is top of mind these days as Hawaii experiences a faster return to full tourism than expected after 16 months of COVID-19. The Hawaii Legislature gutted the HTA’s budget even as the agency is embarking on efforts to better manage the damaged brand.

Like Trask’s 30-year-old scholarly analysis, reviewing the ’69 National Geographic piece more than 50 years after its publication is helpful in understanding just how much tourism has changed Honolulu and Hawaii. It also illustrates how iconic imagery continues to define perceptions of our island state but also can distort the reality of what it is actually like to live and work here.

The article features gorgeous photos of the Ilikai, Royal Hawaiian and Hilton Hawaiian hotels, hula dancers, Diamond Head, the Arizona Memorial, flags and flowers at Punchbowl cemetery, the making of lei, Don Ho and — of course — surfing at Sunset Beach. It’s like the opening credits to the original “Hawaii Five-0” series without the soundtrack.

But there are also insightful interviews with local luminaries of the day such as Chinn Ho, Neal Blaisdell and Tom Gill. Especially sweet are revealing, intimate surprises like photos of a Shinto blessing for a newborn, two children in a family furo and a Colorado woman at Fort DeRussy (spelled “Fort De Russey”) anxiously awaiting the arrival of her Army captain husband from Vietnam (or “South Viet Nam,” as the article called it).

In that last series of photos, the wife flies into her uniformed husband’s arms, “tossing a lei that just misses being a ringer,” the caption reads. “Their poignant reunion is but one among many; each month 10,000 battle-weary men arrive for ‘R and R’ in Honolulu.”

It’s a reminder that, whatever image Americans may have of Hawaii, the Pearl Harbor attack remains central to our modern history, as does the large military presence on Oahu.

Other details underscore just how much has changed — and how little:

I agree with McCartney’s view that the 1969 portrait of Honolulu is “perhaps more relevant today than back then.” His hope — and mine — is that we have “a safe and respectful civic space” so everyone can contribute to discussing what’s best for the islands.

It was not the first time Hawaii had been depicted in National Geographic, of course. It’s also illuminating to compare the 1969 profile with one published in July 1960, barely a year after statehood. “Hawaii, U.S.A.” was by Hawaii journalist Frederick Simpich Jr. with illustrations by photographer Thomas Nebbia.

The 1960 article is more of a loving introduction to Hawaii for an audience that probably knew very little about the 50th state. You will learn what mauka and makai mean, for example. And it includes good interviews with local luminaries like Herb Cornuelle, Hung Wo Ching and Bill Quinn.

Both articles highlight the burgeoning tourism industry and Hawaii’s military history. Other comparisons are sometimes striking and show how rapidly things can change:

But what is also striking is a photo taken at a University of Hawaii graduation ceremony showing an ethnically diverse population. Contrast that with the advertisement for flights to Hawaii on Pan Am that features a white couple bedecked in lei and leisurely paddling an outrigger.

My primary takeaway from both articles is how quickly Hawaii shifted from an agricultural breadbasket to an import-dependent state reliant on tourism. For today’s policymakers, the challenge of diversifying the economy, supporting its residents and mitigating the negative impact of 10 million-plus visitors a year is immense.

What will National Geographic have to say in 2030? 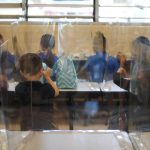 Decades ago, there was an intentional shift away from agriculture to tourism because of the realization that Hawaii could not be competitive for long with sugar and pineapple production in other tropical countries because of their low labor costs.  Tourism was an obvious alternative.  However, as tropical tourism has grown worldwide, Hawaii now realizes the difficulty in competing against destinations in undeveloped countries, such as Thailand and Mexico, because they also have low labor costs.  That's one reason employees in Hawaii's tourism industry suffer from low wages.  It's time for Hawaii to transition again -- to an economy based on high tech because of its high productivity and associated high wages.  However, that's more easily said than done because it requires an upgrade in the labor force, which means an upgrade in public education.  Hawaii has been trying to improve its public school system for decades, but without any meaningful results.

Mahalo for the stroll down memory lane Chad. I left Hawaii in'68 to take long walks in the forest in I in a now very beautiful country for a couple of years. Then traveled through the south pacific, settling in Samoa for several months trying to clear my head(good therapy). I contracted hepatitis and had to come home. What a culture shock! I landed a few jobs driving tour buses, working night clubs etc. "The good old days". Waikiki will look like Venice in the not so distant future. Which hotel will tumble into the ocean first or just give out and collapse in place?

ckn's comment below about everything being relative is spot on. Even if one had a time machine, there is no idyllic golden age to transport back to....w/o encountering unpleasant, even terrible, conditions unique to that time. Do we really want to go back to more than 50 years ago when some elite schools & organizations were, essentially, closed off to certain people for no other reason than their ethnicity? Going back further, does anyone want to live in a society that forbade women from eating pork & bananas? My point is, you have to take the good w/the bad, when it comes to assessing how we have it now, compared to prior generations. Focusing only on the positives & ignoring the negatives is looking at the past through rose colored glasses.Even if one could turn back the clock on our economy, you'll always have unhappy campers. For example, people on Maui today complain about feeling overwhelmed by the return of tourism. But others on the same isle complain about smoke from sugar cane burned by HC&S. It doesn't matter what drives our economy: there will always be the squeaky wheels who feel negatively impacted by any wide-scale business activity.