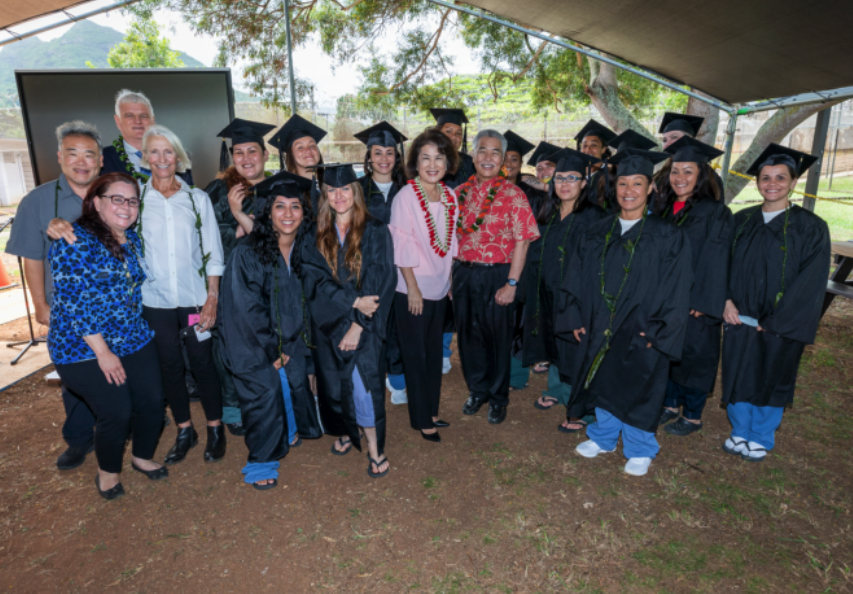 Lorenn Walker designs, implements, and studies public health approaches, including restorative justice and solution-focused methodologies to prevent crime and social injustice. Her work has been replicated in other states and countries. She directs Hawaii Friends of Restorative Justice and teaches for the University of Hawaii at Manoa. She is a Senior Fulbright Specialist for peacemaking and conflict management, and has been interviewed by CNN, NPR and OWN.

“Keep on going, the sky is the limit … education gives you the tools to make a difference,” Chief Justice Mark Recktenwald encourages the 15 women he’s just handed GED completion certificates. Gov. David Ige and First Lady Dawn Amano-Ige along with Rep. Linda Ichiyama are also in attendance congratulating the women on this bright and sunny April 7.

The event is notable because the graduates are imprisoned at the Women’s Community Correctional Center, where the ceremony was held. Many of the women had tested between the fourth and sixth grade before they’d begun studying for the GED, and at most they studied only five months before passing the test. The women’s success is also remarkable because WCCC’s average rate of GED passage is only three women a year.

The 15 women GED graduates participated in the Higher and Continuing Education pilot project funded by a GEER grant with federal government support for states to find relief from losing education skills due to Covid-19. Gov. Ige used the grants to support innovative ways to address the lack of education caused by the pandemic. The imprisoned women had no education for months after Covid hit. Gov. Ige had the foresight to include non-profit organizations as eligible grant applicants.

Hawaii Friends of Restorative Justice developed the program’s methodology in collaboration with community partners: WCCC, Windward Community College, which provides courses at WCCC pursuant to another federal grant, McKinley Community School for Adults that provides continuing education services for state prisons, and the College of Social Sciences at the University of Hawaii, which is affiliated with HFRJ.

HFRJ has a long history of developing, providing, studying and disseminating the results of pilot projects to generate evidence-based knowledge for improving systems (mainly the justice system) as well as the lives of individuals affected by them. Over 40 academic publications describe HFRJ’s work over the past 20 years.

This education program uses cooperative learning strategies and incentives to encourage imprisoned women to undertake academic studies. It has four parts, including training to select women as GED tutors for their less educated peers. It provides financial incentives for passing the GED and tutoring.

Most incarcerated people suffer from poor academic performance as children. My own struggle with education in my youth, but finding success as an adult, assists me in understanding what is needed for people who failed as children to achieve academically as adults.

My educational experiences include learning to read at age 10, dropping out of high school at age 15, and enrolling in a Montessori teacher training program at 18 and working as a Montessori pre-school teacher from ages 20 to 23.

Montessori teacher training taught me much of what I missed as a child. It is a cooperative learning approach and uses tutors. Cooperative learning leads to better outcomes. Later, I attended Kauai and Leeward Community Colleges before graduating from UH Manoa, and going to law school in Boston, all within seven years. Later I earned a master’s degree in public health from UH.

It can seem impossible to sit and study academic material without prior successful learning experiences. Creating successful academic experiences for the first time as an adult can be painstaking. Feelings of inadequacies from past school failures require encouragement, support, determination and persistence to overcome.

Harold Hall was a therapist I saw in Lihue after I’d almost been murdered in an attempted rape. He encouraged me to enroll at KCC full time. I was a 24 year old single parent. While I had successfully taught Montessori pre-school, I was a “high school drop-out” and believed I was not “college material.” I balked about going to KCC, but Harold kept insisting.

Finally, I decided to enroll, thinking I would drop out after demonstrating I could not attend school full-time, work 30 hours a week and raise a child single-handedly. I planned to quit college and was surprised after one week that I loved it!

My second year at Leeward Community College was harder. I wanted to maintain high grades and grants partly depended on that. This time it was a supportive boyfriend, and now husband, who helped me succeed. “Just stay in your chair until you get it,” he counseled me, as he explained basic things that I’d missed learning as a child.

Many times, during that second year at Leeward, I grew terribly impatient and in frustration threw my work on the floor. It took persistence and determination, but I succeeded. Encouragement and financial incentives were vital for me and many adult learners to persist with school. It can take enormous effort to keep those without a history of academic success at their desks struggling to learn academic material.

Most incarcerated people suffer from poor academic performance as children.

The second part of this prison-based program works to keep Windward Community College at WCCC. WCC’s education program at WCCC needs to be sustainable. The federal grant funding WCC’s prison program ends this year. WCC’s program encourages the women and helps them learn how education is beneficial.

As one woman said: “The program made me more passionate about education. I also learned a lot about myself. It also gave me a better outlook — a clearer vision of where I’m heading. Before I didn’t know where I was heading, but now I know where I’m headed.” Her goal now is a degree in social work or psychology.

The program also provides correspondence courses to imprisoned women (they are forbidden to take regular online college courses for “security” reasons). Not all women can take WCC’s courses because they are working, and some have taken them all. Correspondence courses can help incarcerated people stay on a path towards earning a degree.

Finally, the program serves imprisoned women by giving them the means to design their own unique reentry plan from prison to school after release. Huikahi reentry planning circles give individuals an opportunity to make amends with loved ones for harmful past behavior. The process also helps them make plans for where they will live, work, and all their other needs for successfully living in the community. Reentry planning is key to success in staying out of the legal system after release.

A second cohort of GED tutors was also honored at the April 7 graduation, along with women who completed other education programs. Four of the five new tutors just earned their GEDs and were part of the 15 women being honored. All five are enrolled in college now.

The women’s educational success benefits our community in many ways including preventing repeat crime after incarceration. Recidivism is reduced by 43% for people educated in prison. Education also increases personal agency, and the belief that one has some control in their life.

Women in domestic violence relationships often lack a sense of personal agency. Education could help prevent DV because it is often associated with a lack of education.

As one woman who earned both her GED and tutor certificate said, the most useful part of the program was being part of something where “everyone helps everyone.” That cooperative mindset is what we want for our community members.

First Lady Dawn Amano-Ige, who shared her pride with the 15 women on April 7, was right when she told them, “Education is a key to success (and this education program provides an) innovative structure that can be a model for education in other correctional facilities and make a difference in even more lives.” 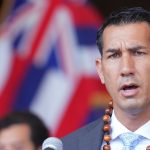 Danny De Gracia: Why We Need A Member Of Congress Who Will Stay Put

Lorenn Walker designs, implements, and studies public health approaches, including restorative justice and solution-focused methodologies to prevent crime and social injustice. Her work has been replicated in other states and countries. She directs Hawaii Friends of Restorative Justice and teaches for the University of Hawaii at Manoa. She is a Senior Fulbright Specialist for peacemaking and conflict management, and has been interviewed by CNN, NPR and OWN.

Reading between the lines it seems that the learning experience was either one on one or in very small groups. I believe that was primary to their success. There are many, because of present or past experience who require this to be motivated to learn.I wonder if our public schools had smaller classes with opportunity for individual tutoring, as in this program, if the outcomes in our schools wouldn't be greatly improved.