Chad Blair: Why Is It So Hard To Name Something After Obama In Hawaii? - Honolulu Civil Beat

Chad Blair: Why Is It So Hard To Name Something After Obama In Hawaii?

Obama is the only U.S. president born in the islands and has many ties to the 50th state. 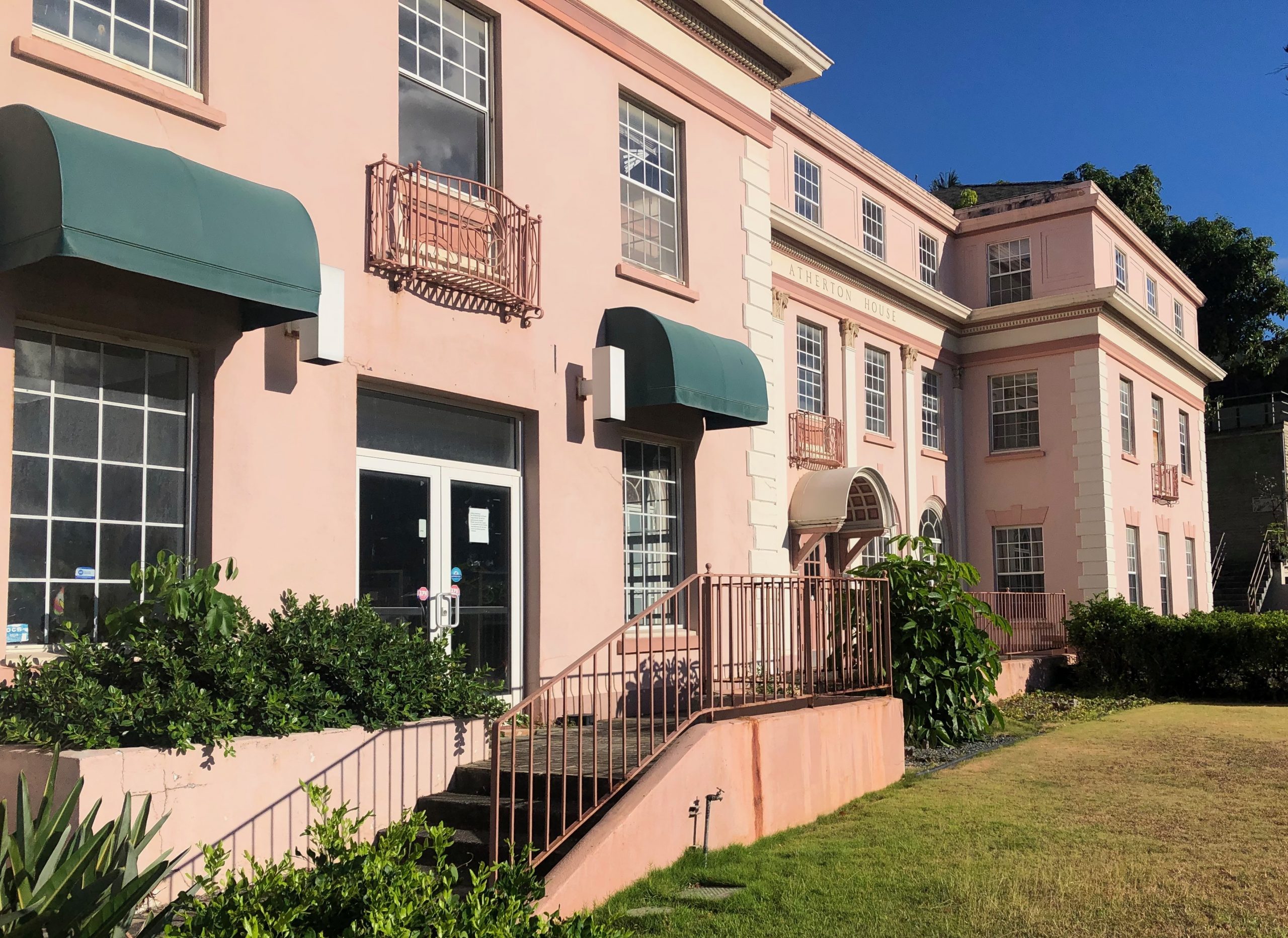 Was Barack Obama conceived in a YMCA in Honolulu?

A University of Hawaii Manoa administrator and scholar says the father of the 44th U.S. president, Barack Obama Sr., was among the original dormitory residents of the Charles Atherton House, as it is officially called, on University Avenue.

“In case you do the math, there’s a good chance that Barack Obama was conceived in this building,” William Chapman, the interim dean of the UH Manoa School of Architecture, emailed me last week.

Chapman, who is also an American Studies professor, gently cautioned, “My input should be informational not avocational. You should be able to find plenty of other folks to express their opposition.”

Chapman’s primary point is not about whether the former president was indeed conceived in the Atherton House, which happens to be located directly across the street from the architecture school. His interest is in the fate of the house itself, which is slated for major structural changes that come as part of an $8 million agreement in 2016 between UH, the UH Foundation and the YMCA of Honolulu.

According to a press release at the time, the foundation planned to spend up to $5 million on renovations and upgrades. The property consists of the Charles Atherton House and the Mary Atherton Richards House.

The Honolulu Star-Advertiser reported last year that the plan now calls for a $58.6 million “innovation and entrepreneurship center” where students will live, learn and work.

Chapman, who also serves on the Hawaii Historic Places Review Board, is not crazy about the plans.

“The unfortunate scheme calls for the demolition of the 1959 Mary Atherton Richards Building and the partial demolition of the Charles Atherton House, leaving only the street-facing façades,” he writes in his paper, which you can read below.

The thought of seeing an “Obama Was Conceived Here” plaque on the pink façade got my mind running. It’s not the same as, say, “George Washington Slept Here,” but there is a great deal of public interest in all things presidential.

It also got me wondering why Hawaii has yet to name something after its only island-born president, in spite of several concerted attempts.

I put the conception question to Neil Abercrombie, who arrived in Hawaii by way of New York the same time Obama Sr. arrived by way of Kenya in the fall of 1959, shortly after Hawaii became the 50th state.

“It’s more than possible,” Abercrombie told me about the Atherton speculation after first laughing. “In my mind’s eye the answer is ‘yes.’ I would have not have thought of it unless someone mentioned it.”

Abercrombie said he never met Obama Sr., a close friend, at the Atherton House but confirms that he did indeed live there in the early 1960s.

“Every weekend we would gather in someone’s apartment and play Sonny Terry and Brownie McGhee LPs on a record player and eat pizza and drink beer,” he said.

Some 50 years later,  in April 2011, it was Abercrombie — then governor — who strongly condemned Donald Trump’s birther conspiracy about then-President Obama and said it was promoted for political purposes. Abercrombie pointed out to reporters that he was in Honolulu when Obama was born and first met him as an infant.

“Let’s be serious,” the governor told news media including Fox News and USA Today. “It is simply reprehensible to have this kind of conversation. Insulting someone’s mother and father speaks about the person who is doing it.”

As for the failed local efforts to name something after Obama, Abercrombie notes that the former president has never pushed the idea.

“And it wasn’t that long ago that he was president,” he said.

Still, other locales have named things like landmarks, schools and highways after Obama. USA Today reported in 2019 that there is a Barack Obama Way in New Albany Township, Indiana; a Barack Obama Boulevard in Pahokee, Florida; and a Barack Obama Elementary School in Richmond, Virginia.

Wikipedia lists scores of places and things named for Obama. He even has an animal species named after him, placida barackobamai, a sea slug. And some have tried to make a buck by hawking Obama-themed tour maps.

Chang and his fellow legislators also have considered — and abandoned, for now — requiring the state Department of Land and Natural Resources to place markers throughout the state to indicate “significant sites” in Obama’s life, ranging from the Kapiolani Medical Center for Women and Children (where he was born), the Baskin-Robbins on King Street (where the teenage Obama worked) and the Koko Crater Trail (where he has hiked).

Asked about the lack of physical honors, Colin Moore, a political scientist and director of the Public Policy Center at UH Manoa, says, “I think the big issue is that he is still alive, and most of the other people who have had things named after them are dead.”

Moore also observes that Obama’s political career began in Illinois, which will house his presidential library. And, although he visits annually to vacation, Moore says, “There’s a sense that he isn’t linked to Hawaii as, say, Harry Truman is linked to Missouri or Ronald Reagan to California.”

It’s worth noting, however, that Obama held the inaugural program and workshop for his Obama Foundation in Honolulu in 2019, even though it is a Chicago-based nonprofit that oversees the creation of the Barack Obama Presidential Center.

Fittingly, the ceremony was held at the East-West Center. Obama joked in his remarks that “I basically wouldn’t exist if it were not for the University of Hawaii.”

He also said it’s “rumored” that he was born a mile from UH, although he said he could not vouch for it because he was “very small at the time.” 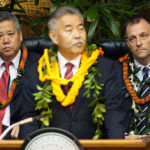 Danny De Gracia: Ige Still Has A Chance To Be A Decisive Leader. He Should Take It

The only structure or reminder of Obama that need be "named" will be on the illegal seawall for his Waimanalo compound that is being built.  There you can witness how the former president was able to skirt all DLNR laws repairing and extending the seawall to his property while others around the island are left to watch their property disappear into the ocean.  Not to say we should build seawalls on the North shore, but it does point out how political influence gets things done at city hall here and other places.  It's a perfect reminder that aside from being born here and attending Punahou that most of his formative years occurred in Chicago and during college.  Aside from the wonderful vacations that Obama had here there is little to really remember anything specific that was directed at Hawaii during his 8 years in office.  Kinda like his high school years, rather unremarkable.

Naming something:  Sooner or later, there should be something that will honor former President Obama within the Punahou School campus. It will make sense then for it is the most significant space as far as shaping the former president Obama. That makes the most sense.  Historic preservation: The Apartment makes sense as it tells of his growing up and being raised by his grandparents. The other places that have been mentioned somehow mocks what historic preservation is all about.   Chad Blair must have written this to really brings more attention to the UH Plan and historic preservation,  Given the virtual world that we live in today and  UH's past roles in supporting student and scholar exchange, future development should find a way to preserve  the Atherton buildings that will preserve how life and student exchange was then.

I tend to think of Hawaii's hesitancy to rename things as part of its distinct cultural identity. In much of the non-English-speaking world, it is a cultural and religious taboo to name places, structures and any other one-of-a-kind man-made objects after a living person. In fact, many jurisdictions require a cool-off period of a few years after the person's passing before a (re)naming proposal can be considered. By this standard, the renaming in 2017 of the Honolulu International Airport after the late Sen. Inouye, who died in 2012, was timed appropriately. Contrast this with the freewheeling way things are done in the mainland U.S., such as the renaming in 2001 of the San Jose International Airport after the then-U.S. Secretary of Transportation Norman Mineta. Nothing personal about these fine gentlemen, but I prefer the Hawaiian way of slow-walking renamings much more better.