Honolulu Mayor Kirk Caldwell is extending Oahu’s stay-at-home order until May 31, which could mean businesses on the state’s most populous island that have been hardest hit by the virus could stay closed longer than expected.

While the mayor said parts of the order could be relaxed throughout May, he gave no clear timeline. Much of how — and when — government officials decide to open the island back up could depend on how much COVID-19 testing physicians can perform.

The city will spend about $2 million to pay for 10,000 testing kits as well as the cost of testing at seven community health centers, Caldwell also announced. The money was meant for re-sanding Ala Moana Beach Park, but Caldwell said the funds would be better used to capture data on COVID-19.

“If it saves a life, or two, or three, how do you measure that?” Caldwell said at a press conference Tuesday. “We would probably spend more if necessary.” 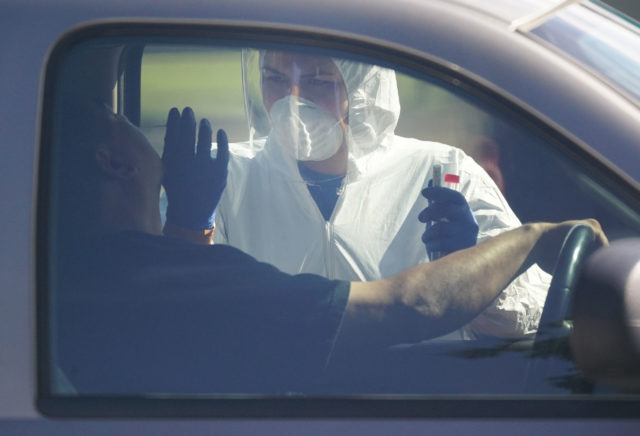 Honolulu is purchasing 10,000 testing kits to collect more data on the spread of COVID-19.

Oahu has gone two days in a row without any new COVID-19 cases being reported. However, Caldwell as well as some state officials and business leaders believe more testing is still needed before Hawaii can lift stay at home and work from home orders.

Caldwell said that, based on estimates the city was given March 22, Oahu would need to be conducting over 1,400 tests a day to track COVID-19 on the island.

Some of the health centers receiving the tests and funds have been testing for COVID-19 already, though at low numbers.

Caldwell said who qualifies for testing will be left up to individual health centers. Vijah Sehgal, the Waianae Coast Comprehensive Health Center’s associate director, said Tuesday that the center had already been testing some individuals who did not show symptoms but had come into contact with an infected person.

Guy Kaulukukui, director of the city’s Department of Enterprise Services, said the health centers have also lost revenue because of the pandemic, and providing them funds for testing could help.

Hospitals and businesses aren’t the only ones with lost revenue from the pandemic. The virus has also lead to projected downturns in government tax collections, meaning the counties and the state could have less money on hand to fund public programs and services.

City Councilman Joey Manahan, who chairs the budget committee, said Tuesday the city is expected to take a $130 million hit to its $2 billion budget. His committee has already axed millions from the mayor’s proposed budget.

While public meetings of the committee have been suspended until at least May 12, Manahan said the committee has been in discussions with Caldwell’s administration on further cuts.

Caldwell said the city has not yet received the $387 million promised as part of the coronavirus relief package. The mayor said he expects to announce how it will be spent later this week.

Caldwell said the seven health centers would also get $20,000 each from the city for telehealth programs that can allow doctors to connect with their patients remotely.

That $140,000 will come from the federal relief fund, Caldwell’s office said in a follow-up email.

While Caldwell plans to extend Oahu’s stay-at-home order until May 31, he said the order may be relaxed more and more throughout the month.

County parks will open up again for exercise starting Saturday, the mayor said. He warned people not to congregate or picnic in the park, and not to use exercise or playground equipment since the virus can live on surfaces for days.

He also said contact sports would not be allowed in the parks.

But opening the parks could be one small step to opening Hawaii’s economy. Contact tracing will still be necessary to see if COVID-19 is spreading.

And more testing could help government officials determine when to relax stay-at-home orders.

“We want to know, as we do this, we don’t see an increase of the virus and we end up with a spike and then we need to retreat,” Caldwell said.

COVID-19 Strain That Originated In Brazil Detected On Oahu