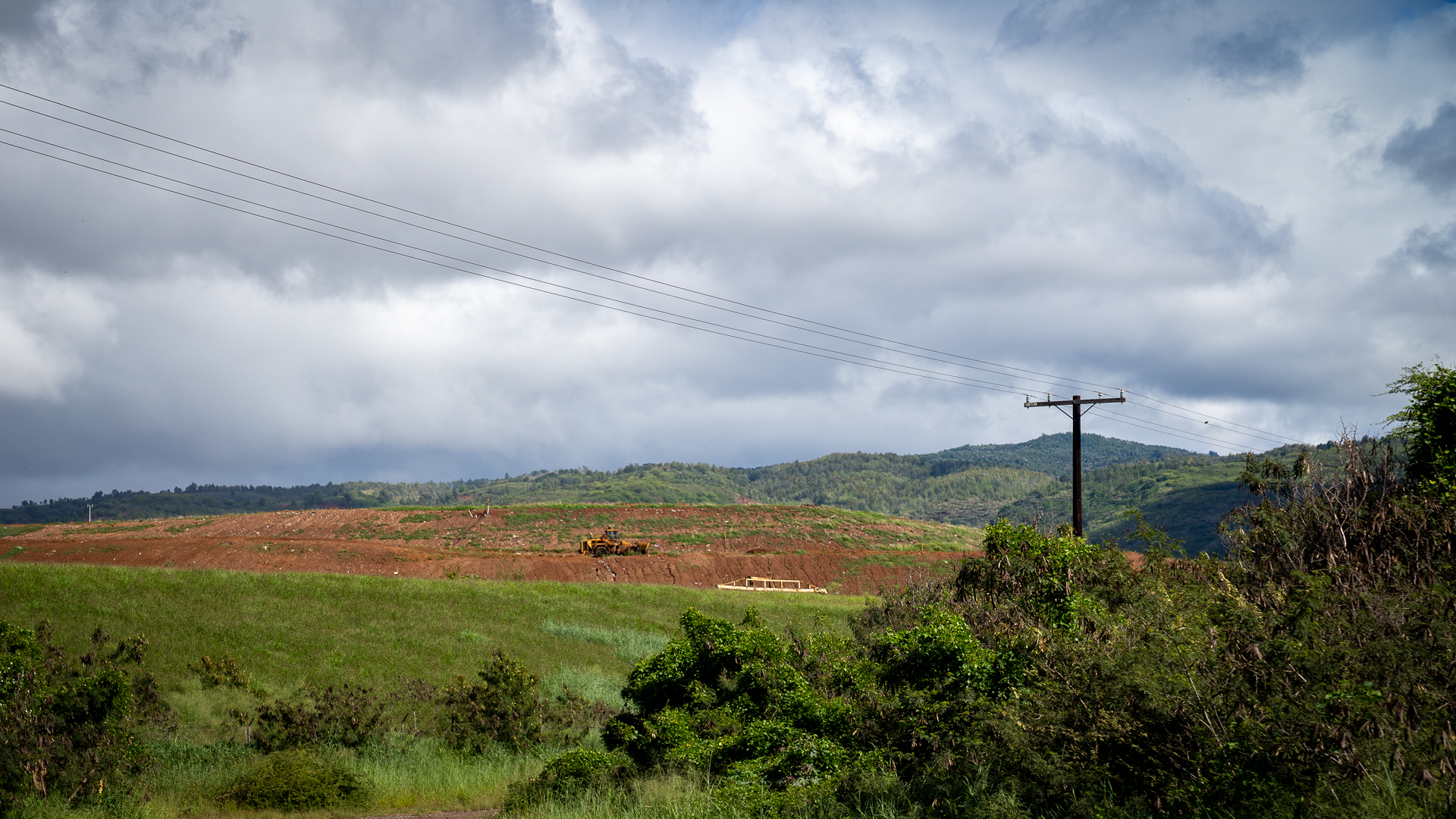 The island’s only landfill is filling up fast. But the places available to put a new landfill are severely limited.

With Kauai’s bulging Kekaha landfill approaching maximum capacity, the search for a new burial site for the island’s municipal garbage began 22 years ago.

But in some ways, it’s only just begun.

Getting a new landfill up and running is a long, slogging process that county officials estimate could take a decade to complete. The first step — locating a site that’s legally and practically equipped to host a landfill — has always been difficult, and the options in recent years have significantly narrowed.

The county originally identified eight potential sites for a new landfill. But recent state legislation wiped out some of those options and legislation in play this session would have eliminated even more. Opposition from federal and state regulators to three sites near Lihue Airport have shrunk the county’s list of possibilities to one: a state-owned parcel across the highway from the existing Kekaha landfill.

At stake is the potential environmental disaster that could take shape if the island runs out of space to dump all of the packaging, newspapers, bottles, drywall, furniture, food scraps, old roofing, soiled diapers, batteries, mattresses and everything else that gets thrown into trash cans and Dumpsters. And time is running out. As things stand today, the Kekaha landfill is expected to reach capacity in June 2027.

The site of the proposed Kekaha Mauka landfill is located across the street from the existing Kekaha landfill on the other side of Kaumualii Highway.

The Long Road Back To Square One

On Kauai, landfills can’t be built in areas with heavy rainfall because water and garbage don’t mix well. Water could potentially become contaminated by leachate, the contaminated fluid landfills produce, and can potentially leak should the leachate collection system fail.

For this reason, landfills are prohibited in tsunami inundation zones, 100-year flood zones and wetland areas. They’re barred within 300 feet of perennial streams and within 1,000 feet of the shoreline or a water well.

A viable site needs to be at least 60 acres. It also needs community buy-in. And it can’t be built on federal land, state conservation land or land with steep slopes.

This laundry list of landfill exclusion criteria leaves few options on the island.

A pair of county studies in 2001 and 2002 identified eight potential new landfill sites. In 2007, then-Kauai Mayor Bryan Baptiste convened an advisory committee to rank them.

Another county study in 2012 reevaluated the eight prospective locations. Finding them all technically and legally feasible, the study recommended county officials move ahead with the permitting process for a new landfill on a 270-acre state-owned parcel north of Lihue.

With enough room to absorb Kauai’s 91,066 tons of annual waste for 264 years, the site on Maalo Road offered more than double the capacity than any other contender.

In 2018, the county hosted a series of public meetings to collect community feedback on a draft environmental impact statement for the Maalo site. Public approval of the document is a crucial step before the permitting process can move forward.

But last year the county abandoned its plans at Maalo after the Federal Aviation Administration and the Hawaii Department of Transportation’s Airports Division opposed the project due to the potential for the landfill to increase bird strikes at Lihue Airport, according to county officials.

Landfills attract birds, which can damage aircraft and even injure, sometimes fatally, pilots and passengers.

Although the Maalo site sits just outside of a federally designated airport buffer zone that takes the shape of a six-mile radius around the airport, it’s close enough that federal and state regulators flagged the plan as problematic, according to county officials.

Without FAA and HDOT support, county officials figured their shot to compel state health regulators to permit the Maalo Road landfill would be at risk, and continuing to pursue it could ultimately waste the little time the county has left to forge a solution.

As such, the county is no longer considering building a landfill at the Maalo site, a difficult decision that rendered useless years of work by the Kauai Solid Waste Division.

On the county’s list of potential landfill sites, two other locations — Kalepa and Kipu in Lihue — have also been knocked out of the running due to potential airport proximity concerns.

In September 2020, the Hawaii Legislature passed a bill that became Act 73, a new law that prohibits landfills within a half-mile of a residence, school or hospital. The rule excludes two more options on Kauai’s list of potential landfill sites — Kumukumu in Anahola and Koloa on the island’s south shore.

State lawmakers were considering House Bill 1712 — it died in conference committee last month — which would prohibit waste disposal facilities on important agricultural lands. If such legislation becomes law in the future, it would disqualify another pair of potential Kauai landfill sites — Puu O Papai in Hanapepe and Umi in Kalaheo.

The county has decided to preemptively eliminate these sites from its dwindling list of possibilities to avoid another false start.

What remains? One potential option: Kekaha Mauka, a 176-acre state-owned parcel with less than a quarter of the capacity of the Maalo site.

Located across the highway from the existing Kekaha landfill, Kekaha Mauka offers potential savings due to the ability to re-use infrastructure. It would be the easiest and quickest site to bring online and begin operations. And it’s basically the county’s last shot.

“Take a look at the last administration,” said Kauai Mayor Derek Kawakami, referring to former Mayor Bernard Carvalho Jr. “They had 10 years (to figure this out) and we saw how challenging it is. They threw everything they had at it and they still fell short. The big difference is I don’t have that option. We absolutely have no option but to succeed. It’s on our shoulders to take care of this issue.”

Meanwhile, the amount of solid waste being produced on the island is rising.

“We’re at a point where we have five years left at Kekaha and it takes 10 years to really get a new site going,” said Kauai County Solid Waste Management coordinator Allison Fraley.

It’s a conundrum that could quickly become a public health hazard, said Fraley.

“If you could imagine if your trash wasn’t even picked up for a week, what that would be like if there was nowhere for us to take people’s trash to,” she said. “I mean, we’d have to ship it to the mainland. We’d have to ship it to Oahu. And we’re looking into that because, what if? What if we can’t find a landfill?”

The Kekaha landfill on Kauai is the final resting place for more than 91,000 tons of trash each year.

After seeing how efforts to site a landfill at Maalo Road played out, Kawakami said the county isn’t putting all of its eggs in one basket with Kekaha Mauka.

As it works through the process of permitting a replacement landfill there, the county is focused on revving up recycling to try and stretch capacity at the current landfill so it can continue to absorb the island’s waste until a new one is ready to be built.

County officials abandoned an ambitious goal to achieve a 70% waste diversion rate by 2020. The reason lies in a decision to hold off on a plan to implement a residential curbside program due to the high cost.

A residential curbside recycling program is still on the table, Kawakami said, but he added that research shows it would only increase the island’s waste diversion by about 5%, according to Fraley.

“The cost involved with curbside recycling and the infrastructure required for curbside recycling would not produce the result that I think many advocates are hoping for,” Kawakami said. “But that doesn’t mean that we’re not looking at it.”

In addition to boosting diversion, the county is seeking state approval for a vertical expansion of the existing landfill that would keep Kekaha operational through 2030.

At the top of Kawakami’s to-do list is figuring out a new place to send the island’s construction and demolition garbage, which makes up the largest portion of the disposed waste stream.

“The biggest bang for our buck right now that would probably make the biggest difference as far as diversion would be creating a construction and demolition reclamation center so that we’re not sending construction waste to the landfill because that takes up a lot of space and that space equates to the amount of time that the landfill has left to be operational,” he said.

The county is also exploring ways to create more capacity at the current landfill, as it did in 2019 when state regulators granted the county approval to build a 6.6-acre lateral expansion.

But there’s no more lateral space available. So now the county wants state approval to build a vertical expansion that would extend the life of the Kekaha landfill to November 2030. The expansion would allow the county to build up a portion of the landfill by an additional 65 feet for a new maximum elevation of 185 feet above sea level.

Excavating waste from the oldest part of the landfill, separating out recyclables and reburying the waste on top of the landfill’s newest section is another method the county is exploring to gain additional space for more garbage.

There are no waste composition records for the closed Phase I area of the landfill where the mining would take place, however, so there is a risk of uncovering hazardous waste.

And if these plans don’t work? In one worst-case scenario, the island may try to ship its waste off-island — an expensive, unsustainable and legally complicated quagmire.

Kekaha is the host community of Kauai’s only landfill.

Is It Fair? ‘Absolutely Not’

Kekaha has carried the burden of hosting the island’s dumping ground since the 1950s.

But is the community amenable to providing Kauai with a place to bury its trash for another 50 or 60 years?

Founded in 2008, the Kekaha Host Community Benefit Fund seeks to “balance the need for safe disposal of solid waste with the sacrifices borne by the host community.” It does this primarily by providing Kekaha nonprofits with money.

Since 2012, the fund has given out almost $3 million to pay for everything from residential solar panels and student sports team trips to community gardens and supplies for local food banks.

The Kekaha Host Community Benefits Fund only receives money as long as the Kekaha landfill receives trash, but the landfill will always be there.

Whether it’s worth it to the community to continue to receive money by taking on another landfill is a question that the people of Kekaha will need to hash out.

“Do I think it’s fair to the community of Kekaha? Absolutely not,” Kawakami said. “This is a community that’s had to deal with decades and year upon year of having to host everybody’s trash. But at the end of the day, that host community benefit is a tool that we can utilize to at least try to make that community whole.”