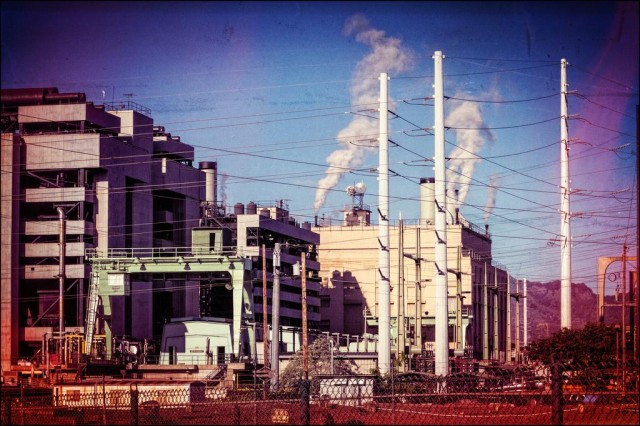 How A Mideast War Made HECO Start To Think Green

The Arab oil crisis brought a new awareness of the promise of renewable energy. But the spark fizzled. Hawaiian Electric was hooked on oil.
By Eric Pape / July 20, 2016
Scroll to Read

In 1971, for the first time in 16 years, Hawaiian Electric Co. asked the Hawaii Public Utilities Commission to approve a rate hike.

Customers had grown used to paying about 2.5 cents to power a 100-watt light bulb for 10 hours (about one-tenth of today’s average rates in the islands).

But HECO’s annual report that year warned shareholders that the utility’s largest cost was no longer federal and state taxes. Instead, the cost of oil to power the utility’s numerous generators had jumped 29 percent in a single year. And tensions were building in the Middle East, indicating prices might go even higher.

By the early 1970s, oil was absorbing 25 cents of every dollar of the company’s revenue, according to a history of the company by Dudley Pratt Jr., a HECO engineer who became an influential leader at Hawaiian Electric.

Customers were already feeling the pinch at the gas pump, so Hawaii’s consumer advocate, who represents ratepayers before the commission, began to question what he considered to be unnecessary spending by Hawaiian Electric.

Alan Lloyd, an executive staff engineer who spent 43 years with the utility, was called in to explain why HECO was spending money on, for example, ethnic food festivals — events that had grown hugely popular after World War II.

The consumer advocate suggested the utility should be teaching people to conserve electricity instead.

“You are making a good point,” Lloyd recounted recently. “We could do that at parks and high school cafeterias and places like that and 10 people would come to each. At our ethnic cooking festivals, we get 800 people to each of these and we give them (conservation) information. As Mary Poppins said: A spoonful of sugar helps the medicine go down.”

The Public Utilities Commission approved a rate hike of 5.9 percent. And while that helped balance Hawaiian Electric’s books, the company faced a bigger problem: the era of reliably cheap oil was ending.

On Oct. 6, 1973, Egypt and Syria launched a coordinated assault on Israel to reclaim land the Jewish state had seized during the Arab-Israeli war six years earlier.

The attack, which took place on the sacred Jewish holiday of Yom Kippur, caught Israeli Defense Forces off guard, allowing Egyptian fighters to sweep deep into the Sinai Peninsula. Syrian forces, meanwhile, struggled to take back the Golan Heights near the Israeli border. Israel gathered itself and promptly recaptured the area and, by Oct. 25, there was a ceasefire.

Oil-producing countries in the region chopped petroleum production by 5 million barrels per day to inflict financial pain on countries — especially the U.S. — that were arming Israel. The price went up by 70 percent — to just over $5 a barrel. A year later it was $12 a barrel.

Arab producers cut off exports to the U.S., and the oil embargo caught America off guard. Gas rationing was implemented throughout the country but prices still soared and long lines at the pumps were the norm. In 1973, the stock market crashed and didn’t recover until December 1974.

In Hawaii, fuel rationing was in place for the first time since World War II. Prices surged here as limits on gasoline purchases took hold. In 1974, gas was doled out every other day, depending on whether your license plate ended in an odd number or an even number.

Fights broke out as frustrations grew and people sought to protect their place in line. Cops were forced to supervise traffic lines to keep the peace.

Early one morning in 1974, Chuck Freedman was crammed into his rickety old Datsun, waiting for a gas station to open in Hilo so he could drive to Kona where he was involved in building a new Head Start center. A pillow and blanket did little to make the pre-dawn wait better.

Freedman, who would later go to work for Hawaiian Electric as a company spokesman, was the deputy director of an anti-poverty program and he did a lot of driving as he set up daycare programs on the Big Island. He needed plenty of gas to cover the distances between the facilities that spread out over the Big Island.

“If you were rationing gas, you didn’t have anything left for HECO.” — Former Gov. John Waihee

And while motorists like Freedman huddled in their cars waiting their turn to pull up to a pump, Hawaiian Electric struggled with the skyrocketing cost of oil in a way few people understood.

HECO had been using oil to run its generators for nearly 70 years. Nearly all of its power came from oil so when the price of a barrel of oil jumped 400 percent overnight, the utility — and its customers — suffered.

“That moment is when HECO and everybody else started to talk about oil and our dependence on it,” said John Waihee, who was a young man in the islands at the time and would later become Hawaii’s governor. “We were rationing gas. If you were rationing gas, you didn’t have anything left for HECO.”

Shocked by the size of their electric bills, many customers began to use less power. HECO’s fears of a downward revenue spiral grew.

The Dawn Of An Energy Renaissance

Hawaiian Electric along with the state’s political leaders began to think about getting off oil. They talked about geothermal, solar, wind, wave energy and other efforts. In 1974, the state created the Natural Energy Laboratory of Hawaii Authority. Over the next 40 years, NELHA would invest more than $100 million exploring emerging renewable and ocean-based energy technologies at the Hawaii Ocean Science & Technology Park on the Big Island.

It was four years after Earth Day had captured the imagination of a youthful generation on the mainland and Hawaii found itself in the middle of a serious discussion about environmental problems associated with oil and its dependence on fossil fuels. Cheap oil was not-so-cheap anymore and was increasingly perceived as polluting and too expensive.

Still, it was the cost of oil that fueled Hawaii’s nascent renewable energy movement, not an altruistic effort to save the planet or even the islands.

“Alternative energy was actually a solution to the cost of fuel,” says Waihee. “You don’t tell people in 1970 language, ‘This isn’t about cost; it is about saving the planet.’ It was cost.”

Former Gov. Ben Cayetano notes the irony: Hawaii’s “temporary” tax credits are still in place today, in one form or another, and in recent years the credits sparked the installation of thousands of rooftop photovoltaic systems in the islands, making the state one of the leaders in solar energy.

But in the mid-’70s, although the oil crisis forced a re-evaluation of Hawaii’s energy world, “none of it was really deep,” Cayetano says.

“It didn’t seem like there was a sense of urgency like many places have today,” he says. “I don’t recall any real strategic kind of discussion about moving to alternative sources.”

For one thing, information about what others were doing to rein in skyrocketing prices was hard to come by. Stories didn’t zip around the internet or pop up in news feeds like they do today.

“You got to remember back then there was no email. There was no internet,” says Cayetano. “Our contact with the mainland was this: We had to go there.

“In that sense the information we got was somewhat limited. If you lived in California or other states, it was much easier to get information. There might have been a lot of talk about energy, but the scope was very narrow.”

“There was,” says Alan Lloyd, the former executive HECO staff engineer, “a before and after the oil embargo.”

A Time Of Uncertainty And Angst

Meanwhile, oil prices continued to spike, shooting up and down in the 1970s and ’80s, making for a very volatile energy business.

Robbie Alm, a former HECO executive who is now an unpaid advisor to Gov. David Ige, said spikes may have been short-lived but they caused uncertainty.

“It goes up for no more than three of four months and then it comes down,” he said. “With a spike like that, two or three bills get you angry, and then it goes down and your anger subsides.”

Energy-driven inflation washed through the broader economy, both nationally and in the islands, short-circuiting the remarkable economic growth in Hawaii since 1959 when it became a state.

“There was a before and after the oil embargo.” — Alan Lloyd, former HECO engineer

America’s involvement in the Vietnam War had brought economic benefits to the islands via increased military spending, but by the time Saigon fell in 1975 the cost of the war had taken its toll. High oil prices and increased gasoline and electric costs added to Hawaii’s economic pain.

The economic downturn was exacerbated by the rapid decline in the local pineapple industry. Years earlier, Hawaii’s historic pineapple producing companies began to move overseas in search of far cheaper labor and land. But in the mid-’70s more and more plantations were being shuttered.

Then things got worse.

In 1979, at the tail end of a decade that became synonymous with inflation, the Iranian revolution against a U.S.-backed regime there led to a second oil crisis. Students in Tehran stormed the U.S. embassy, taking more than 60 people hostage in a standoff with the U.S. that would last for 444 days.

Then Iran and Iraq went to war and oil production in Iran as well as Iraq slowed to a trickle. The price of a barrel of crude climbed to more than $40 — a far cry from the $2.50 a barrel it had been in 1970.

Oil prices eventually slipped back to pre-crisis levels. But not before Hawaiian Electric went on an investment binge, spending $91.7 million on new facilities in 1980. It was the largest construction budget in company history.

Some of the spending was in response to growing environmental concerns. The company had said it needed to bring down sulfur dioxide emissions and switched to low-sulfur fuel oil a decade earlier. But that change, combined with new construction, added almost $50 million a year to customer bills.

In 1982, turbulence was in the air around the islands — both economically and physically. The region’s most intense storm season ever recorded was closing in on Hawaii.

On Nov. 23, 1982, the very last storm of the Pacific hurricane season slammed into Kauai and Oahu with 90-mile-per-hour winds and storm surges that damaged or destroyed more than 10,000 homes. Hurricane Iwa sent about 7,000 people fleeing to the protection of shelters.

It cost $316 million to repair the damage caused by the storm, making it the most expensive natural disaster in Hawaii history.

As authorities surveyed the rubble of homes and fallen power lines, they discovered that large electric transmission lines on Oahu had been destroyed.

The hurricane knocked two of Oahu’s three power plants off line and eight of 14 large transmission lines were out of commission. The plants were forced to switch to emergency power just to keep their own lights on and the facilities operating.

Ninety percent of the power lines in Waianae went down. Only Pearl City, near the Waiau Power Plant, made it through the days after the storm without disruption. Elsewhere on Oahu, residents faced rolling blackouts, especially in East Honolulu, as HECO struggled to get the system fully functioning again. It would be two weeks before the whole electrical system was back on line.

But the hurricane had exposed a deeper problem: Hawaii’s aging electrical system.

Next: Hawaiian Electric transforms itself.