What's Next For The Company That Shaped Hawaii History? - Honolulu Civil Beat 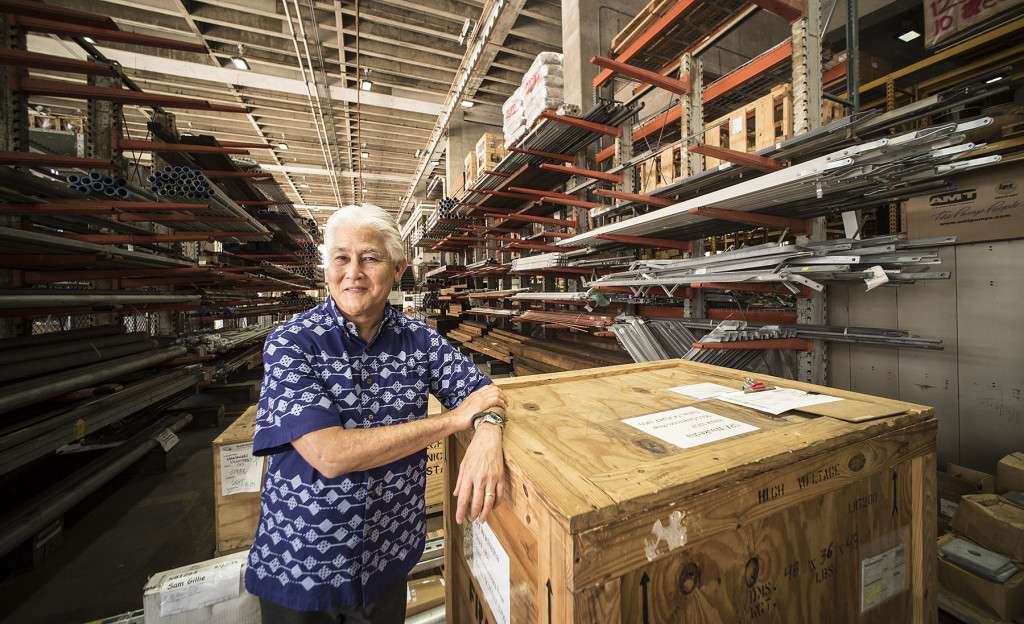 What’s Next For The Company That Shaped Hawaii History?

The president of Hawaiian Electric Co. discusses how the utility plans to get Hawaii to a 100 percent renewable energy future and the difficulties it faces.
By Eric Pape / August 2, 2016
Scroll to Read

How does a company formed in the 19th century reshape itself to become the leading light of 21st century utilities that Hawaii believes it needs?

Hawaiian Electric Co. President Alan Oshima says his company is clear on what it is supposed to do; now HECO just has to do it.

In a series of discussions about the past, present and future of Hawaiian Electric, Oshima comes across as an agent of change as he talks up the company’s devotion to renewable energy.

“We don’t want change to happen to us,” he said in a recent interview at his Richards Street office. “We want to lead that change.”

Oshima points out that HECO has the most renewable energy per capita in the country and that means the company “has had to change faster than any other utility.”

But piling on as much renewable energy as fast as it can is not the way to get Hawaii to the future it has envisioned — to be at 100 percent renewable energy by 2045. Instead, the utility must consider the cost, a balanced portfolio of energy sources and the need for reliability, he says.

“I think the rush to get there has to be tempered,” says Oshima. “People’s expectations about getting to 100 percent real fast are unrealistic.”

He also points out that the right technology will be crucial.

And some of the equipment that could facilitate ramping up renewable power usage — like home storage batteries — remains far too expensive to use on a broad scale. Electric cars could also end up playing a crucial role by evening out the energy consumption and storage load, but not enough people drive them yet.

“We should do what is better, cheaper and what is environmentally safe,” Oshima says. “Every decision in the utility context is pretty high cost and pretty long range.”

HECO is in the midst of a learning process, exploring cutting edge efforts far beyond the offices, labs and power stations of Hawaiian Electric.

That exploration kicked into high gear with Hawaiian Electric’s recent effort to merge with NextEra Energy, a Florida-based utility company that offered $4.3 billion to take over Hawaiian Electric Industries, HECO’s parent company that includes the utilities on Maui and the Big Island as well as American Savings Bank.

Oshima says working through the merger as well as going through the regulatory process afforded Hawaiian Electric a window into the workings of a more efficient and modern electric company that had very different ways of doing things.

NextEra’s internal culture of perpetual improvement, he suggested, rubbed off on Hawaiian Electric.

“I see a utility structure where people are trying hard to change,” Oshima says about his company now. “There are things we are doing now that we couldn’t do a year ago.”

“What comforts me is that I see the organization responding to putting the customer first,” he adds.

But after a 19-month examination that included contentious public hearings and political maneuvering on the part of opponents as well as supporters, the Hawaii Public Utilities Commission last month rejected the NextEra proposal, saying it was not in the best interest of Hawaii.

Oshima seems to be over the setback. Now, he says, “We can start executing on things without that big docket hanging over us.”

There are a number of projects and programs in the works that HECO is eager to move forward on, Oshima says.

Hawaiian Electric wants to install smart-grid technology that would allow the company to better understand and communicate with its customers. NextEra had promised to complete that transition within three years but Oshima says it now might take five years.

Hawaiian Electric cancelled a number of renewable energy projects in recent months including a biomass energy plant and a geothermal project on the Big Island as well as solar farms on Oahu. A plan to import liquefied natural gas to power some generators was linked to the NextEra deal and fell apart when the merger was rejected.

But Oshima says HECO is ready to start moving on other projects.

One thing in the works is a collaboration with the Navy for a major solar project in the West Loch area near Pearl Harbor and Ewa Beach. It would be the second largest solar farm in the islands. Hawaiian Electric would build and run the 20-megawatt project, which could begin producing power in 2018. The proposal is expected to be submitted to the utilities commission soon.

Oshima also cited a 24-megawatt wind energy generation facility in Kahuku known as the Na Pua Makani project, among others.

Oshima says HECO is working its way through what it sees as a time of transformation. But it’s doing it in a way that makes sense.

“We are doing things in a measured and reasonable manner and not reacting to every person with an interest in a given industry or technology,” he says.

And the transformation isn’t just about HECO, he points out.

“I am not sure people recognize this: We need others to change too,” Oshima says. “Everyone is accountable, including stakeholders. Without them, we can’t get to 100 percent (renewable energy).”

Hawaii consumers pay by far the highest electricity rates in the country. So Hawaiian Electric’s shift to renewable energy sources — and away from the sometimes costly oil that has powered its generators for nearly all of the company’s 125 years — is being closely watched and openly commented on by critics and supporters alike.

Chuck Freedman, a former Hawaiian Electric executive who is now an advisor to U.S. Sen. Brian Schatz, says that no one should underestimate the challenge HECO faces.

“You can talk about it in the abstract but once you start to do it, it will affect everybody in the islands,” says Freedman. “It may change their behaviors, it could affect what they are paying.”

In the coming years, new anti-pollution measures will almost certainly slap further constraints on the company’s ability to produce power from cheap coal and low sulfur fuel oil, whose price is volatile.

And Gov. David Ige is adamantly opposed to bringing in liquefied natural gas, which might save consumers a lot of money, as a bridge fuel to replace oil.

HECO has also had trouble dealing with the rapid rise of solar power since 2008. The utility has had technical problems integrating so much renewable energy into the power mix.

In April, Hawaiian Electric articulated a 30-year vision that might get the company to the 2045 goals. It relies most heavily on rooftop photovoltaic power, but it also includes huge amounts of utility scale solar energy, as well as similar amounts of offshore and onshore wind energy. Geothermal is another component.

But the document is largely for “directional planning,” meaning it is more of a prediction than a forecast given the “rapidly evolving technology, changing energy policy and pricing, and many other variables.”

That is why it remains to be seen whether the proposal will garner buy-in from regulators, policymakers, customers and the company’s own shareholders.

And there is little doubt that the 19-month regulatory process leading up to the PUC’s refusal to approve the sale to NextEra absorbed human energy that might have been used, more practically, to advance Hawaii — and Hawaiian Electric — toward the state’s long-term goals.

Still, renewable energy advocates like Jeff Mikulina, executive director of the Blue Planet Foundation, see a silver lining in the lengthy process because it helped to clarify what Hawaii does — and does not want — from its electric company.

“Aside from the two-year timeout for all these policy decisions, I think we are in a good position,” Mikulina says. “We have more clarity about how the utility should better serve the customers.”

But the most important player in Hawaiian Electric’s world is arguably the Hawaii Public Utilities Commission, the board of governor-appointed regulators that has been watching over HECO since 1913.

Hawaiian Electric Co.’s headquarters on Richards Street is a stone’s throw from the commission’s offices.

Oshima and Randy Iwase, who chairs the commission, sometimes bump into each other in the neighborhood. Occasionally, they find themselves eating at different tables in the same restaurant.

And sometimes they even talk.

“If you live on this island as long as I have, you have to have lived in a cave to not know each other,” Iwase says. “The uninitiated, regarding the political process, find conspiracies in this.”

Iwase and Oshima spent much of the last year or so locked in the political death match that the proposed merger became.

So it might be surprising to hear Iwase’s view of HECO and Oshima:

“I can comfortably say, HECO is not Darth Vader. Alan is one of the good guys. … He is our part of the Force.”

For his part, Oshima also seems to hold no ill will toward Iwase and the commission. He’s more worried that the changes his company needs to make are not simply internal business decisions, as Hawaiian Electric found out when the merger was rejected.

Some things are simply out of HECO’s hands.

Public policy is one thing that the utility can’t control. Lawmakers and regulators may be the ones setting a direction, but Oshima thinks more collaboration is needed with the electric company.

“The scary part for me,” Oshima says, “is that much of what we need to do is not something we can control.”