Why Everyone Wanted To Work For Hawaiian Electric - Honolulu Civil Beat 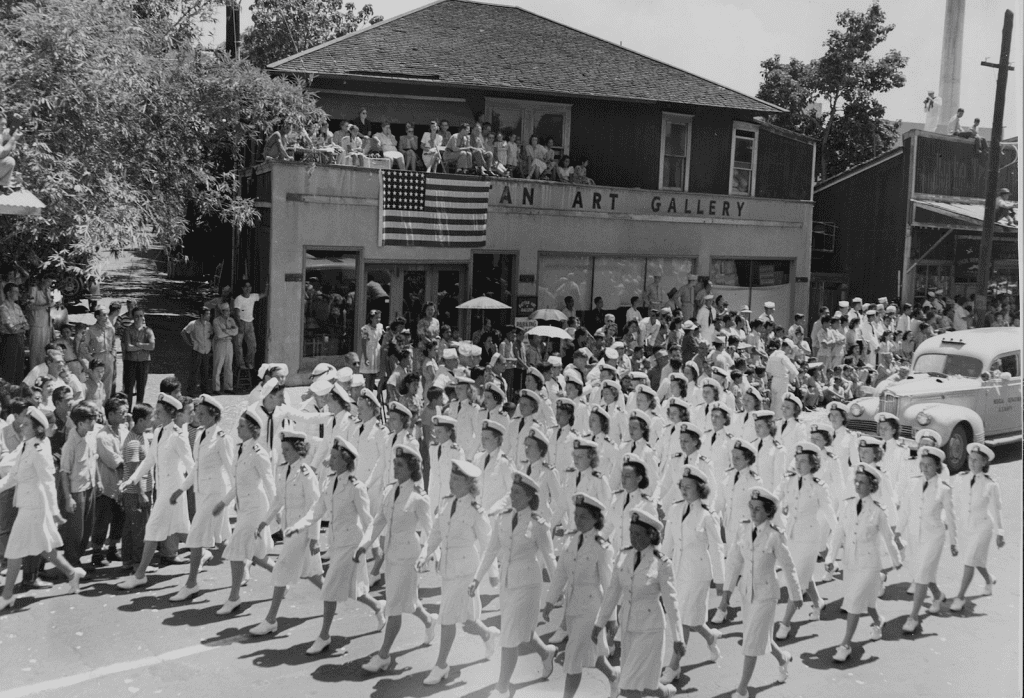 Why Everyone Wanted To Work For Hawaiian Electric

With a devastating war behind it, Hawaii embraced the promise of a bright future. And it needed HECO more than ever.
By Eric Pape / July 12, 2016
Scroll to Read
Military nurses helped Hawaii celebrate the end of World War II in a parade at Pearl Harbor on Sept. 3, 1945.

On Aug. 14, 1945, Honolulu had much to celebrate. Emperor Hirohito had just agreed to an unconditional surrender on behalf of Japan, ending World War II.

In Honolulu, still recovering from the shock of Japan’s stunning Dec. 7, 1941 air raid, the Japanese surrender had a super-sized effect. Jubilant soldiers and joyful citizens held a giant block party. People decorated their cars with large American flags and cruised the streets of Oahu.

The largest, deadliest war in history was over. Life in the islands could finally get back to normal. But four years after the bombing of Pearl Harbor, it was no longer clear what “normal” meant.

Hawaii’s hugely strategic role in U.S. control of the Pacific Ocean was obvious and the economy had been resurrected by the military mobilization. The pre-war days when plantations dominated the business of Hawaii seemed to be slipping further and further into the past.

But in the first couple of years following the war, big changes were the new order. Some 400,000 sailors and soldiers and their families who had been assigned to the far-flung Pacific outpost left the islands as the war machine powered down. That amounted to about half of Hawaii’s highest wartime population of 858,000. And so, the economy cooled and wages stagnated.

The Hawaiian Electric Company, however, continued to grow. The war years had brought improvements in service and power delivery, more power was being produced and the electrical infrastructure was far stronger.

In 1947, with a 10 percent boost in revenue and a vision for an even more prosperous future, HECO expanded into new offices on Ward Avenue, which it still occupies today.

The military was hardly done with Hawaii.

Three years later, in 1950, the U.S. was at war again, this time in Korea. And Hawaii’s military population jumped again, from 21,000 in 1950 to about 50,000 eight years later. The Korean War lasted three years, but a sizable U.S. military presence became an enduring fixture in the islands.

The implications for Hawaiian Electric were vast. By 1951, HECO’s infrastructure could comfortably deliver plenty of electricity to the entire island of Oahu. The company served 80,307 homes and businesses; residents of Oahu numbered about 350,000.

The flood of mainland military families had brought with them all the aspirations of a mainland middle class. For many, the American Dream included a good job and a large home, and larger homes meant space for more modern appliances — affordable refrigerators, pop-up toasters, mixers, electric stoves, range ovens and more. Life was becoming more efficient as technology advanced toward the common man — and especially the common woman.

Electric-powered home entertainment became the rage. Radios, which had become popular in the islands a generation earlier, were overshadowed by early black-and-white televisions.

One ad showed a woman ladling out soup and called on people to step into the modern culinary age. “Its definitely old hat not to cook with ELECTRICITY! Clean, cool… now faster, too.” (Opposite the woman in the kitchen is Reddy Kilowatt, a branded character that for decades highlighted the usefulness of electricity in customers’ lives.)

HECO had been selling appliances out of its Home Services Department for decades — and teaching people how to use them. But with the good times rolling after World War II, the company ramped up its efforts to help customers integrate a flurry of increasingly affordable new electric gadgets, especially in the kitchen, into their lives.

Huge audiences — primarily nicely dressed young women, mothers, aunties and grandmas — flocked to auditoriums to watch demonstrations of various kinds of dishes being prepared with the latest kitchen tools. Hawaiian Electric’s model kitchen was a big draw, too, and young cooks could get hands-on instruction.

Not everyone was able to buy into the American Dream that HECO was helping energize, of course. But the company still loomed large in their lives.

Walter Dods was born just before the attack on Pearl Harbor. Although Dods would later grow up to become chairman of First Hawaiian Bank and one of Hawaii’s most successful citizens, in the late 1940s his family was far too poor to afford many of the amenities of the modern era. Electricity was something to conserve or, often, to avoid using at all.

Dods was the oldest of seven kids. The family lived in a tin-roofed Quonset hut in Aina Haina in East Honolulu. They showered outdoors and chilled their food in an ice box, even as plenty of other families were buying refrigerators.

“We didn’t feel poor, but we were,” he says now. “We lived in pretty primitive conditions.”

During the war years, Honolulu residents faced strict blackout rules. People weren’t allowed to use lights at night; authorities were fearful that even home lighting might provide glowing targets for potential Japanese bombers.

The Dods family had one advantage that others didn’t — his dad was a cop, a Honolulu Police Department sergeant.

“My dad was the hero in our community because he was a policeman and he was allowed to drive his car at night,” recalls Dods.

That meant nighttime mobility. And mobility was at times crucial. With the headlights of his car painted black — a small slit in the paint let a precise ray of light through — his father could drive out of the area in search of necessities like groceries or medicine for neighbors.

Dods may not have grown up cooking on an electric stove or gathering around the family’s new-fangled radio to listen to the latest news from around the world, but Hawaiian Electric was still a part of his dreams.

“Your dream job getting out of high school was … you either worked for the electric company, the phone company or the fire or police departments,” Dods recalls.

By the time Dods graduated from high school in 1959, HECO was one of the state’s largest employers. And when HECO crews pulled into a neighborhood, people applauded. The utility workers had become their own kind of local heroes.

For Ben Cayetano, Honolulu just after World War II had become something of a company town — and, to him, that company was Hawaiian Electric.

“Getting a job with Hawaiian Electric was a good thing — it was almost like the auto industry (in Detroit),” Cayetano says now. “You got a good job with GM (with) a union negotiating good pay raises that got you to the middle class.”

Born in 1939, Cayetano describes the Kalihi neighborhood where he grew up as blue collar. But it was not rundown, as many people tend to think now of the mixed industrial and residential area between the airport and the harbor.

“The homes in the area were modest, usually small and inexpensive; the well-kept yards were a sign of pride of ownership,” Cayetano would write decades later in his book, “Ben: A Memoir, from Street Kid to Governor.”

Cayetano’s father was a waiter at the private Outrigger Canoe Club and was often gone. But Ben and his brother, Ken, took advantage of the modern technology HECO was powering throughout the city, including spending afternoons at the Palama Theater in Kalihi or eating in a local saimin restaurant.

At age 19, Cayetano got into the International Brotherhood of Electrical Workers union and began earning $1.64 an hour as an apprentice with a company called Halfhill Electric. But, as he tells it in his book, the construction industry suffered a downturn in 1959 and he was laid off. After a series of blue-collar jobs, in 1963 Cayetano left Hawaii for college on the mainland, eventually graduating from law school.

To young residents of Hawaii struggling to find their place in a world no longer threatened by war and uncertainty, HECO and the burgeoning electric industry looked like a good bet.

But the future of Hawaii was about to arrive, again coming out of the sky on steel wings.

War in the Pacific had been fought largely with planes and the military’s need for the development of aviation spurred numerous advances in commercial air travel.

By 1949, the Boeing 377 could carry up to 52 passengers from the West Coast to Oahu in just nine hours. More passengers in a more fuel- and time-efficient craft translated into more visitors. Between 1946 and 1958, visitor traffic to the islands mushroomed 1,600 percent.

Such growth meant jobs in construction, service and infrastructure that required more power. HECO met the challenge with a new generating station next to Pier 7 on the waterfront.

Bolstering the already existing Alakea plant next store, a new steam turbine unit at the Honolulu Power Plant began churning out electricity in 1954. A second large unit at that complex, which is kitty-corner from the Aloha Tower, came online three years later.

But that, as it turned out, was just the beginning.

Next: The Boeing 707 comes on line just in time for all those tourists to visit America’s newest state.