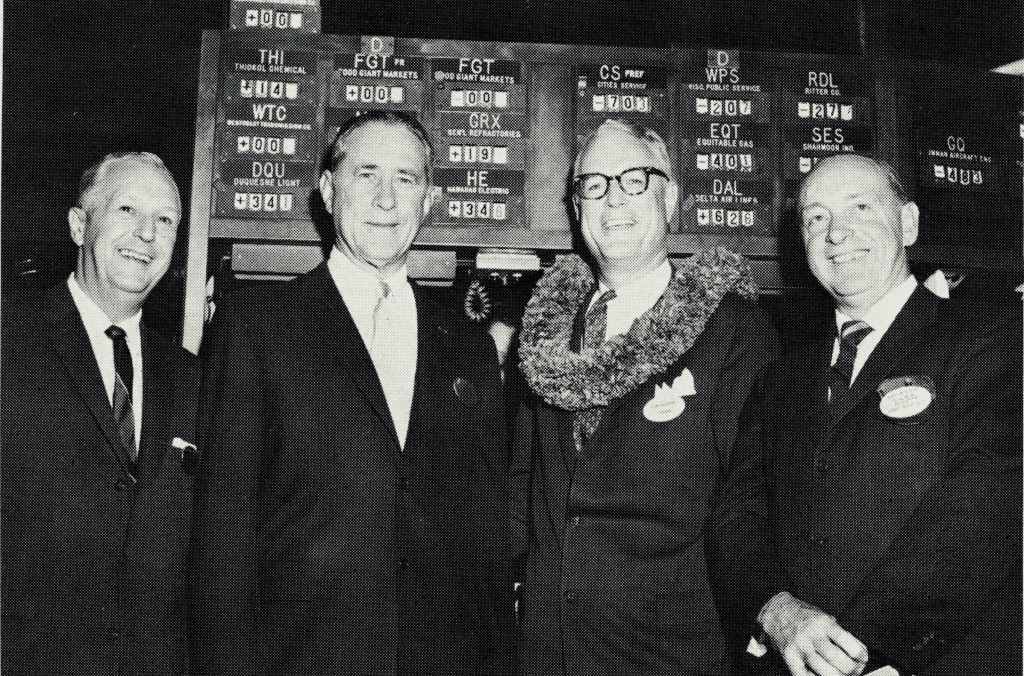 What Happened When HECO Went To Wall Street

On a promising summer day in 1959, Walter Dods headed to Waikiki for a celebration he wouldn’t soon forget.

Barely 18 years old, Dods was still a kid looking for fun when he joined a throng of other Honolulu residents and visitors on Aug. 21, 1959 — the day the Territory of Hawaii became America’s 50th state.

Roads were blocked off and hotels served food on streets that would be illuminated throughout the night. Thousands of pedestrians ate, drank and danced to live Hawaiian music that seemed to be everywhere.

“It was,” Dods recalls, “like a big party on Kalakaua all day and night.”

In 1959, with a population of about 600,000, Hawaii became America’s southernmost state and Honolulu the westernmost state capital, further solidifying the nation’s anchor in the Pacific. A star representing the islands would soon be sewn onto the American flag.

Dods, who had already worked for years to put himself through a Catholic high school in Kaimuki, came of age at a moment when Honolulu was ripe with opportunities. And he seized them, ultimately becoming one of the most influential businessmen in the state.

Like Dods, the Hawaiian Electric Co. would surf on the state’s promising economic tides to rise faster and further than the four men who created HECO in 1891 with a dream of providing electric light to a small but growing city might have imagined.

Over the next decade, to keep up with the surging economy, Hawaiian Electric would increase its electricity production by as much as it had in the previous 68 years, facilitating the economic development of Honolulu. The new state capital and in fact the entire state were going into overdrive.

The biggest boon of statehood for Hawaii was economic. The more complete integration of the islands into the U.S. opened the door to bolstered trade, technology and development. HECO was still the only electric company on Oahu, which was the state’s business center and home to most of Hawaii’s population. The company prospered.

In many cases, prices fell even as salaries grew. Even the electric appliances that many had come to depend on, thanks in large part to HECO, became much more affordable. Consumers enjoyed growing buying power and buy they did.

This stamp was issued in 1959 to commemorate Hawaii’s admission to the union as the 50th state.

“Competition from Sears & Roebuck was big,” says former Gov. John Waihee, who was still a teenager when Hawaii became a state. “Before that, people on the mainland were buying things for $100, but we were paying $350. Statehood made things affordable. Everything changed.”

For one, there was a whole lot more money circulating. Many jobs paid better than before. More people enjoyed an education, including former soldiers who benefited from the GI Bill.

“The idea of going to the mainland to college was unthinkable for my parents’ generation,” says Waihee. “I flew to Michigan to go to school — on a prop plane.”

With World War II still echoing, military and federal investment in the islands continued at a healthy clip.

But the real momentum was in tourism.

Pan Am and United Airlines debuted regular passenger jet service that brought flocks of new visitors. An archipelago of beautiful remote islands in the Pacific had been drawn almost unimaginably close to the mainland.

A generation earlier, it took the SS Lurline cruise ship five full days to transport 722 people from the West Coast to Hawaii. In 1959, Boeing 707s flew 150 passengers to the islands from California in a few hours.

Honolulu International Airport was beefed up in 1961 to handle a surge in air traffic.

Honolulu International Airport began getting a makeover in anticipation of statehood.

On Feb. 5, 1959, at a groundbreaking ceremony, Gov. William Quinn set off a small charge, as a history on the state Department of Transportation website put it, to “blast Honolulu into the commercial jet age.”

This new “jet age facility is the first of our major public improvements when Hawaii becomes a state,” Quinn said. “A facility which Hawaii will be proud of.”

Francis K. Sylva, chairman of the Hawaii Aeronautics Commission, noted that a long delay in building a new airport for Hawaii was actually a good thing. The state could now draw on the experiences of other airports around the world.

“The new terminal facilities will be the first in the nation to be built for the commercial jet-age from the ground up,” Sylva said.

The airport construction was just part of a surge of infrastructure spurred by Americans’ growing interest in the islands. Tourism began to replace agriculture as Hawaii’s primary economic engine as the visitor industry ballooned and sugar and pineapples waned.

Hawaiian Electric was always in the background of development, powering the growth of a new state.

The Ala Moana Shopping Center opened in 1959, after years of construction. The $25 million development initially contained 87 stores, making it, according to various reports at the time, the nation’s largest mall.

In 1961, the marina community of Hawaii Kai was dredged out of 6,000 acres at the base of Koko Head crater, near choice beaches and a prime diving location. The first homes sold for about $40,000.

Waikiki was also on the rise. Literally.

Large hotels and apartment buildings climbed skyward. The 11-story Aqua Oasis hotel opened in 1960. Conrad Hilton purchased most of the Hawaiian Village in 1961 and re-dubbed it the Hilton Hawaiian Village. In 1965, the 279-units Hilton Lagoon apartments opened for business.

Hawaiian Electric helped make the shift to ever-taller hotels and buildings possible. It powered the elevators, the large air conditioning units and the numerous other amenities that the American middle class increasingly expected, whether they were on vacation or living in Honolulu.

Supermarkets found footholds in a growing Honolulu. And the second phase of the Ala Moana Shopping Center — which included a total of 1.365 million square feet of leasable space — opened in 1966.

In the 1960s, Ala Moana Center construction helped make it one of HECO’s biggest customers. Construction is once again re-shaping one of the world’s biggest shopping centers.

Ala Moana was a big HECO customer, the largest single-customer project in Hawaiian Electric’s history, covering an area that was larger than downtown Honolulu. As the company prepared for the future, HECO expected to bring in $250,000 a year from electricity sales to the huge shopping complex.

Pioneer Tower on Fort Street Mall. The James Campbell Building at Fort and Merchant streets. The Financial Plaza of the Pacific. The new Hawaii State Capitol. Some of the city’s biggest and most iconic buildings went up in the 1960s.

People began to joke that the state bird was the crane — the construction crane.

Hawaiian Electric needed to bring on line new facilities to keep the city and the economy charged up. The answer came on a remote beach in West Oahu.

To secure investment funds, the company sold the Honolulu Electric Supply Co. for nearly $3.8 million and put the money into technical improvements.

By 1966, 18 airlines officially sought to fly to, or through, Honolulu.

Tourists were spending $300 million a year, transforming the visitor industry into Hawaii’s most dynamic economic driver. People who were finding themselves out of work at plantations were finding new jobs in hotels and restaurants.

One million tourists visited Hawaii in 1967.

Six powerful new steam turbines that remain in use today clanged to life at HECO’s Oahu plants. Electricity production on Oahu increased by as much between 1959 and 1969 as it had in the entire 68 years Hawaiian Electric had been in business before then.

The first unit at the Kahe Power Plant in West Oahu was nearly finished when this photo was taken in March of 1963.

With Hawaii becoming more interconnected with the mainland, as well as the world beyond, Hawaiian Electric began to look beyond Oahu for opportunities.

On Oct. 13, 1964, the 73rd anniversary of the founding of Hawaiian Electric, company President Ralph Johnson traveled to New York for an historic occasion. In the middle of a decade of remarkable expansion, the company went public.

Johnson grinned as he stood beside New York Stock Exchange President Keith Funston, who wore a thick lei and a broad smile. The Big Board listed “HE, Hawaiian Electric, at +34.6.” While thousands of stock tickers around the country offered up HECO shares, Johnson himself bought the first 100.

Johnson’s wife had adorned the head of the stock exchange with the traditional Hawaiian lei in the visitors gallery since the NYSE wouldn’t allow women on the trading floor.

Its first public stock offering secured about $90 million that the company used largely for infrastructure investments.

It was the need to boost its infrastructure — especially plants and substations — that prompted HECO to go public, according to the 1991 book, “Hawaii: The Electric Century,” by Carl Myatt.

In some ways, Hawaii was joining the big leagues of companies in the islands. “The mainland listing will give us prestige now enjoyed by only two other island firms: Hawaiian Telephone and Castle & Cooke,” Johnson wrote in a letter to Hawaiian Electric staff.

“The better we’re known, the easier we can market our securities,” he said in an excerpt published in Myatt’s book.

It was the first steps to securing outside investment that would ultimately lead to the broader diversification of the company. With people around the country suddenly able to buy and sell Hawaiian Electric stock, the company began gradually transforming ownership of what had been a closely held local company into one owned by many investors, as it remains today.

A Hawaiian Electric Light Co. plant on the Big Island is part of one of the two power companies HECO acquired in the 1960s.

Maui Electric Co. which had been started in 1921 by a group of business leaders on that island, was one of the first targets. In the mid-1960s, MECO had just taken over a pair of local competitors on Maui — Hana Light & Power and Lahaina Light & Power. By 1967, the island-wide, shareholder-owned utility served 13,250 customers.

In 1968, MECO was folded into HECO as part of a stock trade.

On the Big Island, Hilo Electric Light was the local utility company. In 1970, it merged with Hawaiian Electric and later changed its name to Hawaii Electric Light Co., or HELCO as it is commonly called today.

Thanks to the acquisitions and expansion in other parts of the state, Hawaiian Electric’s sales had doubled in the decade after statehood.

In 1971, as HECO picked up its 150,000th residential customer, the company was thriving and its customers had little reason to complain — they hadn’t faced a rate increase for 15 years.

Next: Unrest in the Middle East hits home thousands of miles away in a state dependent on oil for power generation.