Daniel Akaka, a longtime U.S. senator for Hawaii, has died. He was 93.

The cause was organ failure, according to Donalyn Dela Cruz, who previously served as the senator’s press secretary in Washington, D.C.

“He took his last breath this morning surrounded by his loving family at St. Francis,” said Dela Cruz, referring to the care facility in Honolulu.

Akaka’s death drew myriad comments and condolences from a wide spectrum of his colleagues and friends, among them former President Barack Obama.

“Michelle and I celebrate the life and service of our friend, Senator Daniel Akaka,” Obama said in a statement sent late Friday night. “He was a tireless advocate for working people, veterans, native Hawaiian rights, and the people of Hawaii.

“I was a teenager when Danny first served in Congress. He was one of the first people to welcome me with open arms when we served together in the Senate. He embodied the aloha spirit with compassion and care. Michelle and I send our deep condolences to Millie and his family, and to the people of Hawaii who loved him and whom he loved throughout his life.” 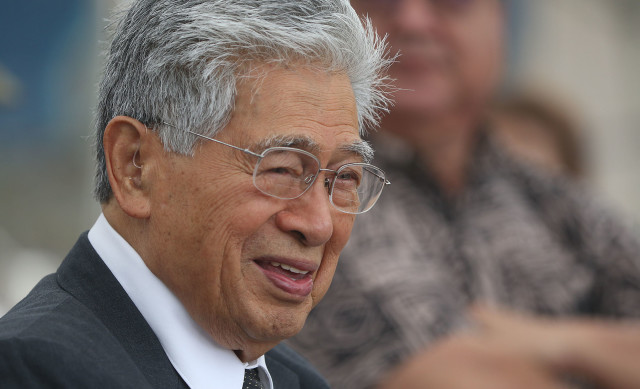 “He dedicated his life to serving the people of Hawaii as an educator, and in the U.S. Army, state government, the U.S. House, and the U.S. Senate,” she said in a statement, adding “In Congress, Senator Akaka’s care, empathy, and collegiality served as an example for us all.”

Hawaii House Speaker Scott Saiki said, “Senator Akaka served Hawaii with dignity, respect and humility. He never lost sight of his values and the need to protect our state and its people. Hawaii has lost an extraordinary statesman.”

The U.S. Senate historian’s office maintains a compilation of speeches and tributes given by senators. You can find Akaka’s remarks here.

The former senator recently visited the Civil Beat office to discuss politics, leadership and the secret to a long life. The occasion was the publication of his memoir, “One Voice: My Life, Times and Hopes for Hawaii” (Watermark Publishing, Honolulu, 2017). Listen to our podcast here.

And read more of Civil Beat’s own reporting on Akaka here.

Akaka was first elected to Congress in 1976 to represent Hawaii’s 2nd Congressional District, which covers rural Oahu and the neighbor islands.

He was appointed to the U.S. Senate in 1990 after the death of Spark Matsunaga, a fellow Democrat. He served there until he retired in 2013.

Akaka was the nation’s first‚ and only, senator of Native Hawaiian descent.

All told, he served almost 22 years in the U.S. Senate and, prior to that, more than 13 years in the U.S. House of Representatives. His departure from the Senate left a gap in Native Hawaiian leadership that remains today.

Akaka was born in Honolulu on Sept. 11, 1924. He graduated from the Kamehameha School for Boys in 1942, almost a year after the Japanese attack on Pearl Harbor.

Akaka served from 1943 to 1947 during and after World War II in the U.S. Army Corps of Engineers.

Using funding from the G.I. Bill, Akaka earned a bachelor’s degree in education from the University of Hawaii Manoa in 1952. He taught high school from 1953 to 1960. 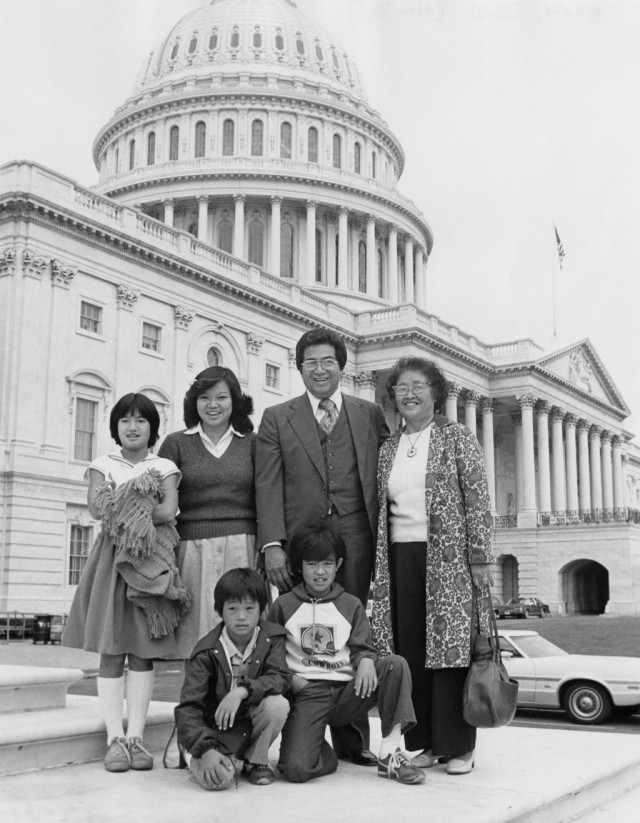 The then-Rep. Dan Akaka with constituents on the steps of the U.S. Capitol.

Akaka may be best known for his unsuccessful pursuit of legislation, known as the Akaka Bill, to federally recognize a Native Hawaiian governing entity.

The measure, formally called the Native Hawaiian Government Reorganization Act of 2010, died in 2010.

By all accounts, Akaka is also remembered for his kind and gentle demeanor. His very warmth was his legacy.

Katherine Scott, who is an associate historian with the Senate Historical Office, said his aloha spirit was on display for anyone who visited his workplace in Washington.

Scott said his wife, Millie, would often go to work with him. She would walk around barefoot and greet constituents as they walked through the door, which Scott said was in stark contrast to the reception one might receive from Dan Inouye. 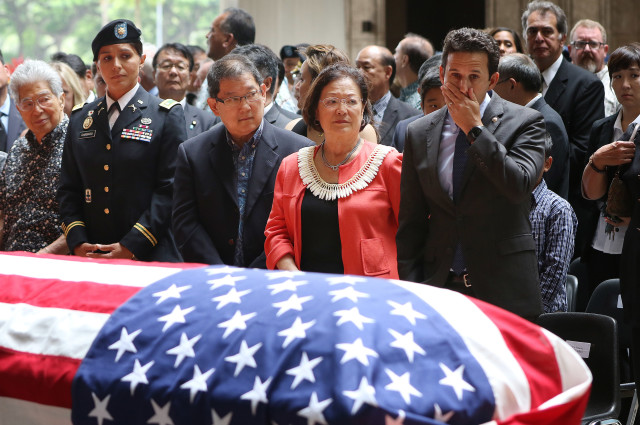 “There was a great deal of difference between the two officers here on the Senate side for the Hawaii delegation,” Scott said. “You had Sen. Akaka, who had a very relaxed atmosphere here in the office. … Sen. Dan Inouye’s office, by contrast, was much more formal.”

“Senator Akaka was an inspiration to so many in our party and all levels of government,” said Tim Vandeveer, Democratic Party of Hawaii chairman. “In Congress, his warmth and generosity earned him respect from members of both sides of the aisle.”

Honolulu Mayor Kirk Caldwell had this to say about the late senator:

Senator Akaka lived a life of love, kindness and aloha. I never heard him utter an unkind comment about a single person. He represented the best of Hawaii and set the highest standard for all of us in terms of human decency, and I will miss his quiet leadership. Our hearts go out to Millie and his entire ohana.

Akaka never achieved the national status of Inouye, who first rose to prominence during the Watergate hearings and later during the Iran-Contra scandal. Inouye, who died in office in 2012, was at one point pro tempore of the Senate, meaning he was third in the presidential line of succession.

“The thing that’s unfortunate about Akaka’s tenure in the Senate is that he had to live in Inouye’s shadow,” said Jennifer Duffy, senior editor of the Cook Political Report.

“But I think that Akaka stayed very, very focused on Hawaii and its needs. And while he didn’t always get the credit, he certainly worked every bit as hard on the issues that affected the state.”

Gov. David Ige has ordered that the U.S. and Hawaii flags be flown at half-staff to honor Akaka.

“Our beloved Sen. Akaka lived a life of service and aloha, and each of us in Hawaii has benefited in countless ways,” said Ige.

“Our state mourns the loss of this man of upright character. While we celebrate his military service and dedication to our nation’s veterans, his advocacy of the Hawaiian language and culture, and his work in Congress to recognize Filipino veterans, he was first and foremost a family man. Dawn and I send our condolences to Auntie Millie and the entire Akaka ʻOhana.

Comments on Twitter regarding the passing of Sen. Akaka:

Daniel K. Akaka was beloved by everyone in Hawaii, and his colleagues of both parties in Washington DC. A pure heart, a determined warrior for native Hawaiians, and a true public servant. We will miss you, Senator Akaka. Aloha.

Senator Akaka truly embodied the aloha spirit & selflessly dedicated his life to serving others. He treated everyone equally, with kindness, respect & love – no matter who they were or how they treated him. He responded always with aloha, sharing his warm smile & embrace w/ all

Hawaii’s heart is broken this morning as we learn of the passing of one of Hawaii’s greatest statesman. Thank you, Senator Akaka, for your legacy of courage and love. You taught Congress and our nation how to fight with dignity and Aloha. We all aspire to lead like you.

Senator Daniel Kahikina Akaka embodied the Aloha Spirit. He dedicated his life to serving the people of Hawaii as an educator, and in the U.S. Army, state government, the U.S. House, and the U.S. Senate. pic.twitter.com/1PiekJ9ur3

In everything he did, as a soldier, a teacher and as a statesman, Senator Daniel Akaka embodied the spirit of Hawaii. For all he taught us, for his service and his friendship, we say “Mahalo” one final time.

Saddened by the passing of my friend & former colleague Daniel Akaka, the first native Hawaiian to serve in the U.S. Senate. He proudly served our nation during World War II & was a forceful advocate for our troops, veterans, & his beloved state of Hawaii. https://t.co/gV3jw2OrrB

The kindest man you could ever meet in the world of politics, former Sen. Daniel Akaka dedicated his life to making Hawaii a better place to live and bringing our values to Washington. Mahalo Senator. You’ll be missed. #AlohaAkaka https://t.co/nR4TmaB6E1 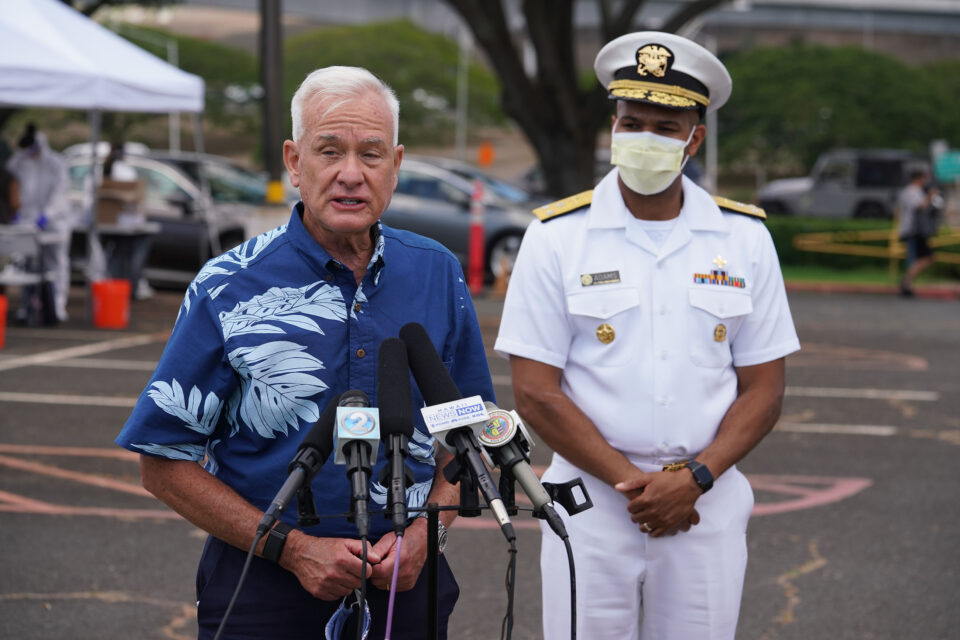