A facility in Iwilei that was announced as a one-stop, walk-in site where homeless people could be screened, tested and quarantined for COVID-19 is not providing screening or testing after all.

Instead, homeless people need to be screened and tested at a medical facility, such as a hospital, and then transported to the city-owned building on Kaaahi Street. There, they can await their test results and quarantine if they’re positive.

While the state Department of Health says it now makes sense to focus more on quarantining because enough testing is done, one of the doctors leading the state’s COVID-19 response said no one is making a systematic attempt to screen and test the homeless, leaving the state vulnerable.

“It was supposed to be the first step to address what is our biggest potential crisis that could clog our beds in the hospital and the intensive care units,” said Scott Miscovich, a doctor who was supposed to help run the facility’s medical care but resigned in frustration. 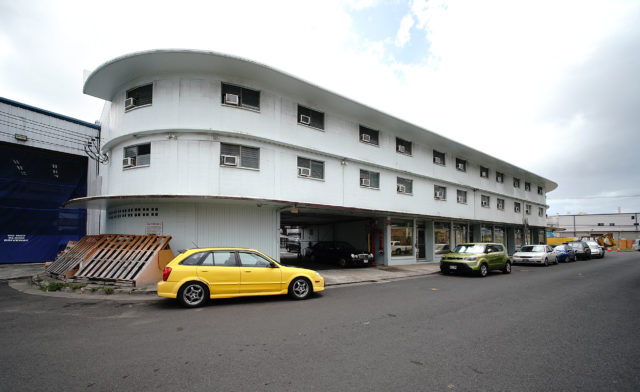 For the first few days of its operation, the so-called homeless “triage” building sat mostly empty.

“With it now not functioning as it was designed, we are very vulnerable in this state with the enormous number of homeless individuals living in overcrowded situations unmonitored by any health officials. I worry about the state of Hawaii.”

The facility, which opened on April 1 as a “medical triage and quarantine center,” had only two clients last week. Two weeks after opening, there were fewer than two dozen people at what is now called the Temporary Quarantine & Isolation Center. The building has the capacity for around 50 people if clients double up in rooms.

There is no widespread COVID-19 screening or testing of homeless people in Hawaii, according to Miscovich and others. The Kaaahi Street program was supposed to help with that.

However, the program’s leaders are now saying the facility can be most helpful by focusing on isolation and quarantine after people have been tested elsewhere.

“We have to understand that things are rapidly changing,” said Christina Wang, the facility’s medical director.

On March 27, city officials said that the nonprofit Miscovich cofounded, Hawaii Homeless Healthcare Hui, would conduct mobile testing of symptomatic members of the homeless population – in encampments and in shelters – and run the medical triage center on Kaaahi Street. Its mobile testing program was estimated to provide 200 screenings and tests per day, and people awaiting test results would isolate at the Kaaahi facility.

H4, which ran an urgent care facility for homeless people in Chinatown, would move its operation to Kaaahi Street, where people could walk in, regardless of their insurance status, the city said.

That’s not how things panned out.

There is now no walk-in clinic for homeless people in either Chinatown or Iwilei, Miscovich said.

Wang, a nurse practitioner with the Hawaii Health & Harm Reduction Center – a clinic that specializes in HIV and hepatitis among other health problems – is now running point at the Kaaahi Street facility.

H4 Director Andy Mounthongdy did not respond to a request for comment.

Asked whether there is mobile testing specifically for homeless encampments, program leaders didn’t give a direct answer. Miscovich said the answer is no.

“We had some glitches,” Marc Alexander, the director of Honolulu’s housing office, said last week. “We’re trying to work that out right now.”

For now, homeless people should be able to access screening with the assistance of their shelters, according to program leaders. If they’re unsheltered, they could be identified and directed to screening by an outreach worker.

According to Scott Morishige, Gov. David Ige’s coordinator on homelessness, outreach workers are being directed to pass out colored index cards. Homeless people who feel well can present the green side on their tent. Those who feel ill can display the red side to attract attention from an outreach worker, he said. 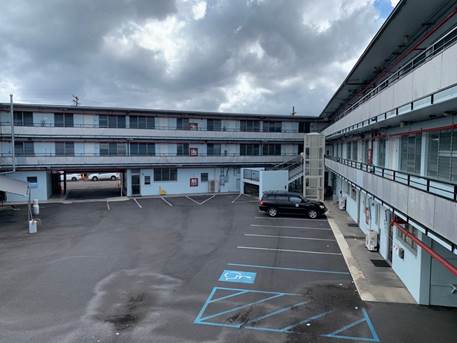 What was described as a “triage facility” is now a place for isolation.

Courtesy of the City and County of Honolulu

At last count, there were over 4,400 homeless people on Oahu, more than half of them unsheltered.

“I thought that space would be full instantly,” Laura Thielen, executive director of Partners In Care, which coordinates Oahu’s homeless services, said of the Kaaahi Street facility. “When we were talking about this a few weeks ago, I really thought there was going to be a line out of the door of people going in and getting testing.”

The general population has had a hard time getting access to testing. Homeless people have added obstacles, Thielen said.

“Transportation is a huge issue,” she said. “If we have folks out there that even want to get tested, but the providers don’t have the (personal protective equipment) or the ability to transport them, then those people aren’t going to get tested.”

Hawaii has not yet announced any confirmed COVID-19 cases among the homeless, but the virus is ripping through homeless populations in other states.

In San Fransisco’s largest homeless shelter, over 90 clients and 10 staffers have the disease in what is likely the country’s largest outbreak in a single shelter, according to The Guardian. In New York City, at least 27 homeless people have died of the coronavirus, ABC News reported. The virus has also spread through a dozen shelters in King County, Washington, according to The Seattle Times.

“Clusters are the most dangerous thing we will be facing in the future across our state,” Miscovich said. “I’m very concerned this virus is already spreading through our homeless shelters.”

Edward Mersereau, deputy director for the Hawaii Department of Health’s behavioral health administration, applauded the Iwilei facility’s potential at the March 27 press conference. But on Tuesday, he gave conflicting explanations for the change of plans.

“I never felt that that was going to be appropriate for that facility,” he said of the walk-in screening and testing concept. “I think that maybe the messaging was misconstrued.”

When pressed, Mersereau said he decided to nix screening and testing in part because of the amount of testing happening elsewhere.

“We determined there was enough testing going on in the community for us not to have to focus too heavily on testing, and that it was better for us to focus on quarantine and isolation,” said Mersereau, who is a licensed clinical social worker.

Plus, having people line up outside the Kaaahi Street facility – which is located near a shelter operated by the Institute for Human Services – would be unsafe, according to Connie Mitchell, IHS’s executive director.

The health department has a specially outfitted van to transport homeless people to the emergency room for testing, Mitchell said. After a phone interview ended abruptly, program leaders did not respond to written follow-up questions, including how many other vehicles are being offered by service providers.

“The emergency room is not the place to send random people for screening and testing,” he said.

Lt. Gov. Josh Green, a doctor who co-founded H4 with Miscovich, said the city and state deserve credit for their effort to establish an isolation and quarantine center. He noted that homeless people can walk up to one of the mass drive-in testing sites.

“I would like to see some mobile outreach, and it will happen over time,” he said. “This is a good start.”

Civil Beat has twice asked the health department for copies of service provider contracts which would outline the scope of services and compensation for the Kaaahi Street program. The DOH has not responded to those requests and isn’t required to because Ige suspended the state’s public records law – a reduction in transparency that was more extreme than actions taken by other governors.

Meanwhile, the state has yet to relieve crowding at congregate shelters with a new space that would allow for social distancing, and officials have announced no plan to meaningfully reduce crowding.

Despite the changes, Wang said the Kaaahi Street facility is providing needed services for people who need a place to isolate and help planning where to go next.

“That’s an absolute success,” she said.

COVID-19 Strain That Originated In Brazil Detected On Oahu