Since the coronavirus crisis hit, Oahu’s visitor count has plummeted. So has the trash that comes with their stay.

The total tons of opala — or garbage — sent to the island’s H-Power waste-to-energy plant has dropped 15% since early March, the city’s Department of Environmental Services reports.

That translates to about 5,000 less tons of trash in the era of COVID-19 so far, department spokesman Markus Owens said in an email.

Residents staying home, restaurants shifting to take-out and other businesses deemed nonessential closing have all contributed to the decrease. However, the biggest factor is the drop in visitor arrivals, city trash officials say. Currently, those arrivals are down from more than 30,000 a day to just several hundred.

“That’s the big one — all of Waikiki has been shut down and all those tourists not generating the extra trash coming in,” Environmental Services Director Lori Kahikina said Friday. 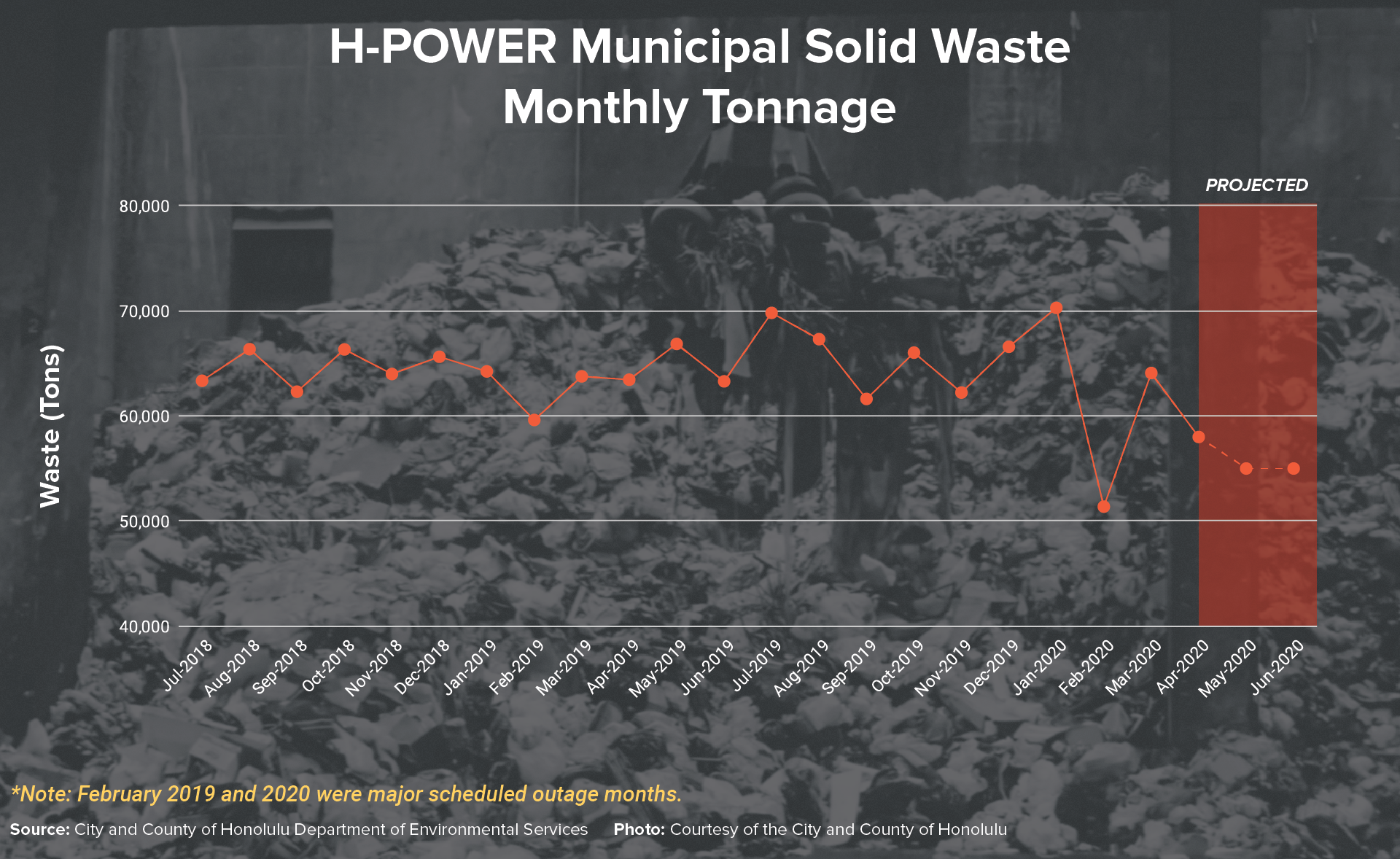 Less garbage generated on a small island generally sounds like a silver lining.

However, the city faces steep financial penalties if it doesn’t send enough trash each year to the H-POWER plant, where the material is burned and converted to electricity.

Under contract, the city must pay H-Power operator Covanta for the company’s lost energy sales whenever the city fails to deliver at least 800,000 tons of trash a year.

From 2013 to 2016 the city paid out $6.2 million to cover the tons it missed and Covanta’s lost electricity revenues, according to a 2017 auditor’s report.

Despite the tonnage lost during the crisis, the city still hopes it can send nearly 750,000 tons this year to H-Power, based on its latest projections.

The city also pays separate annual penalties to Hawaiian Electric Co. when the local utility can’t produce enough electricity from H-Power and it’s the city’s fault. When that occurs, it’s usually for the lack of tonnage, Kahikina said.

Those additional HECO penalties have totaled more than $2.7 million in the past six years, according to figures provided by Owens.

The Covanta contract runs through 2032.

The current situation highlights the flaws in that deal, said Nicole Chatterson, director of Zero Waste Oahu, which advocates for ways to reduce trash on the island.

“It should be, you create less trash and across the board that’s a good thing,” Chatterson said Monday. Instead, the city’s H-Power contract incentivizes trash production and “that’s problematic.”

The city is resisting any such incentives to generate more trash and instead started to promote trash-reduction in recent years, Kahikina said.

“Yes, we have a put or pay contract (with Covanta), and unfortunately we’re stuck,” she said. “But still, reduce or reuse is the right thing to do.”

Kahikina said she doesn’t expect the current dip in tonnage to last post-shutdown.

“I don’t think we’re changing people’s habits. People are still generating trash,” Kahikina said. “Their mindset hasn’t changed to reduce and reuse. It’s just businesses have shut down and tourists aren’t here, so that’s why the tonnage is going down.”

“I think it points to what’s possible. The waste that each visitor is generating — it demonstrates that we can do something about that,” she said.

When the pandemic ends and visitors return, more of them could be offered reusable to-go boxes instead of multiple styrofoam plate-lunch boxes, enabling them “to come and do the right thing instead of setting them up to fail.”

In the meantime, the city will continue to push reduction in waste in ways that could cost taxpayer dollars in the Covanta deal.

“The city is being penalized, but we’re doing the right thing,” Chatterson said. “That doesn’t feel great.”

How A Powerful Lawmaker Forced Through A Contentious Energy Bill

Catherine Toth Fox: We Have To Find A Way To Keep Our Kids Safe At School

More Hawaii Schools Are Using Dogs To Sniff Out Covid

The Coronavirus Pandemic Caused An Uptick In Eating Disorders