Federal prosecutors paraded a series of current and former police officers into U.S. District Court on Friday to testify against their former chief, Louis Kealoha, and his wife, Katherine, a former city prosecutor.

The Kealohas are accused of framing her uncle for the theft of their mailbox in June 2013 to undermine him in a civil lawsuit he filed against Katherine.

According to the U.S. Justice Department, they enlisted the help of several officers from the Honolulu Police Department’s Criminal Intelligence Unit to carry out the set-up. 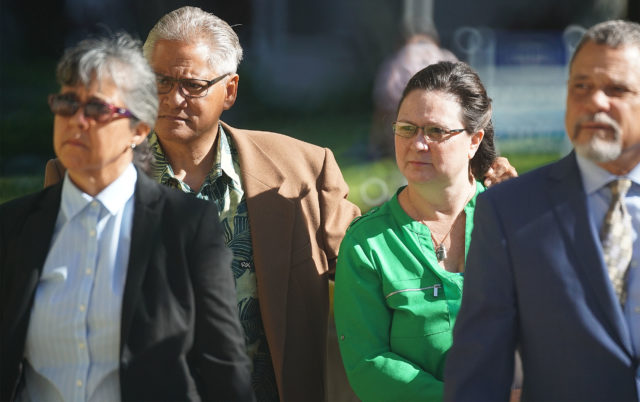 Louis and Katherine Kealoha arrive at District Court on Friday with their attorneys, Cynthia Kagiwada, left, and Rustam Barbee, right.

Three of those officers, Derek Hahn, Minh-Hung “Bobby” Nguyen and Gordon Shiraishi, are also on trial with the Kealohas. Two others have already pleaded guilty.

Among the witnesses to testify Friday were the officer who arrested Gerard Puana for the mailbox theft, the president of the state police union and two officers who spent days following Puana before he was officially named a suspect in the mailbox theft.

‘Its Ur Pain In The Okele’

The last witness of the day was John McCarthy, who was appointed deputy police chief after Susan Ballard succeeded Louis Kealoha as chief.

McCarthy said Katherine Kealoha came to HPD headquarters two days after her mailbox was allegedly stolen on June 21, 2013, to tell him she believed Puana was taking advantage of his mother, Florence Puana, who is Katherine’s grandmother.

The conversation was preceded by a text message from Kealoha:

“Its ur pain in the okole-kat kealoha! Help! Can I please make an appointment?”

At the time, McCarthy was the head of the white collar crime division at HPD. He said Kealoha approached him with a box filled with financial documents that she said would prove the case against her uncle. 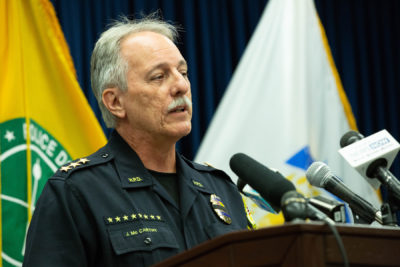 Deputy Chief John McCarthy holds a press conference last year. He testified Friday about an encounter he had with Katherine Kealoha after the alleged theft of her mailbox.

But when McCarthy started thumbing through the pages he said he noticed Kealoha’s name was on almost all of the bank statements and that she appeared to be spending her grandmother’s money on herself.

“She was very nervous,” McCarthy said. “She was speaking very fast, very choppy.”

After about 15 to 20 minutes, McCarthy said he told Kealoha he would need to get the original versions of financial documents she provided to pursue a legitimate investigation. He also noted that he would need a complainant, such as Florence Puana, to come forward.

“That sort of ended the whole conversation,” McCarthy said.

He said he tried following up with Kealoha several weeks later and she told him that she wanted to drop the case.

By that time, Gerard Puana had been charged with stealing the Kealohas’ mailbox, a fact McCarthy said he was vaguely aware of. He said he also knew that Puana was involved in a lawsuit with Katherine, who told him her husband was upset about the whole situation.

“He said that if he lost the civil suit he would shove any money up Gerard’s ass,” McCarthy said.

‘It Was Rumored It Was Me’

Nalei Sooto, a former Honolulu officer, testified that he had twice been shown grainy, black-and-white surveillance video of a man stealing Louis and Katherine Kealoha’s mailbox from in front of their Kahala home.

The first time was just days before he arrested Puana in a church parking lot for allegedly taking the mailbox.

The second came years later while he was working in harbor patrol in Seattle. An FBI agent asked him if the man seen plucking the mailbox from its post was Sooto himself.

“The agent said it was rumored it was me,” Sooto said. “But by viewing the video it obviously was not me.” 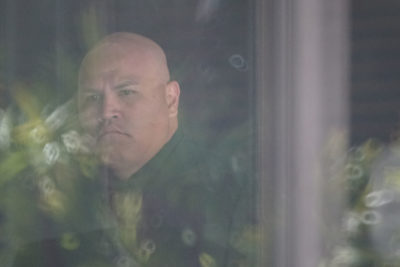 When pressed by a defense lawyer later, Sooto said, the agent might have asked the question jokingly.

Assistant U.S. Attorney Michael Wheat questioned Sooto about his involvement in the mailbox investigation. He said he was first contacted by his boss, Sgt. Michael Cusumano, on June 25, 2013, four days after the theft to review the surveillance video.

Cusumano, who was a surfing buddy of Louis Kealoha, sent Sooto to the chief’s house where he said he and his partner, Vance Leong, met with Nguyen.

At the time, Sooto was assigned to an HPD Crime Reduction Unit in Waikiki that focused on combating street level crimes. He said it wasn’t out of the ordinary for colleagues to call in members of a CRU unit to watch surveillance video to see if they recognized any faces.

What was odd, he said, was that he was called to the chief’s house, a place he said he’d never been before. When he watched the video he wasn’t much help.

“Were you able to identify that person?” Wheat asked.

Sooto eventually arrested Gerard Puana on June 29, 2013, minutes after Katherine Kealoha identified the man in the video as her uncle during an interview with a homicide detective who was also assigned to the case.

Sooto said he made the arrest based on a photo that was given to him of Puana.

‘It Just Didn’t Resemble Him’

Malcolm Lutu, president of the State of Hawaii Organization of Police Officers, testified about his friendship with Puana and his time in the Criminal Intelligence Unit. 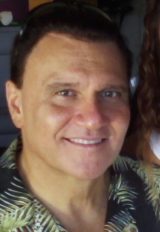 Lutu, who’s been an HPD officer for 30 years, said he was a member of the CIU from 2010 to 2017, which meant he was assigned to the unit when the mailbox theft was being investigated.

Lutu was not a part of the team leading the investigation, but he did have the opportunity to watch the surveillance video. He had a personal connection to the case in that he was a friend of Puana.

He said they used to lift weights together in the mid-1980s at a Pearl City gym called the Power Pit. Both Lutu and Puana were competitive power lifters.

That’s why when Lutu first watched the surveillance video he was perplexed. The man looked younger than Puana, who was in his 50s at the time of the alleged theft. He noted that the man in the video also had a thin neck, something the powerlifting Puana wasn’t known for.

When the defense had a chance to cross examine Lutu, Nguyen’s attorney, Randy Hironaka, asked why Lutu never raised his concerns with his colleagues in CIU or with federal investigators.

“I was under the impression that the ID was made and it was already going through so I didn’t say anything,” Lutu said.

Records In A ‘Burn Pile’

The prosecution called several other officers throughout the day, including current and former members of the Criminal Intelligence Unit.

Among them was David Chang, who said that he was assigned to the CIU in January 2018 when the FBI asked him to search for any records related to the mailbox investigation that focused on Puana.

Chang testified that he found those records in a “burn pile” within the CIU offices. The burn pile consisted of  boxes of documents that HPD wanted to destroy securely. 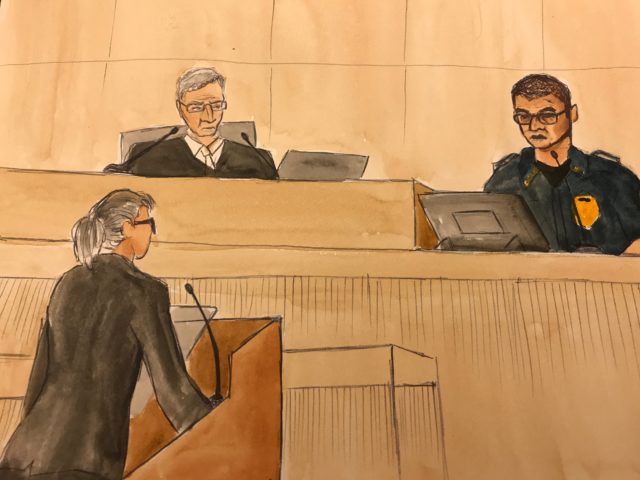 Among the documents Chang discovered were vehicle reports that were run on Puana on June 22, 2013, one day after the alleged mailbox theft and seven days before Katherine Kealoha officially identified him as the suspect.

Two other officers who were members of the CIU, Landon Tafaoa and Sean Asato, testified about doing 24-hour surveillance on Puana from almost immediately after the Kealohas’ mailbox was allegedly stolen to when he was arrested.

Tafaoa said the officers didn’t have constant eyes on Puana, but that he appeared to be “conducting himself like a regular citizen.”

“Did you ever see him commit any crime?” Wheat asked.

“Did you ever hear from anyone else that he committed a crime?” Wheat asked.

Tafaoa said that Puana eventually figured out that he was being followed and called 911 to make a “suspicious activity” report. Puana even pointed his camera phone at Tafaoa when he was trying to conduct surreptitious surveillance.

Asato testified about CIU’s practice of not writing police reports. He said most information was communicated via word of mouth and that anything that was written usually went into a database.

Wheat asked if that database contained any reference to Puana, given the amount of CIU resources assigned to tailing him.

Asato told him no.

“Why is everything verbal?” Wheat asked.

“That’s just how we did it at the time,” Asato said.

The trial is scheduled to resume Tuesday after the Memorial Day weekend.

For the past several months our nonprofit newsroom has worked beyond our normal capacity to provide accurate information, push for accountability, amplify smart ideas and new voices, and double down on facts and context to write deeply reported local stories.