Some of the last words jurors were left with before a week-long hiatus in the criminal trial of Louis and Kathrine Kealoha came from Minh-Hung “Bobby” Nguyen:

Prosecutors played audio clips Friday of Nguyen’s May 19, 2016, testimony before a federal grand jury when it was investigating whether he, the Kealohas and other Honolulu police officers framed Katherine Kealoha’s uncle, Gerard Puana, for the theft of her mailbox in 2013.

That testimony included several versions of “I can’t recall.” 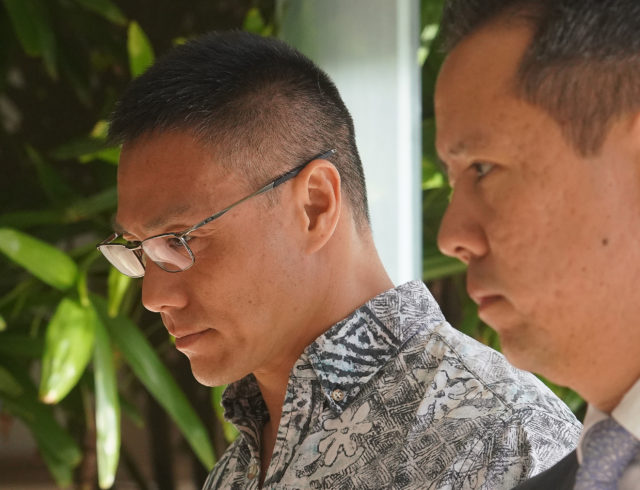 Minh Hung “Bobby” Nguyen is one of three Honolulu police officers who are defendants in the mailbox conspiracy trial.

At the time, Nguyen was a member of the Honolulu Police Department’s secretive Criminal Intelligence Unit, and his boss, Louis Kealoha, was the police chief. Katherine Kealoha was one of the top-ranking city prosecutors.

In the clips, Nguyen was questioned by Assistant U.S. Attorney Michael Wheat about key dates in the alleged conspiracy to frame Puana, as well as Nguyen’s recollections of phone calls and text messages he sent to those who have been accused of carrying out the crime.

Wheat in particular focused on Nguyen’s interactions with Niall Silva, a retired Honolulu police officer who pleaded guilty in December 2016 to taking part in the mailbox conspiracy.

Silva admitted he lied on the witness stand during Puana’s criminal trial on Dec. 4, 2014, about his involvement in the investigation. Silva testified then that he was the person who went to the Kealohas’ house June 22, 2013 — the day after the alleged mailbox theft — to recover a hard drive of surveillance footage when he had not done so.

It was actually Nguyen who brought the hard drive to Silva at HPD and it was Nguyen who identified Gerard Puana as being the man in the video taking the mailbox.

“Is there a reason that Mr. Puana was not arrested at that stage?” Wheat asked.

“I would not know,” Nguyen said. “I don’t know how to answer that question for you, sir.”

Wheat told Nguyen he had evidence of his cell phone communications with Silva, and that it appeared to show the two of them only communicated on dates that aligned with key events in the alleged mailbox conspiracy.

For instance, Nguyen and Silva exchanged several messages on Dec. 4, 2014, the day of Puana’s criminal trial, when Silva says he lied on Nguyen’s behalf.

Wheat pointed out they also exchanged a series of phone calls after the FBI contacted Nguyen for an interview in November 2015.

“Why were you having all of this contact before the trial, before the FBI interview, before the evidence was put in,” Wheat said. “What is your relationship with Niall Silva?”

In most cases, Nguyen said he couldn’t recall specific conversations he had with Silva or what any of his text message exchanges were about. He also couldn’t say why he was staying in touch with Silva even though he was retired from HPD.

“You don’t have any independent recollection of what it was you talked about?” Wheat asked

“Would you agree you had a lot of contact with Mr. Silva?” Wheat asked.

“Sure, if your records show that,” Nguyen responded. 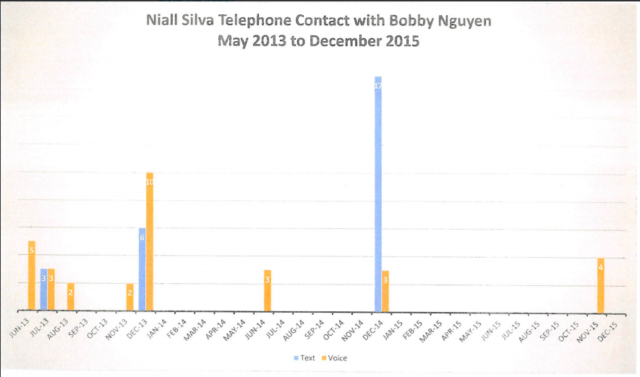 The deposition was part of a state civil case in which Gerard Puana and his mother, Florence, accused Kealoha of swindling them out of hundreds of thousands of dollars via shady investments and a reverse mortgage scheme.

Prosecutors have said the lawsuit was a key factor in the motive to frame Gerard Puana because it threatened to uncover Kealoha’s alleged criminal activity.

Nguyen admitted to Wheat he was at the building where the deposition took place and that he spoke to the Puanas while they were in the lobby, but said he couldn’t remember much of what he discussed with Gerard Puana beyond an exchange of pleasantries.

“You didn’t tell him why you were there?” Wheat asked.

“No, that’s not his business, it’s police work,” Nguyen said. “I’m not supposed to divulge what I do.”

Nguyen said he was waiting in the lobby to get out of the sun and take advantage of the air conditioning. It was a different version of events than what the jury heard Thursday when they listened to a statement he gave to Honolulu Ethics Commission investigators.

In that interview, Nguyen said he went to the building with his partner, whose mother worked inside. Nguyen, however, could not remember the name of that partner.

During the grand jury proceeding, Wheat revealed that he had evidence that Nguyen was texting with Katherine Kealoha while she participating in the deposition.

“What was the nature of those text messages,” Wheat asked.

Nguyen was similarly vague when asked about his conversations with Florence Puana that day, someone he was related to by marriage and who he called “Nana.”

Florence Puana, however, testified she remembered exactly what they talked about.

In her own testimony during the criminal trial — which came via video deposition due to the fact she’s 99 and in poor health — Puana said Nguyen asked her what color car her son drove. She said she mistakenly told him it was white when in fact it was actually silver.

The vehicle used two days later to carry out the mailbox theft was white.

Among witnesses who testified Friday was Gerald Kurashima, who was the Puanas’ civil attorney in their lawsuit against Katherine Kealoha.

Kurashima discussed the peculiarities he uncovered in the case, from Kealoha’s spending her grandmother’s money to pick up a nearly $25,000 brunch tab to the discovery of a trust document signed by a notary named Alison Lee Wong.

There’s no record such a person exists in Hawaii as a notary, and prosecutors have continued to show evidence that Wong is a fake person created by Kealoha.

The Puanas ultimately lost the lawsuit in 2015 and a jury awarded Kealoha more than $658,000 in damages, although an appeal is pending.

“And was she successful in that,” McDonald asked.

The trial is set to resume June 17. Wheat told Judge J. Michael Seabright he only has a handful of witnesses left and that he expects to wrap up the prosecution’s case in a day or two.

Attorneys for the defendants estimated they would only need about a week to present their case to the jury.

Our small newsroom believes wholeheartedly that news and information is a public service – not something to be hidden behind paywalls or diluted by ads. Your donations ensure that our reporting remains free and accessible to all communities, regardless of a person’s ability to pay. Support independent, fact-based, nonprofit news by making a tax-deductible gift. We rely on your support.

HART Grapples With Lessons Learned From West Side Rail Construction

Sterling Higa: How Whole Foods Lured Me In

Tom Yamachika: The ‘Flipping Surcharge’ And Other Housing Solutions