To comprehend the verdict against Louis and Katherine Kealoha and their three alleged co-conspirators it’s important to understand what federal prosecutors told the jurors shortly before asking them to declare their decision.

Once the jury decided that the Kealohas and two of their co-defendants, Derek Hahn and Minh-Hung “Bobby” Nguyen, were guilty of conspiracy that allowed the jurors to attach guilt to all of them even if individually they weren’t involved in a specific criminal act.

That’s why when Louis Kealoha was found guilty Thursday for giving false testimony during a federal trial in 2014 of his wife, Hahn and Nguyen were also found guilty.

It also explains why the Kealohas, Nguyen and Hahn were found not guilty on other charges that related specifically to Gordon Shiraishi. He wasn’t found to be part of the conspiracy.

Here’s your guide to the charges: 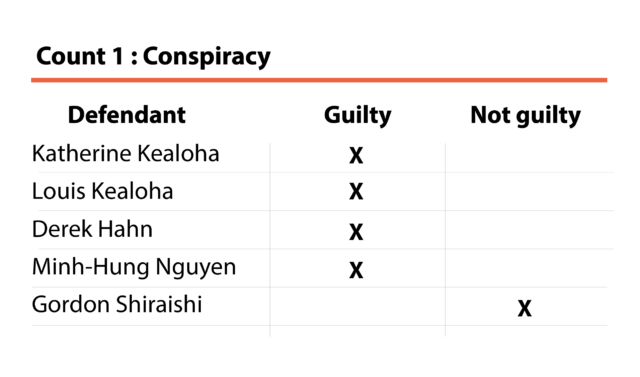 At its core this case was about Louis Kealoha, a retired Honolulu police chief and his wife, Katherine, a well-connected city prosecutor, framing her uncle, Gerard Puana, for the theft of their mailbox on June 21, 2013.

According to the government, the Kealohas abused their power to enlist the help of several police officers — most of them tied to a covert intelligence unit — to help carry out the crime.

On Thursday, a jury found the Kealohas and two Honolulu police officers, Derek Hahn and Minh-Hung “Bobby” Nguyen, guilty of conspiracy, a charge that carries a maximum sentence of five years in prison and $250,000 fine.

Evidence presented at trial showed that Hahn and Nguyen played integral roles in the set-up and subsequent cover-up, from generating false police reports and conducting illegal searches of Puana’s home to lying to federal investigators. 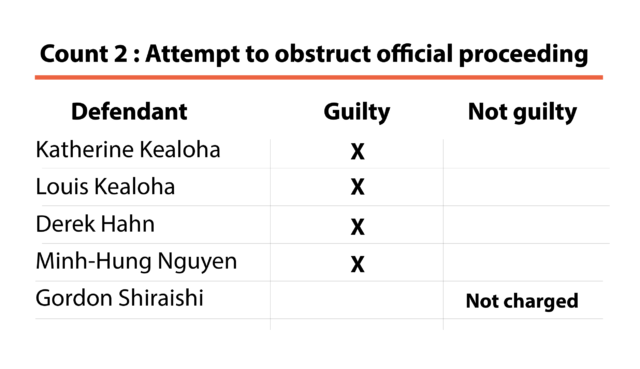 This charge focuses on the actions of Louis Kealoha, but loops in the other defendants based on “Pinkerton liability,” which essentially means one person’s criminal actions can be applied to other people involved in the same conspiracy.

On Dec. 4, 2014, Gerard Puana was on trial in U.S. District Court for the destruction of the Kealohas’ mailbox, a crime that carried a maximum penalty of three years in prison.

Keep track of the trial and its aftermath with Civil Beat’s guide to the case.

Louis Kealoha, who was then the chief of the Honolulu Police Department, was called to the witness stand to testify about the alleged crime, which was caught on surveillance video.

Kelaoha lied and said the man in the baseball cap and cargo shorts stealing his mailbox was his wife’s uncle, Gerard Puana. He later caused a mistrial by inappropriately revealing details about a prior run-in Puana had with HPD in 2011.

Attempting to obstruct of an official proceeding carries a maximum sentence of up to 20 years in prison and a $250,000 fine. 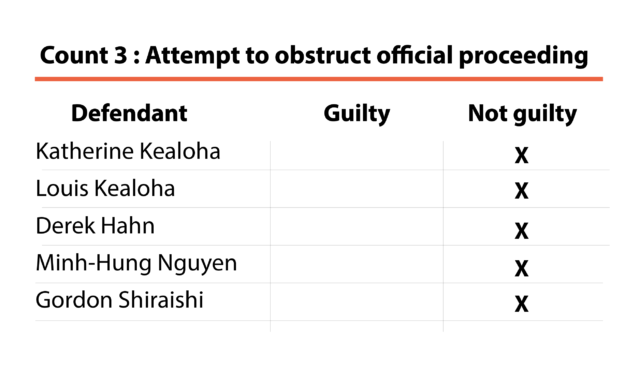 The grand jury investigation, which was being led by Assistant U.S. Attorney Michael Wheat, of San Diego, focused on whether the Kealohas had framed Puana for the theft of their mailbox.

Shiraishi was the head of HPD’s Criminal Intelligence Unit on June 21, 2013, the day the mailbox was stolen.

He told the grand jury that around 9 a.m. on June 22, 2013 he received a phone call from then-Chief Louis Kealoha about the alleged theft. He said he then directed Hahn to send a CIU technician to the Kealoha residence to recover the hard drive from the surveillance system.

According to the government, that phone call never occurred. Shiraishi, prosecutors said, was just trying to fill in a gap in the timeline.

Police records showed Katherine Kealoha didn’t call 911 to report the mailbox theft until 1:30 p.m. on June 22, 2013, but a CIU technician said he had already been to the house many hours prior to pick up the surveillance video.

That technician, Niall Silva, pleaded guilty to conspiracy in December 2016.

Shiraishi’s defense lawyer, Lars Isaacson, argued during his closing arguments that when his client made his statements he simply misspoke and misremembered the version of events.

Shiraishi was found not guilty, which meant none of the other defendants implicated in the conspiracy could be found guilty. 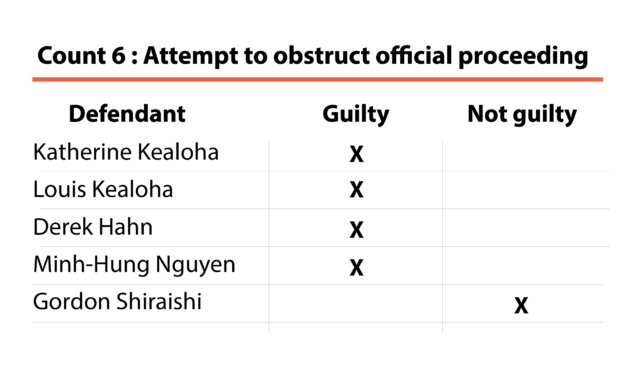 Federal investigators charged Minh-Hung “Bobby” Nguyen for lying to a grand jury on April 21, 2016 about what happened the day after the mailbox was stolen.

He gave false testimony that he was with CIU technician Niall Silva at the Kealoha residence the morning of June 22, 2013 when Silva came to pick up the hard drive containing video of the suspected mailbox theft.

The problem is Silva admitted he was never at the Kealoha residence.

He said Hahn told him to lie about being the one to pick up the surveillance video so as to distance Nguyen from the investigation. Silva said Hahn and Nguyen told him it would not “look good” if Nguyen was involved because he was married to Katherine Kealoha’s niece.

Nguyen also falsely claimed that Gerard Puana was the man on the video stealing the Kealohas’ mailbox. 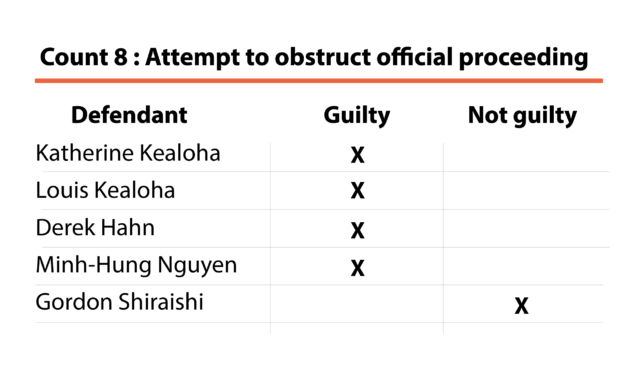 Nguyen was charged again with obstruction for giving misleading testimony to a federal grand jury on May 19, 2016.

He told the grand jury he couldn’t recall communicating with Silva regarding false information they were providing to the U.S. Postal Inspection Service as it investigated Puana for the theft of the Kealoha mailbox.

Phone records showed, however, that the two exchanged numerous messages and phone calls.

Those records also showed a spike in communication between the two during Puana’s December 2014 criminal trial in which Silva lied on the witness stand about his involvement in the investigation. 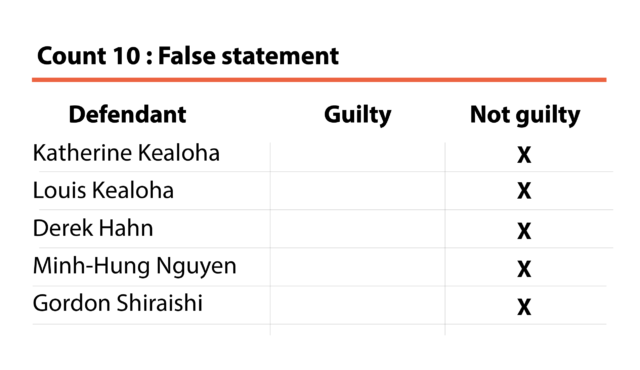 Again, the prosecution said the purpose of the lie was to cover for the chief, who was a close friend of Shiraishi. They were in the same HPD recruit class together and even lifted weights with one another based on evidence presented at the trial.

In addition to Shiraishi’s phone records showing he never made such a call, federal prosecutors said he told an inconsistent story.

At one point he said he knew the phone call occurred in the morning because he was outside watering his lawn. Prosecutors showed he was actually participating in a golf tournament.

Lee Cataluna: Treating COVID-19 Vaccines As A Group Project Is A Bad Idea