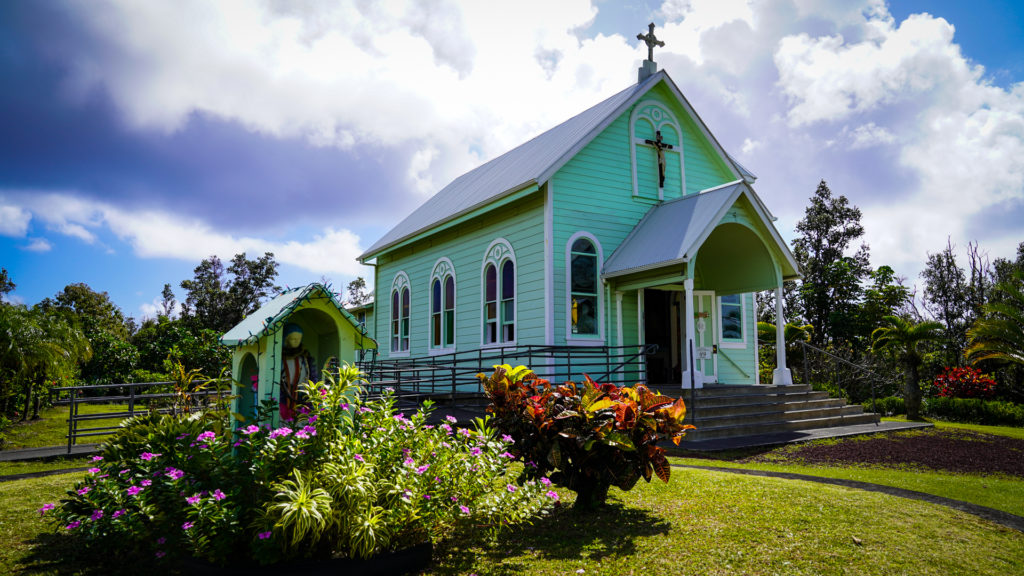 Lava took a heavy toll on this Big Island congregation and almost destroyed the church. Now the problem is how to pay for its upkeep.

PAHOA, Hawaii Island — Star of the Sea, the so-called painted church on the east side of this island, is a destination for thousands of visitors a year. The devout and the godless all come to contemplate the art covering the historic Catholic Church’s interior.

It’s not that the paintings on the ceiling and walls are so superb. It’s more the effect they have when you walk into the small, plebeian church and instantly become submerged in a capsule of rich color.

Belgian missionary priest Father Evarist Gielen built the church in 1930 from scrap wood. Mixing house paint and linseed oil, he painted an array of biblical scenes on Star of the Sea’s ceiling and walls — a massive and moody nativity mural; a guardian angel suspended over children in a garden; Saint Cecilia, patron of musicians, surrounded by rosy cherubs.

Gielen illustrated the Virgin Mary holding baby Christ in her arms, a rudimentary copy of Raphael’s 1512 masterpiece “The Sistine Madonna.” Four flying angels hover above the altar and, on the ceiling, there’s a scene from the death of Ahab, king of Israel.

Working at night by the light of a lantern, it took the priest four and a half months to cover the church interior with an appliqué of bright tonal brushwork.

With his paintings, Gielen sought to instruct and inspire his congregants, many of whom were illiterate. The artwork served as a powerful vehicle for the transmission of biblical teachings. It opened many Hawaiian minds to a world of beauty and faith.

Connecting Communities
“Fault Lines” is a special project that throughout the coming year will explore discord in Hawaii and what we as a community can do to bridge some of the social and political gaps that are developing. Need help with a community project? Send us your event information and we’ll post it here.

Two other artists — the drifter George Heidler in the mid-1960s and Hilo painter George Lorch in the late 1970s — added their own frescoes to the walls. These contributions include the Stations of the Cross and portraits of Father Damien, who spent eight years ministering to the people of the Big Island before he  volunteered to serve as a priest to Hansen’s disease patients quarantined on Molokai.

Prayers and biblical text, hand-written in Hawaiian, accompany some of these later works.

So in 1990, when the church looked to be directly in the path of the eruption from the Kilauea volcano that threatened to set it on fire, many congregants couldn’t fathom losing their house of worship embellished with the unique hand-painted art. They fastened the wooden building to a trailer and carefully moved it a half-mile mauka.

A rainbow appeared in the sky as the church was being lowered to earth. Yet despite this good omen, the Honolulu Diocese of the Catholic Church decommissioned the church. Church officials could not secure a parcel of land to serve as its permanent home. The church was left on the side of the road.

Former congregants also lost their homes to the disaster. They scattered across Hawaii, and many moved to the mainland, as lava erased their simple seaside village. From afar they donated money to keep Star of the Sea’s doors open to visitors who marveled at the church’s adaptations of European masterpieces.

Today the church stands off of Highway 130 in Pahoa. But its future is again uncertain.

The church has been threatened many times, not only by lava but by vandals and thieves who’ve shattered its stained glass windows and pilfered its furniture and artifacts. But the community has always saved it.

Most recently it’s a pair of noni farmers who’ve taken the church under their care. But the farmers say there’s not nearly enough money coming into the donation box to prevent Star of the Sea’s immersive murals from deteriorating. Despite its inclusion on the National Register of Historic Places, the church has yet to attract a more formal or robust group to shepherd its preservation.

The Pahoa community hasn’t given up on the church yet. Mass is still celebrated here on a volunteer basis on the first Friday of every month by Rev. John Molina of Sacred Heart Church in Pahoa.

At a recent mass, 34 people filled the pews reciting, “E Hō Mai,” the Hawaiian wisdom chant, with feeling and force.

“Do you see how joyful they are?” remarked Molina, his voice a sunny alto.

Even when attendance dwindles to a handful of congregants, Molina said his role in keeping the church alive in prayer is meaningful.

“They are here. Otherwise, if they were not here, I wouldn’t be coming,” Molina said. “But since they are here, why curtail the devotion of the people?”

Meanwhile, the paintings on the walls fade and peel without much chance for restoration.

Take a virtual tour of the Star of the Sea painted church by dragging your cursor around the 360 image. Click the icons to get a closer look at the artwork and its history. Please allow a moment to load. Click for full screen.

Over the past 30 years, the church has survived under the care of local families who have kept it going despite the lack of support from the diocese or other official sources.

In 1990, in the face of encroaching lava, a group of 45 families who called themselves the Kalapana Ohana Association took ownership of it. They paid modest annual dues to pay for the building’s basic maintenance. Members sponsored the purchase of new pews and worship songbooks. They dressed the entrance door with a wreath shipped in from the mainland.

In 1996, the families moved the church a second time to its current location off of Highway 130. A state land lease helped the church gain inclusion on the National Register of Historic Places.

Then somebody in the group took off with the church’s money. The Kalapana Ohana Association fell apart. The church doors abruptly shut.

In 2005, noni farmer Roseanna Kanoa started cutting the lawn. She had no connection to the church, other than its proximity to her 25-acre noni, lilikoi and guava farm. She just couldn’t stand to watch the jungle encroaching on the former house of worship.

“I’m a Catholic and that is a Catholic church,” Kanoa, who is 71, said matter-of-factly. “It wasn’t being taken care of anymore. It’s outside my front door.”

Kanoa recruited a set of helping hands from her employee Pancho Aldana, who put in the legwork to obtain the church key. But he said no one could produce the church’s financial records.

Without knowledge of what was in the church coffers or how to access it, Kanoa fronted about $3,000 for fire and liability insurance, which she said was required to reopen the church to the public. She also paid the land lease, property tax, water and electricity bills and fees for a portable toilet service.

With proceeds collected in the church donation box, the farmer slowly paid herself back.

One day Aldana asked a local lumber supplier if they’d be willing to donate wood to replace the church’s rotted flooring. According to Aldana, the owner said his company had already donated lumber to the church for a new floor a few years prior.

When he solicited another local business for roofing materials, he said he got the same response: The business had already donated a new roof to the church.

Aldana did some detective work and found the new roof — on somebody else’s house.

‘Bound To Be Erased’

In the last two years the fruit farmers have spent much of the church’s incoming donation money on a new roof and flooring, as well as a fresh exterior coat of sea-foam-green paint. They also recruited a caretaker to live on the church grounds to keep thieves and vandals away.

The caretaker lives beside the parking lot in a 20-foot shipping container. In exchange for free rent, she keeps prayerful vigilance over the property. She cleans the church, pitches in with the landscaping and opens the church doors at 9 a.m. daily.

The partnership works. But the farmers lament a dearth in broader community support for the church. They say they are frustrated that more people don’t pitch in to preserve it, especially those who make graduation lei with plumeria blossoms growing on the property or cook pig in the backyard imu.

Sometimes those who do offer to help expect something back in return, Aldana said.

Take the a guy who agreed to repaint the angel statues on the front lawn, for example. Aldana said he was clear: The church doesn’t have the funds to pay for the labor. Aldana said the man understood and agreed to do the work anyway as a charitable gift.

But when the guy finished the work, he handed Aldana his receipts for paint, brushes, gas and a McDonald’s coffee.

“I went in and got my wallet and I gave him the money,” Aldana said.

The farmers have incrementally increased the church’s coffers.

Kanoa secured a financial pledge from a bus tour company that brings in tourists to marvel at the painted church, one of only three churches in Hawaii with interior walls flush with biblical murals.

When he travels home to Mexico, Aldana buys cheap rosary beads and gives them to church visitors with hopes they’ll donate a few dollars.

But what the church really needs, the farmers say, is a skilled craftsman to restore the interior paintings that made this structure so worthy of saving in the first place. Minimal donations the church receives from visitors are short of covering the cost of such tedious labor.

During the first week in February, Molina was giving his monthly sermon and fat water drops leapt inside the church through open stained glass windows, wetting the walls and dissolving their colors.

“I always tell those who come here, ‘Take pictures now,’” Molina said. “Because unfortunately the artwork is bound to be erased.”