After over a week of sorting through more than 400 potential jurors to seat a panel of 12, opening statements were finally being made by attorneys Wednesday in the criminal trial of Louis and Katherine Kealoha.

The former Honolulu police chief and his wife, a former city prosecutor, are facing a slew of federal felony charges for allegedly framing the wife’s uncle, Gerard Puana, for a 2013 mailbox theft.

Joining them at the defendants’ table were three current and former cops who allegedly helped them in the scheme, Derek Hahn, Minh-Hung “Bobby” Nguyen and Gordon Shiraishi. 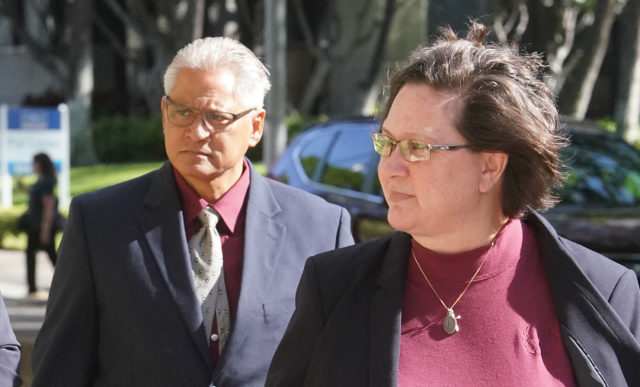 Louis and Katherine Kealoha arrive at District Court on Wednesday for the beginning of their trial.

Assistant U.S. Attorney Michael Wheat, who was the special prosecutor leading the Justice Department investigation into the Kealohas, spent more than an hour telling jurors of the circumstances leading up to the alleged frame job and the alleged cover-up that occurred afterward.

For those who have been following the case from the beginning it was a familiar tale, one that began with a family dispute over money.

“This story neither begins or ends with a mailbox,” Wheat said. “It’s a long story of abuse of position, abuse of trust, manipulation and greed.”

Rustam Barbee, who represents Louis Kealoha, called the prosecution’s argument a “conspiracy theory” that requires “leaps of faith from a certain fact to another fact, connecting the empty space in between.”

He pointed out that the federal investigation still could not produce the identity of who stole the mailbox, if not Puana, nor who was driving the light-colored car seen in a surveillance video.

Katherine Kealoha’s attorney, Cynthia Kagiwada, said in her opening statement that Hawaii is a small community with entangled relationships. The mere fact that Kealoha had relationships with her co-defendants is not sufficient evidence of a conspiracy, Kagiwada said.

“Many of these people before you had more than one relationship with each other,” Kagiwada told jurors, referring to the defendants.

The attorneys for the three Criminal Intelligence Unit officers all said their clients were in the position of taking orders, not giving them, but without implying that their former boss and his wife are guilty.

The federal investigation has reached far beyond the mailbox conspiracy, and the Kealohas will face a second trial later on charges of bank fraud, identity theft and the alleged victimization of two children who lost their inheritance left behind by their deceased father to Katherine Kealoha.

Two Honolulu police officers have already pleaded guilty to criminal charges, as has a Big Island firefighter who admitted he lied to investigators about his affair with Katherine Kealoha.

Katherine Kealoha also faces charges related to allegations she and her younger brother, Rudolph Puana, ran a prescription drug ring and that Kealoha used her position as a city prosecutor to keep it hidden.

This is a developing story. Watch Civil Beat for updates.

For the past several months our nonprofit newsroom has worked beyond our normal capacity to provide accurate information, push for accountability, amplify smart ideas and new voices, and double down on facts and context to write deeply reported local stories.