Kealoha Trial Resumes: Now You Can See What The Jury's Been Looking At - Honolulu Civil Beat

It’s been almost a month since opening statements in the federal trial of Louis and Katherine Kealoha, the former police chief and deputy prosecutor accused of framing her uncle for the theft of their mailbox.

Dozens of witnesses have testified in U.S. District Court and hundreds of pages of evidence have been entered into the official record.

On Monday, the case continues after a weeklong hiatus with prosecutors continuing to try to prove that the Kealohas and three co-defendants — all of them police officers — conspired to set up Gerard Puana for a crime he didn’t commit.

The prosecution is expected to rest its case in a day or two. Then the five defense attorneys will take center stage.

But before another witness takes the stand, here’s a deeper look at some of the exhibits and testimony that slipped through the daily news coverage, from an engineer’s physical analysis of the Kealoha mailbox to an awkward email exchange between a security guard and a woman the government says doesn’t exist.

You don’t have to be tracking gavel-to-gavel coverage to know that one of the main characters in the Kealoha trial isn’t a person.

It’s a mailbox. More specifically the mailbox the Kealohas said was stolen from their home on June 21, 2013 by Katherine’s uncle, Gerard Puana.

Jurors have heard a lot of testimony from witnesses saying the guy in the video doesn’t look like Puana. But they’ve also heard a lot about the mailbox itself. Here’s a picture of it in front of the Kealohas’ home before it was taken: 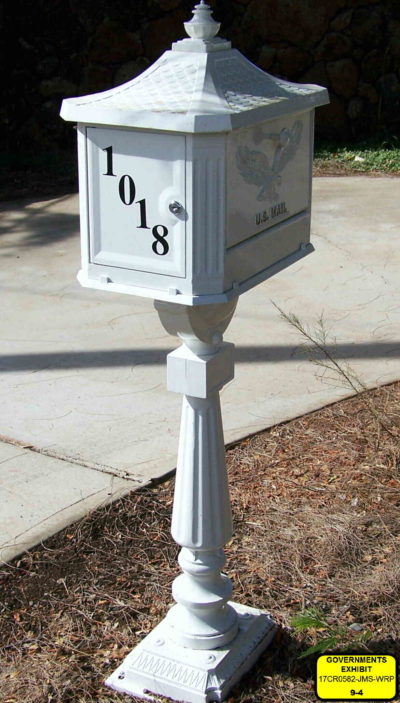 The mailbox is a Gibraltar brand with a large eagle emblazoned on the side. It had an estimated value in 2013 of about $150.

When Katherine Kealoha reported the mailbox missing, however, she said it was a Gaines brand mailbox with nickel-plating that was worth $380. Here’s the handwritten description she gave one of the officers: 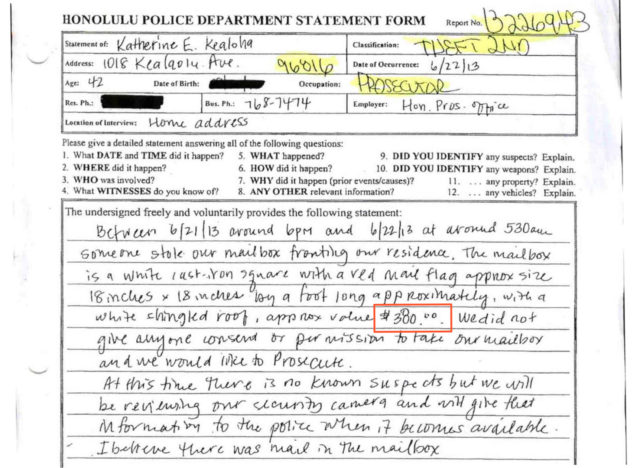 And here’s a picture of what that particular mailbox actually looked like: 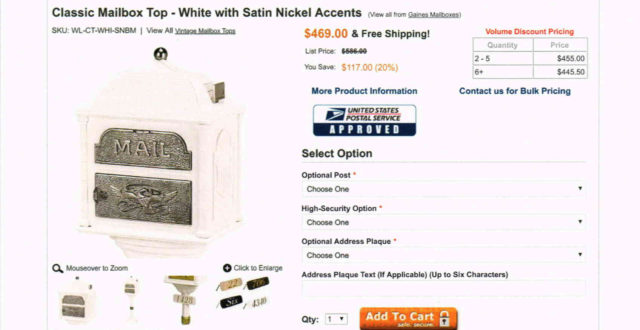 The dollar difference between the Gibraltar mailbox and the Gaines brand is key because at the time, the threshold in Hawaii for a felony theft case was $300.

Anything above that amount meant a stiffer potential punishment for the perpetrator.

Here’s an excerpt from Katherine Kealoha’s written statement about the theft in which a handwriting expert says the dollar amount on the mailbox appears to have been modified. Pay attention to the “8”:

The handwriting expert testified that the top circle seems to have been added after the fact.

The construction — or rather destruction — of the Kealoha mailbox also became a point of contention.

One of the government’s witnesses was Derrick Dry, a product engineer who used to design and test mailboxes for Gibraltar.

He told the jurors that the way the mailbox came apart in the surveillance video didn’t seem physically possible given all he knew about how the mailbox was put together. Here’s that video:

Dry said that the top shouldn’t just come off like it does in the video. The break point, he said, is at the base not the top.

He also estimated the person looking to break the box would need to exert up to 25 pounds of force to snap the pedestal. The man in the video didn’t seem to do that, he said.

A Man With A Beard?

On June 7, Day 12 of the prosecution’s case, former FBI agent Noel Herold testified that he was able to enhance the quality of the surveillance video taken from the Kealohas’ home the night of the mailbox theft:

Herold also took still images from the video and highlighted the suspect’s face so that the viewer could make out out specific details.

“Would it pick up sideburns or facial hair of somebody who hasn’t shaved in awhile?” Assistant U.S. Attorney Joseph Orabona asked. 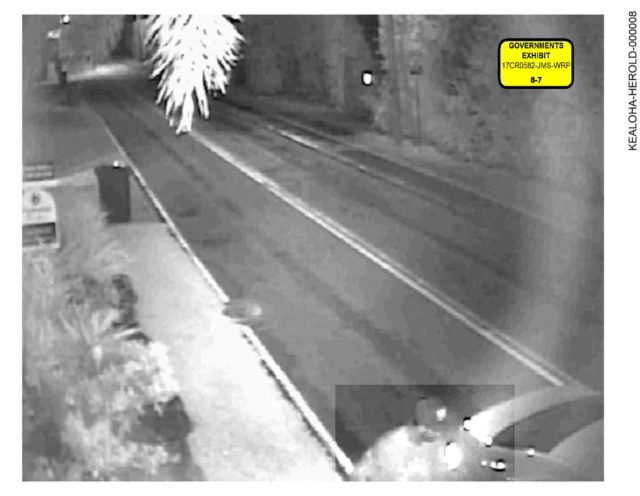 Gerard Puana was clean-shaven both before and after the mailbox theft. Here’s a photo of him the day he was arrested. Family members who testified on his behalf also said Puana didn’t like wearing hats because he liked the way his hair looked: 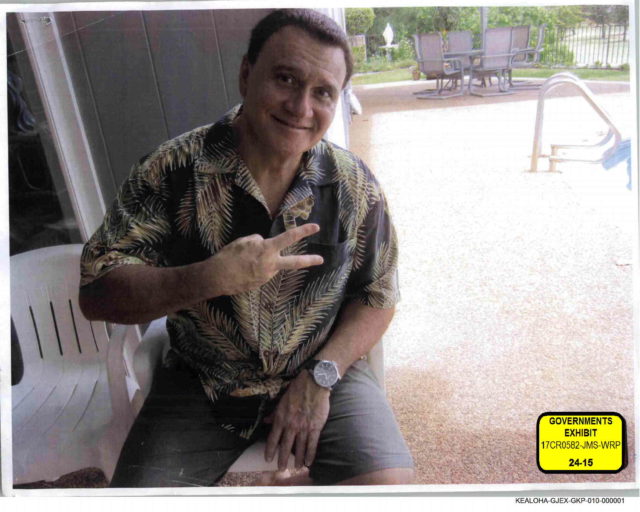 For nearly a week someone filmed ceiling tiles and a wall inside the Honolulu Police Department’s Criminal Intelligence Unit.

Occasionally, a CIU officer’s face would appear in the footage:

Federal investigators were able to recover the images from a hard drive that was used to record surveillance video from the Kealohas’ home the night their mailbox was stolen.

What’s notable about the CIU footage, though, is when it was shot.

The filming began one day after Gerard Puana’s defense lawyer obtained a court-ordered subpoena for the surveillance video from the Kealohas’ home.

Silvert was eventually told the footage he wanted — video from the day before the theft — didn’t exist.

As one FBI expert testified, the only way to permanently delete video from a hard drive is to record over it.

The bottom line is that any evidence showing what happened to the mailbox the day before it was stolen, such as someone loosening it, has disappeared.

What the hard drive did show, however, was that there was footage of the Kealoha driveway at other times before the mailbox theft and after it. That’s how federal investigators knew they found the right device.

They even captured video of one of the alleged co-conspirators, CIU officer Minh-Hung “Bobby” Nguyen, delivering a hard drive to the Kealoha household just days before the mailbox theft:

If there’s one thing federal prosecutors want to hammer home for the jury, it’s that Alison Lee Wong does not exist.

They’ve called several witnesses and introduced loads of evidence to prove Wong was merely a figment of Katherine Kealoha’s imagination, an alter ego used to carry out her alleged financial schemes.

For instance, Wong was the notary used to sign specific documents that federal prosecutors now say are forgeries.

Rick Ornellas was one witness in particular who had a bizarre encounter with Wong.

He says he never met her in person or talked to her on the phone, but on Sept. 21, 2011, Ornellas received an email from Wong inviting him to a party at the Plumeria Beach House restaurant at the Kahala Hotel & Resort.

The subject line of the email was “KPK return” and Ornellas knew the initials stood for Katherine Kealoha, a friend he had known for nearly 20 years: 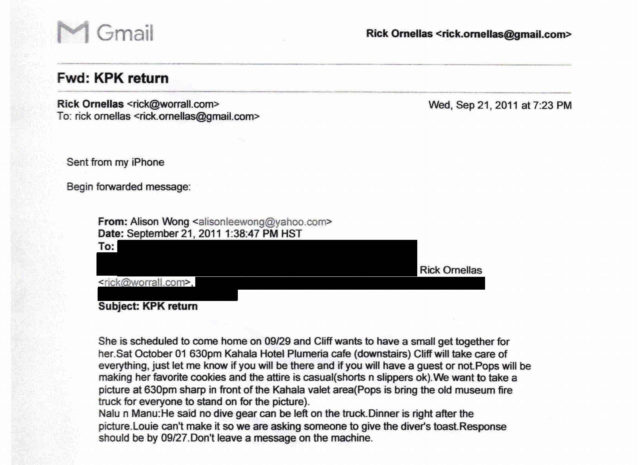 Ornellas was confused. He had no idea who Wong was, nor did he have any friends who went by the names “Pops” and “Cliff.”

Although the government redacted the names on the exhibit, when it was shown in court one name that stuck out on the recipient list was Jesse Ebersole. He’s the Big Island firefighter who pleaded guilty in July 2018 to a federal conspiracy charge for lying about his affair with Katherine Kealoha.

Three minutes after Ornellas received the first email from Wong, he got a personal follow-up explaining who she was: 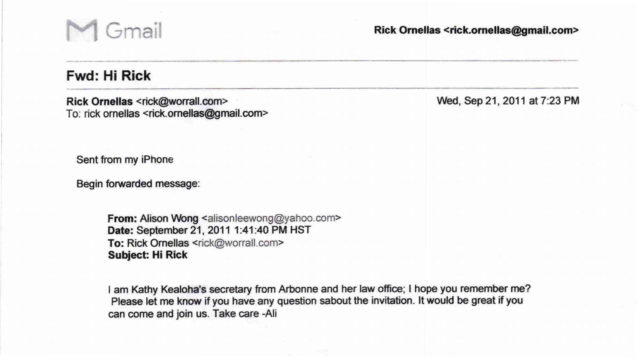 The next day Ornellas asked Wong to call him, sending her two separate emails with the same message:

Mainly he wanted to know whether he should bring gifts or lei for the occasion.

The response he received from Wong was surprising. Cliff, a man he had never met or heard of, had suffered a heart attack. The party might have to be put on hold: 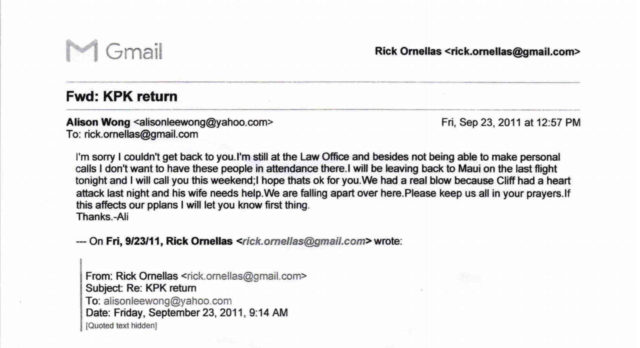 Still, Ornellas, who worked in security, reached out one last time:

Asked on the witness stand whether he ever received that return phone call, Ornellas’ response was simple.

A key component of the Kealohas’ alleged motive is a lawsuit Gerard Puana and his mother, Florence, filed against Katherine Kealoha in March 2011 that accused her of bilking them out of hundreds of thousands of dollars in large part through a reverse mortgage scheme.

Kealoha was supposed to use the money from a reverse mortgage on Florence’s house to buy her uncle, Gerard, a condominium and use the rest to consolidate her debts.

Instead, the government says she used that leftover money to pay for a lavish lifestyle that went beyond her public servant means.

Terry Ewart was the real estate agent who helped Katherine Kealoha purchase the condo for Gerard.

Ewart testified about a $7,000 check cut to Kealoha for a commission on the sale, since Kealoha had done much of the work: 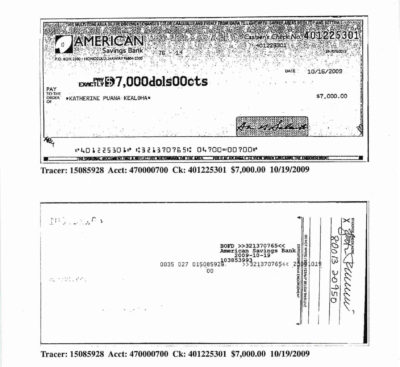 According to the government, Kelaoha deposited the money into her own bank account. She then turned around and cut Ewart a $7,000 check from a joint account she held with her grandmother. The money she sent back to Ewart had come from the reverse mortgage: 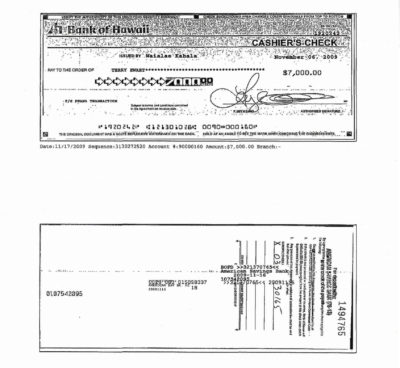 Ewart said that when Kealoha returned the $7,000 she told her she didn’t feel like she deserved the commission because all she was doing was helping her family.

“Did she tell you she would never take a penny of her grandmother’s money?” Assistant U.S. Attorney Michael Wheat asked.

“Yes, she did,” Ewart responded.

Maui Commission Debates Whether To Hire Next Police Chief In Private

SLIDESHOW: Diving For Tires And Trash In Kaneohe Bay