'We Were The Best Of Friends': Gerard Puana Testifies In Kealoha Trial - Honolulu Civil Beat

Gerard Puana took the witness stand in the U.S. District Court of Hawaii on Wednesday and was asked a simple question by Assistant U.S. Attorney Michael Wheat, the special prosecutor in what has become one of the largest public corruption scandals in Hawaii’s history.

On June 21, 2013, did you steal a mailbox belonging to Louis and Katherine Kealoha? 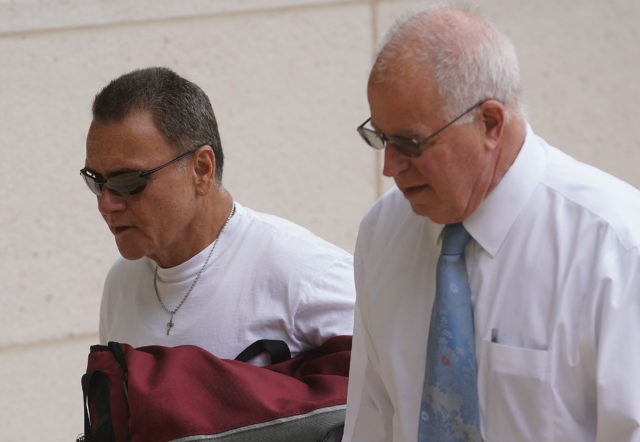 It was the first answer of many Puana gave during several hours of testimony in the federal government’s criminal case against the Kealohas and three Honolulu police officers — Derek Hahn, Minh-Hung “Bobby” Nguyen and Gordon Shiraishi.

They are accused of framing Puana for the theft of their mailbox as a means to undermine him in a civil lawsuit he and his mother, Florence Puana, filed against Katherine Kealoha in March 2013. Gerard Puana is her uncle.

The Puanas accused her in their lawsuit of stealing hundreds of thousands of dollars from them via fake investment schemes and a reverse mortgage deal on Florence Puana’s home.

According to the federal government, that lawsuit threatened to expose the Kealohas’ alleged financial crimes and became the motive behind the attempted frame job. Louis Kealoha was then the Honolulu police chief and his wife was a high-ranking city prosecutor.

Gerard Puana’s story began in January 2007 on the Big Island where he said he was celebrating his birthday with his family.

He said that’s when he learned his niece, Katherine Kealoha, could invest his cash savings for him, money he collected from years of disability payments from the government and frugal living inside his parents’ home.

Puana said Kealoha convinced him to give her $25,000 for an investment hui that would pay out anywhere from $400 to $600 a month after a preliminary three-year lockout period in which he couldn’t touch the principal.

“How would you describe your relationship with Katherine at the time?” Wheat asked. 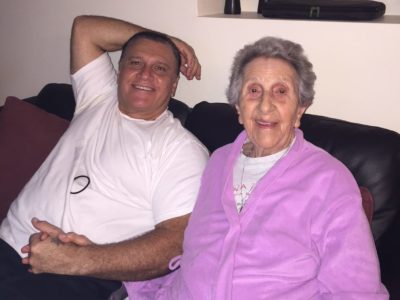 Gerard Puana and his mother, Florence.

“What do you mean you were the best of friends?” Wheat asked.

“We were seeing each other on a daily basis,” he said.

Puana testified that he would often go to his niece’s home in Kahala, where she lived with Louis, and help with work around the property. He even dug the hole and poured the cement foundation for the mailbox the Kealohas would years later accuse him of stealing.

He made it clear, however, that he did not install the actual mailbox. That work was left up to his brother, Rudy, Katherine’s father.

The relationship between uncle and niece continued to blossom. He said he gave her another $15,000 to invest in her hui. They even gave each other nicknames. She was “Katsters” and he was “Uncle Gerrsters.”

Not long after, Puana said, his niece approached him and mother, Florence, about obtaining a reverse mortgage on her home.

Much of the money would be used to buy Gerard a condominium, one that held sentimental value for him because it was the first home he had brought his son back to after he was born.

The rest of the money, he said, would go toward helping Kealoha and her husband consolidate their debts.

At first, Puana said he and his mother were skeptical. They didn’t feel it was fair for him, one of her nine children, to benefit along with his niece while the remaining siblings received nothing. 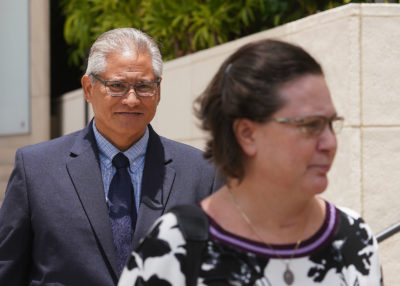 He said that when Katherine tried to convince them to go along with the plan to get a reverse mortgage, she brought Hawaiian food to the home on Wilhelmina Rise that he shared with his mother.

“At that time did you understand what a reverse mortgage was?” Wheat asked.

He said Kealoha convinced them that the reverse mortgage would be temporary and that she would have it paid off in six months. Kealoha, who had her Realtor’s license, would execute all the paperwork and Gerard would pay her a monthly mortgage payment minus the earnings from his cash investments.

The three of them decided to move forward, although they agreed to keep the deal secret from the rest of the family.

“We really respected her, trusted her wholeheartedly,” Puana said. “We thought that she was wonderful, the best.”

By 2011, Puana and his mother had already begun to suspect something was amiss with their finances, and Kealoha had gotten less communicative.

That June, Puana was arrested for unauthorized entry into a neighbor’s home after a disagreement over parking. He said he lost his cool because one of his neighbors kept parking in front of the stairs in front of his mother’s home, which made it hard for her, 92 at the time, to get in and out of the house.

After he was sent to jail at the Oahu Community Correctional Center, he said his niece would organize surreptitious meetings with him at the courthouse using a contact of hers in the Hawaii State Sheriff’s Office. 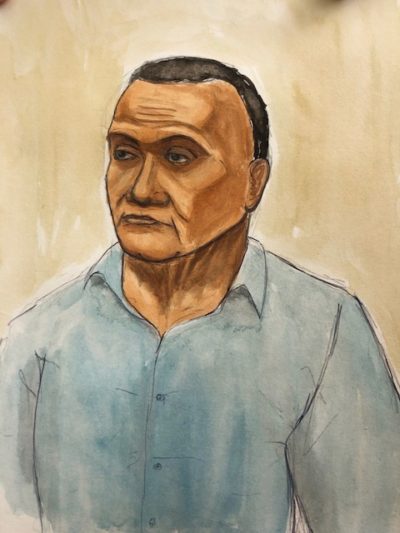 During one of those meetings, he said Kealoha told him it would be in his best interest for his case to agree to go to the Sand Island Treatment Center for drug rehabilitation.

Puana said she also said that after he was arrested she went into his house and took a hair sample from one of his brushes. The results, she told him, came back positive for meth.

Puana said during his testimony that was impossible because he had quit using years before after promising his father, who died in 2002, that he would kick the habit.

Still, Puana believed his niece when she told him drug treatment would be better than jail time.

While at Sand Island, Puana said he learned that he had unwittingly signed up for a 2 1/2-year commitment, something he didn’t understand when his niece convinced him to go there in the first place.

He said he immediately asked to go back to OCCC.

Puana ultimately spent 71 days in jail before family members — some who say they were told by Katherine Kealoha not to contact him — learned of his situation and came to bail him out.

He said that while he was in jail he learned that someone had taken property from his home, including baseball hats with HPD logos, a memory card from his digital camera, switchblades and a cap gun.

A year later on Halloween, he said, he received a package from Kealoha with many of those missing items returned to him.

‘All I Would Get Is A Ukulele Solo’

By 2012, Puana said he and his mother had learned of Kealoha’s deception.

Although she bought the condominium, she never paid off the reverse mortgage, which ballooned to more than $600,000 due to the interest. He said he and his mother repeatedly tried to call Kealoha to find out what was going on, but all they heard on the other end of the line was Hawaiian music.

“All I would get is a ukulele solo when you dialed the number,” Puana said.

On June 21, 2013, the Kealohas’ mailbox was stolen. Puana said he had no idea a crime had been committed. But he testified about all the police officers who had begun tailing him.

He said he started taking pictures of the cars and even called a relative who used to work as a prosecution investigator on the Big Island.

He said one night, the two of them decided to test his theory that he was being followed. They got in a car and drove down Wilhelmina Rise. What followed, Puana said, was a “caravan” of cops.

Days later, on June 29, 2013, Puana was arrested in a church parking lot by a unit of Honolulu police officers who typically work in Waikiki.

Puana’s testimony, which continues Thursday, has been some of the most anticipated of the trial. Most of the seats in the courtroom were filled with observers, including by Puana’s civil attorney Eric Seitz, who has filed a federal lawsuit against the Kealohas and several HPD officers, including their three fellow defendants.

That evidence then led to the U.S. Justice Department launching its own investigation into public corruption and abuse of power within Hawaii law enforcement.

The case has since expanded beyond the alleged framing of Puana and into other areas, including accusations of bank fraud, identity theft and drug trafficking, which are the subjects of separate indictments and upcoming trials.

During cross-examination, Cynthia Kagiwada, who represents Katherine Kealoha, painted Puana as a middle-aged man who didn’t have a job and was living off his mother.

She repeatedly asked Puana if he had any documentation showing he gave her client the large sums of cash he said he handed over to her for her investment hui.

Kagiwada also asked about $30,000 he said he gave Kealoha for “safekeeping” and why he would opt to remove it from a safety deposit box to give to her.

“It’s just your word that you took money out of that safety deposit box?” Kagiwada asked.

Puana said he kept a record in his journal and on his calendar, but that there was nothing else.

Puana said he’d been living at his mother’s house since 1995 and he had been “saving every penny that I had.”

“I was not paying rent,” he said. “I was just helping out with utilities. I never traveled. So I had the money. It wasn’t like I was spending it.”

Kagiwada pressed Puana about the fact that he hadn’t held a job since 2001, and asked if his mother was paying for his expenses. She showed the jury photos of checks Florence Puana wrote to her son or to other people on his behalf.

He said he and his mother exchanged money all the time for utilities, groceries and other work around the house.

He sometimes loaned her money, he said, and she would reciprocate, which explained why she sometimes covered his mortgage payments prior to buying the condominium.

Ige’s State Of The State Speech Skips The Difficult Details